Heavy metal backbeat vs. the classics.

Bassist Kit Barlow doesn't have time for romance. He's holding down two jobs and playing in a heavy metal band -- while raising his seven-year-old son by himself. But when Ebon joins the Cub Scouts, Kit can't help but notice his group leader, Max Hill.

Max is everything Kit likes in a man: tall, dark, and determined. The two men come up with a way to keep their nosy families from trying to set them up with every available man in the city: they'll pretend to be dating each other.

In between the afternoon pool games and the Sunday mac 'n cheese, Kit and Max find their pretend romance is developing some real heat. There's only one problem now -- Kit finds out Max despises rock and roll music.

How's a heavy metal rocker supposed to woo a man who only likes classical music? Can they make their relationship work, or will they find their differences hit a sour note? 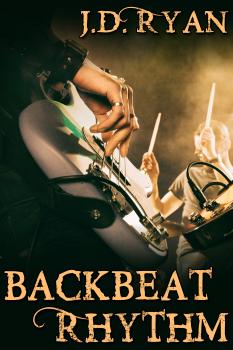 Max belatedly realized that his sister had said something to him. "Er ... what was that, Renata?"

"Honestly, Max, you were miles away. I hope you weren't thinking about work on your time off."

His mother leaned forward, brandishing her fork. "Were you daydreaming about someone, young man?"

Ariana put a hand to her face. "He was! Max is interested in someone."

"Who is it?" Sophia asked. "Is it serious? How long have you known him?"

Max wanted to shove away from the table and head for the front door. "For Pete's sake, it's nobody."

"Nobody we know, you mean." Mom nodded in a way that had the hairs on Max's nape bristling. "Did you meet him at work?"

"I mean I haven't met anybody. I don't have time to meet anybody. I was just thinking about ... something else."

"Mmm-hmmm." Mom's gaze bored into him like a dentist's drill, setting his teeth on edge. She nodded to his sisters, and four pairs of eyes turned his way. "Now, you just tell us all about him."

Between the four of them, the women soon wormed the details out of Max. Sophia was unexpectedly excited. "I work with Valerie Barlow and she's got a brother and a nephew. I'm sure it's the same man. He's gay, too. Val is always trying to hook him up with the male nurses or doctors."

"So what? I still don't have time for that sort of thing." Max pointedly cut into his slice of roast, which he realized had grown cool. Kit Barlow had made him miss his dinner.

Maybe he should just bite the bullet and arrange to be in that park this coming Tuesday. Kit had somehow taken hold of his interest. If he was going to daydream about the man, he might as well meet him for real. After all, they'd hardly be dating. Just a nice, adult conversation once a week or so.

What could go wrong?

She reached across the table to slap his arm. "Max Hill, you doofus. You ought to ask him out."

"You never give up, do you?" But Kit's mind was racing. Max Hill, gay? The hottie currently starring in Kit's fantasy love-life actually swung the same way Kit did? Maybe God was good after all.

Ebon made a face. "You're going to go out with Mr. Hill? You're not going to kiss, are you? That's gross."

"For your information, young man," Val said, swatting Ebon's arm in turn, "grown-ups like kissing. You'll figure it out once you're older."

"You guys always say that. I'm already seven and I still think that stuff's gross."

"And I'm not going out with anybody," Kit said, grabbing another slice of bread. "I don't have time for that sort of thing."

"You know, that's exactly what Sophia says about her brother. He doesn't have time for a social life. The two of you are so alike."

They really did seem to have a lot in common -- well, except for that unfortunate hatred for Kit's brand of music. Of course, Max had said it didn't bother him when his nephew listened to AC/DC. Maybe he ought to try to run into the man again some afternoon, now that he knew where he usually ate lunch. How much trouble could that be, after all? It's not as if they'd be dating -- just having the odd conversation in the park once a week or so.

What could go wrong?