Riva Corley needs a girlfriend. Not because she wants one, but because her boyfriend, Benton, is pushing her to kiss a girl in front of him. Afraid of losing Benton, Riva agrees to try, but she never expects to find a girl she actually likes and wants to kiss for her own reasons.

Daisy Mejia has stayed closeted for all of high school so far -- it seems pointless to come out for a kiss that's destined to go nowhere. Daisy also has no desire to put on a show for Riva's boyfriend. But she's had a crush on Riva Corley forever, and Daisy can't pass up this chance.

Before long, what starts out as a bad idea begins to look more like a relationship. Soon, Daisy must decide how much trouble she'll put up with, and Riva has to figure out what it means when she's falling for another girl. 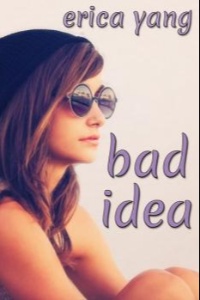 Riva's arm tingled in the spot where Daisy had touched her. They stood closer than before. The heat of Daisy's side warmed Riva's. They ordered the shake, then took it to a counter in the food court, where they sat too close for Riva's comfort but not close enough for her desire.

Daisy watched Riva take the first sip of the blueberry shake. Riva felt seen in a way she wasn't used to. Part of her wanted to feel like that a lot more, and part of her wanted to close off and never feel that way again. She remembered being scared with Benton, too -- having feelings for another person was fun and exciting, but it didn't seem safe to her.

Riva's hand shook as she passed the shake to Daisy so she could taste it, too. They didn't break eye contact as Daisy slipped her lips over the end of the straw. "Is it okay?" Riva wasn't sure exactly what she was asking. Nothing was wrong -- she was having a great time -- but she couldn't quite believe that nothing was wrong.

"The blueberry? Yeah, it's good." Daisy casually set the shake on the counter beside them, then rubbed the palm of her hand against her shirt, leaving a few drops of moisture behind. Every movement she made seemed hyperreal to Riva, as if it would be impossible to forget later. This had also happened with Benton. In the early days of their relationship, Riva had often gone to bed at night and replayed every nuance of his facial expressions, analyzing them and snatching any excuse they gave to glow with pleasure or fret with insecurity.

"What about you?" Daisy was asking, forehead creasing with concern. "Is the blueberry good?"

Riva took another sip. It was good, creamy and sour-sweet in just the way she liked, with plump bits of blueberry mixed in. But she could barely focus on enjoying it with Daisy in front of her and what they'd agreed to do hanging constantly in the air. "It's great," Riva said. "You're great."

"But I'm nervous," Riva admitted. "I don't know how to act around you anymore."

Riva shook her head. "That won't work anymore, and you know it. Everything's different now." Her voice didn't want to work. She had to force the last few words out. "The way I think about you ... It's not the same."

Daisy had that pained expression again. "I really don't."

Sighing, Riva hunted for some way to express herself. "When I met Benton, there were all these things I'd never felt before. The things that made me think I was falling in love."

"I don't know what it means that I'm feeling them about you."

Blinking, Daisy drew back. "You're saying you're falling in love with me?"

Riva stiffened, glancing around involuntarily to see whether anyone had overheard. She didn't want to give Daisy the wrong idea about what was going on. She wasn't sure what it would mean if she was in love with Daisy, but she was pretty sure things couldn't go on the same way with Benton. She wasn't ready for that. "No! I'm just saying I don't know what it means."