Recipes are a way of life for Gwen Jones. Take one single mother, her infant daughter and a business plan for a small town bakery. Combine with an eventful cross-country flight, chance encounter with her college crush and a dash of motion sickness. Stir in a few nuts, or family members, and large quantities of chocolate. Will this recipe be an oven oops, or as delicious as her alma mater’s newest coach? Having survived an attack in Afghanistan that cost him a leg and a wife, Kyle Collins developed a strategy to find meaning in life. He may be an assistant basketball coach but he refuses to sit on the sidelines. When he runs into the woman whose lips are as unforgettable as her brownies, Kyle decides to spice up Gwen’s recipes. When a secret ingredient is thrown into the mix, can their recipe for a happily-ever-after rise to the occasion, or will it end up a hot mess? 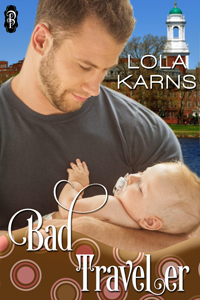 "Be ready to be seduced by the latest release from Lola Karns. Bad Traveler provides the sweetness of a sinful chocolate cookie with the head rush of March Madness. You will feel for this single mom on her quest to achieve a stable environment to raise her child. She is determined to not let her past define her future. Add a spark of romance to the story and the bakery oven isn’t the only thing that heats up. A fast-paced read that will leave you wanting more from Lola Karns!"

“Or we could go to my shop, drink some coffee or have cookies and milk. I have my keys.”

“Perfect.” His heart thumped as he put the car in gear. No one would bother them. They would be alone in a cozy space she’d created. The absence of students left the streets virtually empty. Her gloved hand covered his for the five-minute drive. After a few turns, they parked behind the store and entered through the kitchen.

“What will you have? Unfortunately, I have tons of inventory left from today.” She opened the back side of the display counter, revealing about a dozen or so of six different types of cookies. “I swore I wouldn’t sell day-old cookies, but I may bundle up some at a discount rate tomorrow since there are so many.” The touch of sadness in her voice made him want to whip out his wallet and buy them all up.

“I’ll take an oatmeal raisin, a chocolate chip, and…. Are those ginger snaps?”

“Actually, those are molasses cookies. They are spicy like a ginger snap, but different.” She stacked an assortment of cookies on a plate. “It’s my nana’s recipe. See what you think. Coffee?”

“Don’t make coffee on my account. I’m too wired already. I’d rather have milk.”

“Me, too.” She poured milk into a couple of mugs and started toward the corner table, which featured a plush, secondhand love seat. He followed with the cookies. A rapping on the window drew their attention to a couple outside. Gwen pointed to the Closed sign, but the couple persisted.

He walked to the door. “We’re closed.”

She rushed to his side, adding, “We’ll be open Tuesday at seven a.m. We hope to open in the evenings starting in late January.”

The couple walked away.

“I could have made a sale, but….” She sounded frustrated and tired.

“I think we should stay in the kitchen. I doubt people will bother us if we have lights on back there.”

A spark returned to her eyes. “If we sit on the floor behind the counter, no one will know we we’re here. They’ll think someone left the lights on by accident.”

Sitting side-by-side on the floor, backs against the counter, they set the plate of cookies between them along with their mugs of milk, handy for dunking. He picked up the firm molasses cookie with large pieces of sugar that stuck to his fingers. The crisp outside yielded to a softness that melted in his mouth. Sweet with a hint of saltiness to make it interesting, just like Gwen. Tonight, he’d see if she would melt in his arms, and his mouth. It was his night.