The Town of Pearl 9

The Town of Pearl 9

Heat Rating: Sextreme
Word Count: 49,580
48 Ratings (4.4)
Contemporary Menage a Trois/Quatre Romantic Suspense
In Bookshelf
In Cart
In Wish List
Available formats
ePub
PDF
HTML
Mobi
Cover Art by Les Byerley
Buy Audio Book at:
Amazon | Audible
Reviews
I struggled with this book. Characters have cardboard personalities, the chauvinism is increased to the point that female seems to be equivalent to incompetent. The heroine, an acknowledged much admired cop, is forced to give up her gun when people are trying to kill. I think because they thought she wasn't stable, due to her drawing the gun when she was startled once. The excuse seemed flimsy, and a plot device to put her to a disadvantage, thus needing the 'heroes.' I really hated the guys in this book. None have personalities outside of being sexist horny guys with a hard on for being seals. We are told about them being in the military so many times, but there is practically nothing else described about them. We know they are buff and one ex girlfriend got into an abusive relationship. Dixie Lynn dwyer aspires to large menage relationships that are such a deterrent to her quality of story. Avoid this book; it'll be aggravating with no hook or redeeming qualities. Her earlier books with three or less heroes are much better. Each book she publishes is getting worse, turning into mushy cardboard characters with the same plot in each book. The only thing that changers are the names of the heroes.
Lindsey
A good book but would have been better if a bit longer it seemed rushed. I loved the characters
Jlg29
Read more... 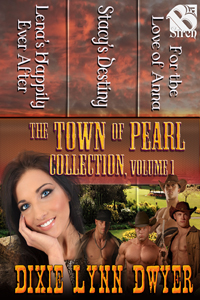 Lauren Michaels stared at the old sheet of paper. What was once a daily ritual had gone to nights when she was overwhelmed with emotion from a call, a situation, or upsetting circumstance on the job. The poem she wrote months after the home invasion had been an idea her therapist thought might help her. It hadn’t helped her sisters Carly and Daisy. The circumstances of their parents’ death had made them timid and shy. They were only young girls when it happened. Lauren was twelve, Carly was ten, and Daisy was eight. They had years of counseling, assistance from their wealthy Aunt May, and help from some family friends. But once Lauren graduated from the police academy at twenty, she took over as provider, and they left their aunt’s house to live in their own place.

Lauren had seven years on the NYPD police force. Five and a half of those years were spent becoming a knowledgeable homicide detective. She thought about that as she prepared to get out of her car.

She’d worked some seriously sick cases. Things most people would shudder at or become sick from, she embraced. She wanted justice. She sought justice for victims and their families because that was what Commander Jonathan Mathews had done for her and her sisters. Lauren had killed three men that night, and two others got away. She saved her sisters, but she hadn’t been able to save her parents. That was something she had lived with her entire life. It was her motivation to seek justice for victims and to try and stop crime before it happened. But she was always on edge. She tried hiding it from her coworkers, her sisters, and friends, but that edginess was doing a number on her. She was getting tired. Tired of the violence, the smell of death, the sight of blood, and the gore and evil abilities of mankind.

The badge of honor was wearing her down. She was questioning the legal system, and becoming angry at how the most violent, repeat offenders continued to slip through the system or get off with a slap on the wrist. Politics. She hated fucking politics.

As she sat outside her aunt’s house preparing to get together with Mary Higgins, an old friend of her aunt’s from Texas, she wondered how much longer she could go on like this. Her sisters were busy with their lives, their hopes of opening up a coffee and sweets shop somewhere, and they were trying to finish their schooling.

Lauren was still working to raise the money they needed to help them make their dreams come true because she was the oldest, was their provider for many years, and the leader of the house. It was a lot of pressure, but considering she didn’t have much of a social life, she had plenty of time to take overtime and even walk the beat like some rookie cop.

She took a deep breath as she looked at the old home in Bayside, Queens, New York. It was all brick, with a fancy front entryway from the sidewalk. It had three bedrooms and a large yard, but was so very different from their parents’ estate in upstate New York. But quickly, the brick-style home in the city had become their new home, and a new way of life. From learning the streets and subway routes to taking mass transit busses and taxis, her and her sisters learned the hustle and bustle of the city and all it had to offer. Talk about becoming street smart, Lauren embraced the city life, and the people both good and bad. Her sisters avoided them as much as possible. They rarely went out and attended private schools with the help from Aunt May who knew that Lauren couldn’t afford the tuition on a cop’s salary.

Lauren loved being a cop, and once she graduated from the academy she was like a sponge for knowledge. She asked Commander Mathews to take her under his wing and help her to be the best cop out there. Here she was, seven years later, still feeling that need to serve but getting tired of the violence. For every case she helped to solve, another dozen or more stood in line to be handled. It was never ending, like a pile of quicksand slowly draining her of everything else. Homicide had become her life, her every breath, and she was slowly going under. The badge felt heavy lately. Especially now with the undercover case her and her partner were working on. One undercover officer had turned up dead. Another was beaten into a coma. She shook her head. Aces and his crew of shit from Tenth Street gang were behind it. She just knew they were. But without proof, and with an ongoing investigation including the state police and Feds, her and Frankie couldn’t do a thing about it.

She got out of the car, taking a deep breath of air. She locked her car door and headed along the sidewalk and up the walkway. She could hear the music coming from the house and she smiled. Her aunt had a special way about her. She reminded her so much of their mother, even though Aunt May had brown hair and their mom, Louise, had blonde hair. They shared the same smile, the same blue eyes, and that classiness and sophistication Lauren fought from showing. As a cop, a detective in New York, she needed to be tough. Talk tough, walk tough, and act like she could kick the world’s ass if someone messed with her. She was getting tired of fighting. Tired of being on edge, and not knowing what was coming next. She was getting burned out.

When others turned to alcohol to clear their minds of the gruesome acts of violence, she turned to exercise and running, working out. She took a deep breath and released it as she reached for the doorbell.

Lauren accepted Gus’s hand as he helped her into the shower. Behind her Harper finished undressing and she couldn’t seem to wait for him to be in here with her, too. It was so strange how comfortable she felt with all five men. They were all nearly fully clothed and there she was naked and aroused before them like some offering and feast.

The thought made her pussy spasm as Gus turned her around to face the water, and to let the multiple showerheads cascade over and around her. The heads of the shower were everywhere hitting her most intimate parts and arousing her even more.

She moaned softly as Gus spread her thighs and stepped against her, his long, thick cock between her ass cheeks.

“You’re gorgeous, Lauren. So fucking beautiful,” he said and then began to wash her hair, and massage her scalp. It felt wonderful.

She closed her eyes and allowed the soap to rinse from her hair when she felt the washcloth, soft and soapy against her breasts, and Harper squatting down in front of her. His lips touched her belly, her ribs, and the scarring she had. His hands, combined with Gus’s as they explored her body, lathered up soap, and massaged it into her aroused skin, was overwhelming.

“We’ll give you more. We’ll give you all of us,” Harper said as he stroked a finger between her pussy lips and then pressed upward.

Lauren gasped and then began to lift and lower over his fingers, riding them.

Behind her Gus massaged her ass cheeks and then licked and nibbled against her skin from her neck, down her back to between her ass cheeks.

“Are you on the pill or do we need protection?”

“I’m on the pill.” She moaned and then gasped as Gus licked along her anus.

He leaned against her.

“That’s great, because I’m going to explore this ass while Harper fucks that tight, wet pussy, baby. Tonight you’re all ours.” She felt the tip of his finger push against her puckered hole and she widened her thighs and gave him access to her ass. Harper pulled his fingers from her cunt and then she felt Gus’s fingers thrust over her cream and up into her pussy then back over the puckered hole and into her ass.

“Gus!” she yelled out and Harper cupped her cheeks and kissed her as Gus used his finger to fuck her ass. Harper lifted her up and against him. She used her leg muscles to lock around him and then suddenly Harper was lifting her higher. She felt the thick, bulbous head of his cock against her leaking pussy and she took him in. Inch by inch as she moaned and gasped, instantly full with his cock halfway in her cunt and Gus’s finger stroking into her ass.

“That’s it, baby. Fuck you’re a wild one aren’t you? You like a cock in your pussy and one in your ass?” Harper asked her.

“Yes. Oh God I never, but damn, Gus, it feels so strange and wild,” she confessed as she gripped Harper’s shoulders and began to ride him lifting up and down.

She was losing control and shaking as Harper fucked her harder, faster, and behind her Gus thrust his finger in and out of her ass as he suckled her skin and talked dirty to her.

“I’m going to fuck this ass good tonight. We’re all going to have a chance to fuck this ass and this sexy cunt of yours. We’ve been waiting, baby. Watching this tight ass in those sexy spandex pants of yours, never mind the short shorts. You’re toned, muscular, and fucking hot. You ready to get fucked in every hole? You ready for a cock in that sexy mouth?” Gus chanted then used his other hand to cup her cheek and then press his finger into her mouth. She was so aroused, so turned on by the picture he was describing that she sucked his finger like it was cock. 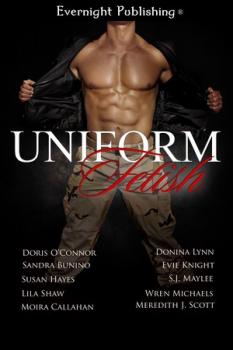