A worldwide snowstorm that brings with it a terminal virus.

But something deep within hasn’t died. The thing they loved most when alive still burns bright, at odds with a predacious hunger they can’t control or understand.

Have survived The Blast.

And time is running out for Amanda! 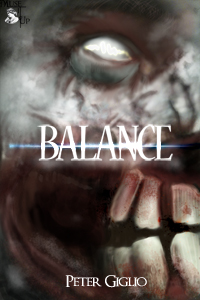 “Balance is a grim and melancholy zombie story. Peter Giglio brings his A-game to this disturbing tale.”—Jonathan Maberry, New York Times Bestselling author of Dead of Night and Dust & Decay

“A harrowing new perspective on the apocalypse. Giglio goes for the heart as well as the jugular.”—David Dunwoody, author of Empire’s End and Unbound & Other Tales

Joe unlocked the deadbolt, pulled the door open, and Ruby rushed in.

Cowering by the base of the couch, the girl shouted, “Close the door!”

Gripping his gun, Joe stepped into the hallway. Florescent lights buzzed and flickered overhead. At the end of the hallway there stood a gray-haired woman in a dirty housedress.

“Sounded like someone was running through the hall,” she said in a coarse, accusatory tone.

“You haven’t been chasing after a child, have you?” Joe asked.

She shook her head, pointing down at his gun. “What the hell’s the gun for? You haven’t gone crazy or—”

Suddenly, an arm came around the corner of the hallway and wrapped around her throat. Another arm appeared, its hand splayed across the woman’s temple. With a quick twist and snap, the old woman’s body crumpled to the floor and began to twitch.

Her assailant emerged. It was another woman. Her head was angular to a freakish degree, and the way she moved was unnatural. She clumsily stepped over the dying woman, and then began limping toward him.

“Who the hell are you?” he barked.

Joe stole a glance into the apartment: Cass was cradling the terrified child. “You’re burning up, sweetie,” Cass soothed. “Don’t worry, Joe and I will take good care of you.”

Her mother. Joe shuddered. What the hell is going on here?

The woman was closer now, and he could see her features. She looked… No, it wasn’t possible!

Her eyes were pallid, glazed over as if consumed by cataracts, and her skin was an ashen, ghastly shade of pale.

“What the fuck?” He leveled his gun in her direction and took aim.

The woman—the thing—moaned, deep and feral.

“Stop or I’ll shoot.” He had often fantasized about using the line. But now that he had, there was no luster to the realized dream, only terror. His breathing quickened. Swirling spots appeared before his eyes.

The thing didn’t stop. It advanced, arms held up and out in supplication.

Joe fired a warning shot above the woman’s head. The report rang through the corridor, the scent of cordite clearing his sinuses.

She dropped to her knees, clutching her ears, screaming. Had he hit her? Leading with his gun, he approached cautiously; the thing shrieked insanely.

Cassandra bolted into the hallway. “Joe, what did you—” Catching sight of the horror show, she ran back into the apartment.

Joe leveled the barrel of the gun at the woman’s head. “Start talking.”

A malevolent screech came from her gaping maw, her rancid halitosis of death burning his eyes.

Joe squeezed the trigger, stumbling from the recoil. Her forehead erupted into bone and blood. She toppled backward, mouth open, eyes wide. Like a bat out of hell, he raced back into the apartment as frantic footfalls echoed through the stairwell behind him, slammed the door, threw the dead-bolt, and slid down it, winded, his entire body slicked with sweat and his ears still ringing from gunshots.

Cass was holding the young girl and crying.

Joe got up and pushed a sideboard toward the doorway. “Help me, Cass.” He moaned.

Cass laid the little one on the sofa and joined him in the effort. They only stopped when the hutch blocked the door.

Joe steadied himself against a wall, tremors coursing through his body. “I know... I shot her.”
“No... I mean Ruby. She’s dead.”