Jake Farnsworth loves the outdoors and spends most weekends with his son Eric, fishing outside Saranac Lake, New York, having moved here from the city when Ellen got transferred to a managerial position with the bank in town. She is deeply involved with her church, volunteering for every function that comes along. Since Jake is agnostic, they spend little time together. Eric and his older sister Julia, don’t get along and constantly argue, which Ellen breaks up with little help from Jake. The two parents are aware that their relationship has turned south, but they aren’t sure how to fix their marriage. When Jake suggests going on a camping trip, it is met with skepticism. Ellen agrees, provided Jake joins them one Sunday at church. They go out into the national forest to camp at a lake Jake finds on the internet. When the trip goes awry, they find themselves lost and in a life or death situation. They must work together if they are to survive and return to civilization. 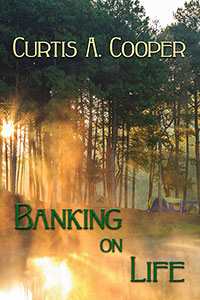 With Jake leading the way, the four family members kept in a fairly straight line, skirting trees, but maintaining a direct path. “This is a lot less dense than I thought it was. The satellite view made it out to look heavily wooded.”

“Definitely, though I wasn’t able to make out elevations.”

“So you didn’t know about this hill.”

Ellen was successful in making Jake wish that he had kept his mouth shut. “No, I didn’t, but we’ll have to start down, soon. The lake isn’t on the hill.”

By the sound of her words and breathing afterward, Jake could tell Ellen was beginning to get winded. He admitted to himself he was feeling the effects of the incline. He saw the crest just up ahead. “When we reach the top, we can stop for a few, okay?”

Ellen didn’t answer, but she kept walking. The two kids were doing much better. Even Julia wasn’t breathing hard.

Jake arrived at the top and saw a few decent boulders about twenty feet ahead. He thought that was a good place to stop and catch their breath. He walked down the hill to them and stopped, taking his pack off as he did. The others followed. Like it was choreographed, they all reached for their canteens and took a drink.

“How much further,” asked Ellen after quenching her thirst.

“Half a mile, tops. It should be all downhill from here.”

He looked at Ellen. What do you want? A guarantee? Other than get into an argument, he said, “Yes, I’m sure.”

“Look over there,” said Julia. She pointed at a black bear cub.

Jake saw it, but before he had the chance to say anything, Julia had gotten up and was walking toward it.

“Julia, no,” he cautioned sternly.

“Yes, but the mother could be—” Too late. The mother was charging toward Julia, growling fiercely.

Ellen screamed as Jake pulled out his knife and ran to his daughter.

Jake slipped in between the bear and Julia. “Run!” he shouted.