Young Willow was born in the Iron Settlement, one of several save zones built after the world as we know it was destroyed by war. He’s been pining after someone, a man who will finally acknowledge having feelings for Willow.

Handsome Jay is known as a traveler, a man familiar with all the dangers outside the safety of the settlements. This time, however, Jay’s battle is to overcome the injury that left him walking with a limp, which alienated him from people in the settlements.

Will Jay and Willow be able to move from a steady friendship to budding romance while they explore the dangerous ruins from before the end times? How will Jay react when Willow presents him with a rare gift? Can Willow learn to barter with Jay and earn the love he craves? 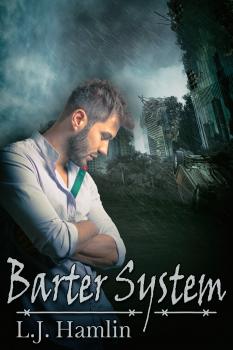 “I was thinking I like your smile, a lot, makes me want to kiss you,” Willow admits.

“Sweet Willow, you should make me work for that kind of information, barter with me, make me earn it,” Jay teases.

“Oh, but you are. Like a little lamb. Makes me feel like a wolf, ready to take advantage. So, like I said, barter. Don’t let me get my way too easily.” Jay gives him a sultry look, and he does remind Willow of the stories his mother told before she passed, of the big bad wolf and its smile.

“I should be insulted, but I know you don’t think I’m weak when you call me a lamb. You mean gentler, more innocent than you, and that’s true.” Willow hasn’t had an easy life. No one has had a perfect life since the end times -- life got harsher. He was sheltered as a child as much as his parents could, but he lost them young. They were claimed by a sickness no one knew the name of, not having the tests or treatments they once had.

“It’s not a bad thing, to be gentle. The world beat most of it out of me. Till I met you, I’d forgotten how to be anything but guarded. You gave me a part of myself back,” Jay says softly.

Lost for words, Willow lifts their joint hands and presses a kiss to Jay’s work-toughened hand, ignoring the dust he gets on his lips. If they’re out here come night, they’ll have to cover their mouths and noses with rags to avoid breathing in the dust.

They stay alert to the dangers of the surrounding area as they take a less often used path down through some old buildings they’ve been exploring. The area has been inhabited by a gang of bandits, till the king of the Iron Settlement had them driven away and killed, not liking how close they were to the city walls.

The buildings might be safe now, but Jay takes some homemade alarm systems, and together they stretch the wires over all the entrances. Then they start setting up their picnic, spreading a blanket on the dusty floor, as well as their treats.

Jay places a rolled up sleeping bag under his right knee, his leg stretched out, keeping his walking stick close to hand.

“I found something I want to show you later.” Jay smiles, popping a small bit of bread into his mouth.

“What is it?” Willow asks, looking over Jay’s body, half hoping that’s what he’ll be shown. Until now they’ve only kissed, but there’s so much more Willow wants to experience with Jay.

“Really? I got you a surprise, too,” Willow admits, excited by what he has hidden in his bag.

“You got me something? You didn’t have to.” Jay seems surprised. Willow knows Jay had grown used to receiving little kindness before he came to the Iron Settlement, and Willow wants to remedy that. He wants to show Jay the small beauties there are still to find in the world.

“I wanted to. It was something you said you hadn’t had since you were a child. It’s rare here.” Willow opens his satchel and produces a small jar, and he sees Jay’s eyes light up.

“Is that honey?” Jay sounds like he hardly believes it.

Willow nods. “I saw it in the marketplace. I knew I had to get it for you.”

“This is too much. It must have cost you too much. Please tell me you didn’t do anything foolish to indulge my sweet tooth?” Jay asks

Willow holds the jar out to Jay. “I bartered something I have plenty of. Now, don’t you want to try it?”