Bears in Bondage Book I & II(MM)

Cole’s college days might be behind him if he can’t find a new job to help cover expenses. Times are rough in the city and jobs just aren’t readily available. If he moves, he has to drop out for now and that isn’t an option. Depressed, his friends take him out for the night to lift his spirits at the new gay bar, wanting to check out their drag show. They inadvertently arrive on leather night instead.

Bears in Bondage Book I & II(MM)

More From Bears in Bondage

Bastian nodded, his lust-filled gaze bearing down on Cole. “Oh, I have a feeling it’s right around the corner for you.”

“Oh and how do you know that?” Cole asked with a grin.

“You just met me, so that proves your luck has changed,” Bastian said with a smug smile.

“Here I was thinking you seemed like a nice guy and you throw out a tired, used line?” Cole said on a laugh.

Bastian grimaced. “Was it really that old and used?”

Bastian roared with laughter and spun Cole around on the dance floor. He then pulled Cole even closer. “I do so enjoy a man who can make me laugh.”

Cole grinned up at the attractive man and took in his features now that he’d spun himself into the light. The eyes Cole had assumed were brown now appeared to be hazel, or perhaps even green. Thin laugh lines etched outwards from the corners and gave Bastian’s face character. There was a hint of gray at the man’s temples; his thick hair and full beard were a deep brown, but the light seemed to catch a hint of red in there as well. It was impossible to tell with the dim lights and spotlights, but with what Cole could see, Bastian was a very, very handsome guy.

His muscular arms held Cole tightly. Cole felt like he fit perfectly in the man’s embrace. The next few minutes were quiet as they danced and looked into one another’s eyes. There seemed no need to fill the air with words; their gazes did all the talking.

Bastian licked his full lips as he lowered his gaze to Cole’s mouth. Cole felt the man’s cock jerk against him, his arousal for Cole more than obvious. Cole wanted Bastian to lean down and kiss him, right there on the dance floor. Cole wasn’t a fan of PDAs but caught up in the moment, he yearned to be marked and claimed by the bear of a man. The music stopped and changed into one with a faster beat, but Bastian continued to slowly sway with Cole in his arms. Cole didn’t mind. He was transfixed by the enormous charisma of the man. When Bastian finally leaned in to kiss him, he immediately surrendered to him and let him control the embrace. Cole felt the man’s tongue tentatively sweep into his mouth, and he ran his own along it, enticing Bastian to do more.

They began a war of tongues, right there in the midst of a crowd of dancers. Cole didn’t see them, hear them. He could only hear the beat of his own heart and feel the decadent warmth of Bastian’s mouth on his.

Visions of Bastian in leather, with Cole over his knee, came into Cole’s mind. He could see Bastian spanking him hard before fucking him just as roughly. 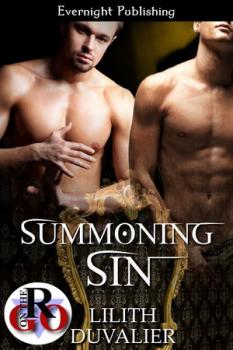