Samantha Tyler — Sam to her friends and on her byline in Behind Doors magazine — has been sent to interview Professor Sebastian Rutherford at the University of Oxford. The professor, the developer of horaric mathematics, a means of making predictions, has recently won the coveted Jamieson medal. Sam expects to meet a crusty old professor in tweeds, but Seb Rutherford is a blond, ripped genius determined to give her a satisfying interview by showing her the beauty of figures, including every one of her favorite numbers. Best. Interview. Ever. 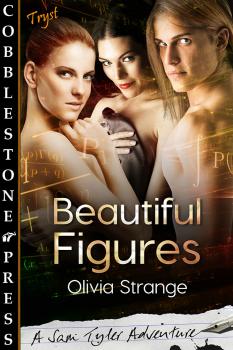 More From A Sam Tyler Adventure 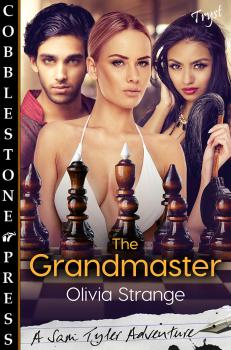 The Grandmaster
Olivia Strange
In Shelf
$3.99 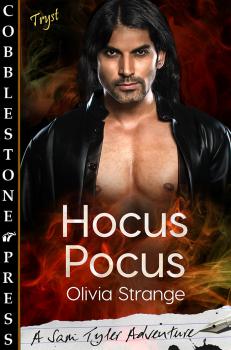 Samantha was excited. As excited as she ever got when she had something hard between her legs. The hardness felt good and made her all too aware of the moisture dampening her crotch.

She smiled to herself as she rode on, enjoying the stimulating bounce transmitted to her nether regions as she cycled over the ancient cobblestone streets.

In Oxford, the City of Dreaming Spires.

Samantha was excited to have come here on her latest assignment for her magazine Behind Doors.

“You did a great job on Carlos Tavares last week,” her boss, Karen, the features editor, had told her in response to the article she’d written about the tennis professional.

You bet I did.

Although Samantha had to admit that Net & Ballgames bore little resemblance to the balls and fishnets she and the well-hung Portuguese sportsman had actually gotten down to after they had disposed of interview formalities and finally shed their clothes.

“This interview is at the other end of the spectrum, Sam,” Karen had said before sending her here. “I want you to do a feature on an academic at the University of Oxford. A Professor Sebastian Rutherford, who’s just won the Jamieson Medal for Innovation in Mathematics. He’s a fellow at Penningfield College and is supposed to be some sort of Einstein. They call him the Math-a-Magician.”

“Think of it as a challenge, Sam.” Karen grinned mischievously. “I’ve made the usual arrangements but would prefer a well-rounded approach, so you can claim travel and food expenses. Go to Oxford and spend the day soaking up the atmosphere of the academic scene, then meet the professor at Penningfield College at three o’clock.”

The ‘usual’ arrangements Karen had made meant she didn’t want Samantha to research the man via the Internet, because she liked her reporters to go in blind to avoid preconceptions and to allow the interview to unfurl naturally.

Behind Doors was the market leader in quirky features on successful men and women from all walks of life, and Samantha Tyler — Sam to her friends and on her byline — was the magazine’s star reporter. Karen had mentored Sam when she’d first joined the team straight out of journalism school and had allowed her to blossom as a feature writer once Samantha had proven she had a the unique way of getting her subjects to reveal everything about themselves.

“I don’t know how you do it,” the feature editor once joked, “but if it didn’t sound too risqué, I’d call your column Pillow Talk.”

Samantha had smiled demurely and blushed.

You don’t know how close you are to the truth.

“Sorry, Sam. I didn’t mean to embarrass you,” the woman said with a smile. “Just keep doing whatever you’re doing and continue to write those in-depth pieces our readers love.”

I will whenever I get the chance.

Samantha smiled now as she bumped over the cobblestones, recalling how good sucking and drooling over Carlos Tavares’s balls had been before he’d ripped a hole in her fishnet tights and driven his throbbing cock deep into her oh-so-ready pussy.

Doubt if I’ll get much of that with a crusty old mathematics professor.

Even so, Sam had decided to take Karen’s advice and immerse herself in Oxford’s culture. The bright June day was gloriously sunny, and upon arriving in the ancient university city she had rented this bicycle, the traditional mode of transport for students, dons, and college fellows.

Cycling along the old cobbled streets from college to college, she dismounted often to check out some of the oldest of the city’s thirty-eight institutions, the earliest being Balliol College.

“Founded in 1263,” the guide said as he led her and a mixed group of camera-happy Japanese and Norwegian visitors around the college’s front quadrangle. “We’ve had five Nobel prize-winners here, plus three prime ministers — and at least four spies.”

He winked at them after adding the last piece of information.

“I don’t see as many students around as I expected,” Sam commented.

He smiled and nodded. “That’s because they’re busy preparing for their end of year examinations, miss. We have three terms here at Oxford: Michaelmas, Hilary, and Trinity. We’re at the end of Trinity, and all of the partying and fun has ended until after finals.”

Satisfied with his explanation, she continued to explore the colleges with their honey-colored stone walls and intricate, sometimes even medieval, architecture. At times, she stopped and pulled her Dictaphone from the back pocket of her skinny jeans so she could record notes to give her article more genuine background color.

She then cycled along the river, where students and visitors alike punted and rowed with varying degrees of skill. Handling a punt clearly took a certain amount of proficiency and also appeared to be something of a chick-magnet, for it involved standing on a flat platform at the end of a barge and propelling the vessel forward with a long pole. Several of the guys were extremely well ripped, and their punting actions caused muscles to ripple under their jeans and T-shirts, much to the appreciation of their female passengers — and Sam, as well, as she observed them from the riverbank.

One guy in particular, a student of about twenty, stirred her imagination. She pictured herself inside his punt in place of his girlish passenger and fancied him punting the vessel beneath the overhanging willows that grew along the riverbank so he could moor it in seclusion. She then kissed and caressed his ripped young body, and they made love in the shadows while other punters floated by.

Sam herself drew a fair amount of attention as she cycled through the city, and she received several wolf whistles along the way. She looked good because she took excellent care of herself, working out three times a week, practicing yoga, eating healthy foods, and dressing to show off her natural attributes to good advantage. She was a natural redhead, and had the personality to match. She could be either quick tempered or passionate.