Before Deadline: A Sagebridge Story (MF)

Margo Hemsworth, a small-town reporter, finds herself covering a murder investigation, the first in 20 years in the town. Through following the story, Margo is thrust into a difficult situation as her father, James, is preparing to represent Kinser Alvin, the lone suspect.

Kinser, a long-time troublemaker, and all around bad boy, has just returned to Sagebridge after several run-ins with the law. After making his home with his aging mother, he is now wanted for murder.

When Margo’s need for sex without attachments comes around to bite her in the backside, there is only one person left to pick up the pieces, and another with murder on his mind.

Will Margo be his victim or will someone come to save her from the clutches of death before it’s too late? 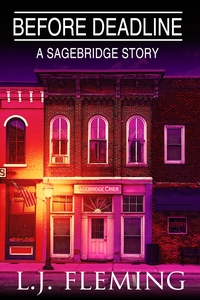 Before Deadline: A Sagebridge Story (MF)

Kinser pushed her smaller frame against the wall in the hallway, pressing firmly with his hips, pinning her. She gasped as the air escaped her body. This was the moment he dreamed about since he met Margo in middle school and now he was getting his chance.

Damn her ass is fine, he thought grinding his engorged cock against it. He braced his hands on the wall and pushed against her harder, moving in rhythm. Kinser longed for her to know how much he wanted her all those lonely nights he spent away from home

She moaned. It was an amazing sound coming from her, and he wanted to hear more. He wanted her to scream his name. He had to hear it. He needed it. Something inside begged for her gasps of passion. Maybe it was all the time he pictured her gasping for him in his dreams, but he knew it was the most amazing sound.

Kinser pulled away from her and pushed his hand past the front waistband of her jeans, not bothering with the button. His fingers searched past her delicate lace panties and slipped against her clit. She gasped, and Kinser smiled against her neck.

Still, it wasn’t what he needed to hear.

With skill, he teased her, first rubbing above her clit and then touching it with a firm pressure. Kinser then used a lighter touch, keeping her guessing what he was doing next. Margo squirmed, and her head lolled back against his shoulder as she gasped for air. He wondered how long it had been for her, or maybe Kinser was just that good.

“We can’t,” she begged breathlessly, and he didn’t relent. Kinser wouldn’t stop now. He wanted her, and there was a deep need inside of him for her.

“We are alone,” he reassured and increased the speed of his strokes. Kinser felt her nub hardening from his touch.

“You’re a dirty girl, aren’t you?” he growled in her ear. She nodded, unable to respond.

Our Hearts (MF)
L.J. Fleming
In Shelf
$0.00
Tweets by
sirenbookstrand