After his mother dies, Beggar Charlie finds himself alone, begging for bread. Life doesn't get any better when he is press-ganged. His only hope is the captain of the merchant ship who takes a liking to him.

When the ship docks in China, Charlie is sent ashore with Hickory Dick, a boy he mistrusts. A rebellion foments, and in horror, Charlie watches as the merchant ship sinks when some Chinese men set it on fire. Whatever will Beggar Charlie and Hickory Dick do? 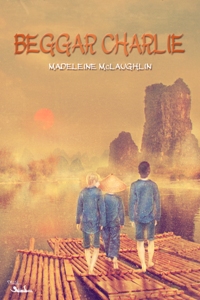 “Well, lad. I know you would like to be on land. I’ll send Master Richard with you for a little leave. Now don’t go far, will you? I’m sure you’d like to get off for a little while especially after all this tossing.”

I just know he can see how happiness comes to me. His pale eyes sparkle like the wine he pours for himself every evening. Land! I can touch my foot on the ground—even Chinese soil is good. I’m not too fond of Hickory Dick, or Master Richard, as the captain calls him, but it’s true that I need an escort. Even one as mean as Hickory Dick.

“Has he ever been to China?” The words jump from my mouth.

“No, but you know he was in the New World. He was at Montreal and he traveled down to America where he dealt with Indians and all he met there. That’s why the men call him Hickory Dick, after the trees he used to cut down. He’s only fifteen but he’s been in a couple of fights in that part of the world when there were troubles between the whites and Indians. I think he will know how to deal with the Orientals. He always says he wants to make a life on the sea, so he has to learn some time.

“Aye, Master Charles. I say he’s near to a man but still the second youngest to you. I think you should find commonality with him.”