Jet Ryan’s haunted by the memory of one night in the arms of a sexy tattoo artist who pushed all the right buttons before she shoved him out of her life. No one else seems to measure up. He needs her out of his system or in his life, preferably the latter. But, he’ll settle for one more night with her or a reasonable facsimile as long as he can touch her again. Ink Monroe avoids expectations that might get her hopes up, doesn’t believe in endless possibilities, and has absolutely no room in her life for a guy who wants to take care of her. But damn, it would be nice to have all those things for a little while. So when a customer gives her a business card for a woman named Madame Eve, she asks for a man to solidify the hazy memory of a single night of passion followed by the best night of sleep she’d had in years. Both have tall orders for a single evening of passion, but one night can lead to endless possibilities. Madame Eve promised. 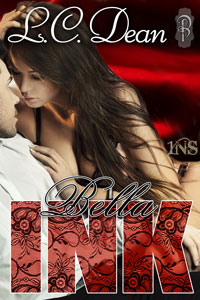 “Hello?” She looked around but there didn’t seem to be anyone inside. A breeze filtered through the screen leading to a spectacular view. She opened it and stepped out, breathing deeply of the pine-scented air.

Then she saw him. A long, lean cowboy type stretched out in a cushioned chair, boots propped on the railing. Sleep softened what would otherwise be a rugged face. Wheat-colored hair fell over his forehead and brushed his shoulders. Gold-tipped lashes hid his eyes. Unable to resist studying him as she had his truck, she moved closer, eager to see what kind of date Madame Eve had sent.

A crisp white button-up, opened slightly at the throat, covered his broad, thick chest and disappeared beneath snug jeans. His narrow hips contrasted sharply with the width of his shoulders, and long legs seemed to go on forever. His boots had been polished to a fine sheen, but they bore the signs of wear. Everything about him looked solid, reliable…safe. A shiver ran through her. What would it be like to awaken in his strong arms, pillowed on a chest made hard by work? The thought tantalized with the impossible. To be as well-cared for as his boots or his vehicle, to be appreciated scars and all, it would be a fantasy beyond even Madame Eve’s talent.

Still, she wanted it. For at least one night she wanted to be worthy of such tender care.

She hadn’t bothered to read his profile. The 1Night Stand service had sent it to her, but she didn’t want to know. She’d asked them not to send hers, but she had no idea if they’d done so. Expectations led to disappointment and could distort appreciation of reality. Though she doubted the gorgeous male stretched across the lounger was anything but what he seemed—deliciously sexy and rock steady.

Being with the Brothers Next Door (MFM)
Jenika Snow
In Shelf
$3.99