Belonging to a Highlander (MF)

Hugh McCross wants nothing more than to retire from the life of a mercenary. He has carefully crossed out his remaining debts, staining his hands red in the process and his heart a shade blacker with every battle. Yet, one last due stands to be repaid. All he has to do is take an innocent lass from the safety of an abbey and use her to subjugate her father's keep and lands. It will be a simple thing.

Or so he believes.

Catriona McBruiey thinks nothing of becoming an imposter the night she jumps at the chance to save a friend from a terrible fate. Kept pure in Atholl since she was of a young age, but with no forthcoming betrothed, what has she to lose?

Everything, as it turns out. But she does gain one handsome, devilish highlander in the process. 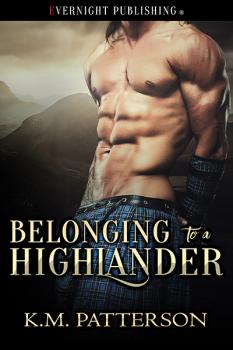 Belonging to a Highlander (MF)

Hugh McCross sat atop his warhorse in silence. He watched the men standing sentry behind the parapets of McLaren's keep. Unwavering gazes and stormy expressions peered down on Hugh and his men, yet something else glimmered in the eyes of the other highlanders.

Hatred? A sense of betrayal at his presence?

Hugh sighed and shifted in the saddle. He liked being on this side of McLaren's walls even less than the men standing atop the high, stone ramparts liked staring down on him and the contingent of Highland warriors at his back.

A small screech ruptured the cold, blustering Highland winds of the late-winter morn. The strangled sound stung Hugh's ears. He chuckled at the peal of resentment and turned to Alaric, his second, as the man hoisted the young woman in front of him. He pushed her through the front line of his men all the way to Hugh's side.

Alaric's scowl said everything, and Hugh grunted in humor, his lip curled upward under his dark beard as his stare drifted to McLaren's daughter. The lass had been his most troublesome captive for the past month, traversing halfway across Scotland with him and his men, the abbey he had stolen her from far behind them now.

The wind whipped the lass's golden-brown hair around her small frame. The loose strands lashed in havoc with each wintery gust, and the look about her twisted something in Hugh's chest. The painful urge that her gentle, silent image evoked coiled something in the region of his heart. Though, in a moment like this, he certainly questioned if he possessed such a thing at all. Years of war had hardened his heart, he supposed.

"Och." The light sound of regret spilled from his lips. Hugh shook his head. "Damn you, McAlison."

The eyes of McLaren's daughter danced with something other than impertinence when she met his stare this time, a thing she had never been afraid to do. She jutted her chin at him and, he thought himself deaf for a moment, but she laughed. A lass did not laugh in this situation, unless she were addled. Having dealt with this one aplenty, he knew she certainly was not addled.

She was crafty and conniving, this wee hellcat.

A lengthy month had passed since he had stolen her away from the nunnery in Atholl, stretched longer because of his stay with his friend and distant cousin Gabhran McBray. Indeed, this meeting with McLaren was terribly overdue. Perhaps he had stayed overlong with Gabhran simply to ignore this duty, this last debt to be paid.

And his part in this lass's and her clan's future.

Alas, he wished beyond measure to see the errand done with so he could return to his own home and at last lay to rest his days as a mercenary—and strike out the one, last standing debt he owed.

Hugh grimaced at the thought of McAlison as he lifted himself and swung down from the saddle to take the lass in hand. His fingers curled around her small arm and dug a little deeper than warranted, enough to elicit a hiss of aggravation from the she-demon. His lips twitched upward at the corner, and Hugh started toward the wall for the lass's father to have a better look at her. His powerful, merciless stride caused the woman to trip and stumble in the snow. Her delicate grumbling lifted the corner of his mouth under his beard.

Hugh jerked Tamsin McLaren in front of him and looked up at her father with the complete confidence of a man about to win a long-standing battle. The laird could have the wee hellion back and good riddance. He might feel a twinge of pity for her, but this was nothing compared to the hell she had given him since Atholl. If McAlison wished to wreak vengeance upon Laird McLaren, having the man's daughter returned to him was surely the way, for the lass caused more mischief than he had prepared for.

"Open your gates and surrender, McLaren. I have your daughter here and if you wish her back withoot harm, you'll be giving McAlison what he wants," Hugh yelled up at the man standing above him.

McLaren's gaze swept over Hugh and the woman as he pulled his deep-red cape tight about his shoulders. The man's dark eyes bored into them without emotion.

Silence curled around them, thick and heady, as the emptiness snaked past Hugh and his captive. The void wound through the camp of Hugh's men. Horses and men alike stirred at the eeriness the silence provoked.

Then, after several long moments passed, McLaren tossed back his head, the deep laughter of the laird and his men raining down on Hugh and all those at his back.

Hugh stood motionless, watching them, a tremor of anger twitching in his cheek.

"What in all the hell?" Alaric growled behind Hugh's back. "What trickery is this now?" he asked, stalking forward to Hugh's side.

Hugh glanced back to see his second's eyes boring into the back of the lass's head. Alaric stood just behind the McLaren's daughter, at her shoulder, and looked poised to pluck her up and shake her at any moment. The burly highlander's hands were clenching and unclenching.

"Indeed," Hugh said through his teeth, though only the woman before him heard as he growled against her ear and gave her a shake. "What is the meaning of this?" he whispered, his voice harsh. "Is this more of your mischief, lass?"

She turned her head to look at him over her shoulder and lifted a brow. "Oh, I'll no tell you, Hugh. Telling you would spoil all the fun."

Hugh growled at her before turning his attention back upward, to the men still laughing at him. "What is the meaning of this, McLaren? How can you laugh when I'm holding your verra daughter before you so?"

The men hooted and laughed even more.

His veins thumped madly. Hugh clamped his hands into fists until he could stand no more. "I'll have an answer," Hugh shouted, the baritone of his brogue rumbled over the walls and carried the deadly threat of his anger.

All went quiet at the booming sound of his voice, and McLaren's humor faded. The man wiped the back of his cuff across his dark beard and his stare landed on the woman trapped in Hugh's hands. McLaren leaned over the parapet, bracing his arms on the wall.

"Och, I would give a mite of concern," he said, and then paused as he looked the woman from head to foot. "That is, if the lass were my daughter." His chest shook with barely contained humor. "But seeing that she's no…" He looked to his men and their laughter rose. "McCross, someone has played you for a fool. Lass—" The laird turned his attention to the woman, "Whoever you are, truly, 'tis a debt I owe you."

"Damn you," Hugh said as he whipped her about to stare down on her. He held her tightly to him in his ineffable fury, savagely searching her gaze for the truth, but alas, he only found humor there in her striking blue eyes.

The corner of her lips quirked upward, and she tilted her chin at him as she had done countless times over the last month on their sparse meetings in her tent, when he had gone to assure himself she was indeed still there.

A tightness clamped around Hugh's gut as he continued to search for an explanation. He raked his gaze angrily over her, a feeling of incredulousness that this could be happening washed through him like a flood.

Then realization hit him.

Why had he not seen it before? His eyes stilled on her hair. This lass was not the daughter of any McLaren. Her hair was a bonny shade of brown with gold and red streaked through, as though she had spent day after day outside under the warm sun. Even fools knew McLarens by their fair skin and dark hair.

Hugh cursed himself and pulled the woman around, handing her off to Alaric.

"How did you find yourself serving at the hand of McAlison?" McLaren asked.

Hugh's eyes traveled up the stone wall, his stare cut at the man. He glared as he gathered his hands before himself, his fingers laced together to keep from reaching back to strangle the lass Alaric held.

"A debt owed," Hugh called up.

McLaren slowly nodded once, all traces of humor gone. "A debt," he said. "Be wary of those. I, too, once owed McAlison a debt." His voice fell to a disparaging tone. "I regret that obligation to this day, for being beholden to McAlison claimed two sons and now I learn from you that my daughter is in danger as weel." With a pained look, McLaren started to turn his back on Hugh, but stopped. His eyes filled with a burning hate. "McCross, my son has likely paid the ultimate price for his sins. You ken McAlison has taken him prisoner." He paused on a wave of emotion and looked out over his lands before he reined in his apparent fury. "My son and heir is likely dead."

The man sniffed back what Hugh thought might be tears before locking his stare with Hugh's. "You'll no take my daughter from me, too. Tamsin shall no pay for her brother's crime, though you and I verra weel ken there was no crime at all. So, you can freeze to death out here, but I'll no be letting you inside my keep so long as you are under orders from McAlison. No for the sake of her—" he lifted a finger to Hugh's captive, "no for anyone. McAlison will no be winning this round, and if I were you, I would find another to fight for despite any debt."