Sergeant Jerry Stanton is a young soldier serving in the War in Iraq. He is a gunner on a gun truck nicknamed “Lucky Bear,” one of those tireless workhorses that escort supply convoys from camps in Kuwait to destinations scattered throughout the war-torn country. In the early morning hours before a scheduled mission, a dust storm howls across his camp and threatens to bring convoy operations to a halt. Worse, the camp receives word that a gunner from his company was killed by an IED while on a convoy mission in Iraq. Unlike most soldiers, Jerry doesn’t carry a lucky charm, but upon receiving news of the death of the gunner, he begins to mull over the merit of a good luck charm—only, what would work for him? Perhaps mail call will provide the answer. 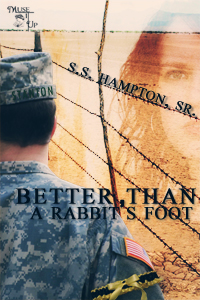 Sergeant Jerry Stanton, an M4 Carbine slung across his chest, glanced at the dark form that trudged alongside him in the hot early morning darkness. It was all the darker for the dust storm that howled across the small camp, a dusty and sandy convoy support center, CSC, a mile south of the Iraqi border. He placed his hand over the tall styrofoam coffee cup from the messhall that was open at all hours to serve those about to head out on a mission. He felt the itchy dust filtering down his back, along his arms, and coating his fingers.

In spite of his short time deployed to Kuwait, he had learned that dust storms were worse than sand storms; they were hot and itchy while the sand storms stung exposed skin and chilled the air. Breakfast was good but tasted flat, more due to the question of whether their mission would be a go or no-go because of the storm that roared out of the midnight darkness hours before.

“People like a happy ending,” the soldier repeated. He was a gunner from another gun truck as the squat, venerable M1114 HMMWVs, which were never meant to be combat vehicles, were called.