Better Than Her (FF)

Sydney Shieh is pitching at top form for the Central High Seabirds, but isn’t good enough. No matter how hard Sydney works, Rebecca Howard, star pitcher for the Seacrest High Jaguars, does better and looks effortless in the process. Sydney swears to take Rebecca down or learn her secrets.

Rebecca plays softball for fun, not competition. She doesn't believe in obsessive practice or softball camps or worrying too much about what other people think of her. But she keeps rising to Sydney's challenges. 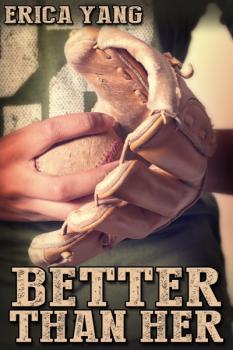 Better Than Her (FF)

"Jeez," Sydney said. "Must be nice to have people begging you to take their softball camp scholarships."

Rebecca didn't have time for this competition Sydney thought they were in. She just wanted to get out of there as soon as possible. "Must be nice to be able to buy your way in whether you've got the talent or not," she shot back. As soon as the words came out of her mouth, she regretted them. She hadn't intended to be that mean -- she'd just been nervous. Sydney flinched, and her eyes flashed, and Rebecca sort of wanted to apologize but couldn't figure out how to do that without explaining why she'd been on edge in the first place.

"You don't think I have the talent," Sydney said slowly.

Rebecca tried to backpedal. "That's not what I meant."

"Yeah? Then what did you mean?"

"Sure." Sydney stepped closer, using her height to loom. Rebecca didn't think she was afraid of her, but her body shivered as if it hadn't gotten the memo. She shoved her hands behind her back and hoped Sydney wouldn't notice they were trembling. "I'll make you a promise, Rebecca Howard. I'm going to defeat you. I'm going to out-pitch you in what ought to be your moment of glory, and leave you feeling humiliated when you wish you were celebrating."

"Why? Because that day you pitched the no-hitter, you were only competing against yourself, not with me? I was there, and you can't pretend I wasn't. I'm going to show you how it felt."

"Fine. Whatever. I'll see you next season."

"Yeah, what's wrong with that?" Rebecca tried not to show how much effort it was taking for her to stand her ground. She wasn't used to being easily intimidated. She'd faced down bigger girls before. For some reason, though, standing this close to Sydney made her want to start running and never look back.

"I'm not." It was true -- or it ought to have been, anyway -- but the words came out with an unmistakable quaver.

That sound was like blood in the water. Sydney responded to it with a shark's grin. "You want to wait until next year before you face me again because you want to ride that no-hitter for as long as possible. You want to hold that over me and act like it settles things between us."

"There's nothing between us!" Rebecca protested, but she knew that was a lie even as she said it. She could hear her pulse in her ears. Sydney's presence pissed her off like nothing else in the world. She hated the version of herself that Sydney seemed to see -- she wasn't this arrogant, swaggering, insecure girl who was afraid of being unseated from her fragile throne. She didn't know what to call whatever was between them -- she wasn't looking to be in a rivalry -- but, whether she liked it or not, they seemed to be connected in some way.

Sydney must have known that, too, because she didn't bother arguing -- she only smirked. "Scared to death," she said.

"I really don't care if you beat me," Rebecca said. "You could do it tomorrow, and it wouldn't change anything."

"Because deep down you'd still be better than me."

Rebecca could feel Sydney's breath hitting her face. Given the bitterness of her words, it smelled surprisingly sweet. She stood close enough that Rebecca could also pick up the unembellished scent of her soap and shampoo and the slight muskiness of her skin underneath. Her head spun.

"This doesn't have anything to do with you," Rebecca said weakly. "I missed the deadline. I wasn't going to sign up for camp."

Sydney's opinion shouldn't matter, either. It bothered Rebecca that it did. Still, even as she opened her mouth to say no, she knew that what would actually come out would be yes.

She didn't like how weak and thrown off she felt, so she dug into the ground like she did before a pitch, rooting herself in the force of the energy she could store in her knees, ankles, and hips. Braced against the earth this way, Rebecca always felt as if she could fly if she had to.

"I'll be at your camp," Rebecca promised Sydney. "And you'll try to defeat me or humiliate me or whatever you say you're going to do, but you're right about one thing. I don't think you can."