Norah Hawkins wants a new life as far from her old one as possible, but where can she ever find that chance? When a letter arrives promising her the deed to property in San Francisco, Norah packs her bags and flees the broken shards of her troubled past. With its anything-goes atmosphere, 1906 San Francisco suits Irishman Gerard MacKenzie just fine. He loves tending bar in Norah’s saloon, and verbally sparring with the shrewd businesswoman for more privileges and work. Her beauty, wit and sass make his blood boil with need. But disaster looms over their promising new lives when a terrible earthquake buries their dreams and threatens to shatter their future. Norah and Mac must rebuild their lives from the ruins and they’ll need each other more than ever, but can their ties to each other save them or tear them apart? 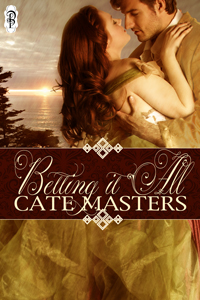 Guilt filled her as she sealed the envelope. Her first letter should have been to her mother. Estelle probably forgot I left. More likely, she bought a bottle and forgot everything, period.

Downstairs in the hotel lobby, Mac stepped around the corner into her path. “A letter to your beau?”

Leering, he nodded. “Ah. You left him behind.”

“Certainly not.” My, but he cleaned up nicely. The electric wall sconce gave his black hair a sheen like raven’s feathers in the sun. His smooth-shaved skin accentuated the whites of his eyes, rimmed with thick dark lashes. Curled in a teasing smile, his lips appeared soft, not weather-worn like some men.

He cocked a brow. “He’s joining you later?”

“I don’t see how it’s any of your concern.” Unless he still hoped for employment. His long, smooth fingers might be handy for more than cards. Still, if she wanted music, she could buy a player piano and not have to pay it a weekly salary. Though it wouldn’t be nearly as nice to look at as Mac.

He shrugged. “It isn’t. Unless you run into debt playing poker. I want to be assured someone will back you up.”

“You needn’t worry. I never get in over my head.” In anything.

He tipped his cap. “Smart woman.”

Not enough to fool him. Last night, Norah had imitated her drunken mother to perfection, another skill that came in handy. Believing her vulnerable, the men made themselves moreso. Not Mac. He’d grown more careful, as if he guessed at her intent.

“What are you doing here?” She wondered what sort of a racket he ran. Everyone had one. Uppity ladies in their lace-edged gowns and mansions excelled at scamming men into marriage, but only succeeded in trapping themselves in the bargain. She preferred a prison with bars.

Coincidence? Or had he followed her? “I’m curious. Do you possess other skills?”

Smiling, he tugged at his jacket lapels. “I’m a man of many talents. Why do you ask?”

Lo, his ego reared again. “Have you no real trade to ply?”

“Playing the piano is a ‘real’ trade, Miss Hawkins. However, I can work at almost anything, from carpenter to barkeep.”

He grimaced. “You disapprove?”

“Not at all. Those are honorable trades.” Why should she feel relieved?

“As honorable as your own?”

The Subject Was Rose (MMF)
Karen Mercury
In Shelf
$5.99
Tweets by
sirenbookstrand