The club owner, Master Turner Pike, and his friend Master Barry Winston are the most dominant, handsome, masculine men Charlie has ever encountered. Unbeknownst to her, Charlie is a natural submissive and the two men pick up on those personality characteristics right away. They want to explore a relationship with the sexy, voluptuous little sub.

Just when things seem to be looking up for the three and their relationship is heading in a positive direction, danger is lurking in the shadows. Malevolence comes calling to Charlie’s doorstep, and it’s a race against time for the two Doms to save her.

Will they get to her in time?

Turner knew that the other men were going to be intrigued by her. Charlene was a paradox. One minute she was feisty and the next sweet and innocent, and as far as Turner could see it wasn’t an act. He couldn’t wait to unravel her layers and find out who the real woman was and what made her tick.

Charlene held up the skirt and then the corset and eyed them with wide eyes. She glanced toward him and then blushed when she caught him watching her. She was definitely shy. He wondered if she would have a problem displaying her body in public. From what he had seen earlier he thought she would, but he’d also seen the pulse beating hard and fast at the base of her throat. Even though she had been nervous and a little intimidated by him and Barry, she had also been very aroused. Turner decided to push her a little more.

“And, Charlene, as my submissive, you aren’t to wear panties or a bra.”

Charlene’s shocked little gasp amused him greatly. After a moment of silence, she finally lowered the outfit and let it dangle from one hand as she looked at him and then Barry. “Fine, I’ll wear your stupid outfit.”

Turner bit his tongue to hide his smile. Her statement had been said with resignation, but there was a definite sparkle in her eyes. It looked like their little sub was excited about wearing such different clothes. He wondered why she tried to hide such a beautiful curvy body. When he and Barry were closer to her, he intended to take her shopping. There would be no shapeless shirts or slacks for her. No, he would make sure she had feminine things that showcased her stunning voluptuous figure. He glanced toward his friend and saw the glimmer of humor in his eyes, too. They were always attuned to each other, so he knew that Barry had caught on to the excitement she had shown. Showing her how sexy she was and how much gratification they could give her was going to be a pleasure.

Charlene turned away from them and walked toward the double doors leading to the hallway. Barry gave him a wink as Turner turned to follow her. He moved around her quickly and opened the doors for her and then gestured for her to precede him. Biting back another smile at her harrumph, he walked at her side until they were at the entrance.

Turner took her hand in his and held it much longer than necessary and watched as goose bumps raced up her arm. Oh yes, little sub, you are definitely feeling the attraction. I can’t wait to tap into all the passion and set it free.

“It was nice meeting you, Charlene. Drive carefully and we’ll see you tomorrow night.” Turner opened the door.

Charlene snatched her hand from his, gave him one more glare, and hurried down the steps to her car. As she got into the driver’s seat and drove away, she gave him surreptitious glances.

He went back inside to speak with Barry. They had some planning to do, and although they would have to take care not to push little Charlene Seward too far, push her they would.

Barry was waiting for him and gave him a smile. “She could be the one, couldn’t she?”

“You know she’s going to fight us every step of the way.” Barry’s smile widened.

“Yes, I think she’ll lead us on a merry chase.” Turner smiled, too. “Little Miss Charlene doesn’t even know how submissive she is.”

“Yeah, I got that. We’ve planted the seed though. Want to place a wager that she comes in here tomorrow tired after a sleepless night?”

“You know I don’t gamble, Barry. Besides, that’s a no-brainer. I don’t place bets when I know the outcome.”

“Man, I’m as hard as steel right now,” Barry groaned and shifted on his seat. “I don’t know how I’m gonna get through tonight without her here. God, some of the subs who attend the club are so damn needy, they’re more like slaves. Not that there is anything wrong with that, but that’s not what I’m looking for. I just wish they didn’t come after you and me so much. I’m getting sick of being alone though, Turner. We need to convince Charlie we are what she needs.”

“I agree with you, Barry. I like her nickname and nearly slipped up by calling her that a few times, but I just couldn’t help myself when she practically demanded we call her by it.”

“Shit, it is going to be a long thirty-odd hours.”

“Yes it is, my friend. But as the saying goes, ‘patience is a virtue.’”

“Yeah, but I don’t like her not being here where we can keep an eye on her. If she was here under our protection I could be as patient as a snail, but since she’s not I’m on damned pins.”

“As am I, Barry.” Turner sighed and slapped his friend on the shoulder. “Let’s get to work. If we keep ourselves occupied then the time will go faster.”

“Do you think we’ll be able to convince her to move in here? We can give her one of the spare rooms.”

“One step at a time, my friend.” Although Turner was spouting out aphorisms, he was just as eager as Barry. Turner was very easygoing and patient and Barry the eager beaver, but this time he was just as zealous as his friend. He tamped down his thoughts and headed toward his office. Tomorrow night would be upon them before they knew it.

Once Charlie began to relax, he removed the flogger from her back and then flicked his wrist. The slapping noise made Charlie jerk. Though she tugged against the restraints, Barry knew she hadn’t felt any pain, because his friend hadn’t put much force in the hit. With every flick, Turner added more strength until the flogger began to leave pink marks on their sub’s back. He worked his way down until he was flogging her ass. Until that moment, Charlie hadn’t made a sound other than her panting breaths, but now she began to moan as the strands of leather connected with her buttocks and she pushed her hips up into the blows.

Barry’s cock jerked and pulsed, and his balls ached. He wanted to walk up behind her, release his hard dick from his constricting jeans, and ram his penis into her hot, wet pussy with one shove. He adjusted his aching erection and glanced up to see Turner smiling at him. The urge to touch her was too much, so he moved around the cross until he was standing in front of her. Her face was flushed with desire, her lips were plump and swollen, her eyes closed, and tears were running down her face.

“Wait.” Barry held his hand up to stop Turner striking her again. “What’s wrong, baby? Is the pain too much?”

Using his hands, Barry wiped the moisture from her cheeks and then walked back over to the door, where Turner had dropped his equipment bag as they had entered the room. He grabbed a few tissues and the bottle of water sitting on the floor next to the bag. Barry walked back over to Charlie and held the tissues to her nose.

“Blow,” he ordered and was pleased when she obeyed without any hesitation. He then opened the bottle and held it to her lips, letting her quench her thirst. “Okay now?”

Barry tilted her face and brushed his lips over hers. She whimpered when he licked the line of her lips, and she opened to give him access. He kissed her hungrily, hoping to quench some of the fire running through his blood, but it only made his desire flame hotter. He kept his eyes open and watched Turner move to stand behind Charlie. With a deft flick of his wrist, he flipped the flogger over and caught the base of the dildo. Barry slowed and stopped the kiss, and after stroking a finger over her cheek, made his way around her to stand next to Turner. He was just in time to see his friend run the tip of the fake cock through her dew-coated slit and then over her distended clit.

“Good sub,” he said loud enough for her to hear. “You will learn that we control your pleasure, Charlie. Not you. We’ll give you what you need but only if you don’t try and take that power from us.”

“Please.” She spoke so softly that she almost whispered, desperation evident in her voice. “I need more.”

Turner mustn’t have been able to hold his desire back because he relented and rammed the dildo into her to the hilt. Charlie cried out and gasped as he pulled it back out again. With increasing speed, Turner shuttled that fake cock in and out of her pussy until she was keening and her body began to shake. The force of Turner’s thrusts looked almost violent, but not once did their woman’s cries sound as if she was in pain. She pushed her forehead into the cushioned St. Andrew’s Cross as she screamed with pleasure. Barry slid his gaze back to between her legs, where cream was dripping from her pussy as her vagina contracted and released around the rubber phallus. Her anus was pulsing, opening and closing, giving him and Turner a peek of her sexy rosette.

Barry sat down on the platform between her feet, so that he was facing Turner, and then bent down so he could scoot between her legs. He had trouble getting his shoulders in through the X of the cross, but he persisted and half turned until one shoulder was through. He was in the prime position for what he wanted. Her pussy was just below the middle of the X and accessible to him if he leaned forward slightly. Using his thumbs, he separated her labia, and opening his mouth over the top of her slit, he began licking and nibbling on her clit.

“She tastes nice and sweet, doesn’t she, Master Barry?”

“Listen to the little sounds our sub makes while we are pleasuring her.” Master Turner moved closer to him and their woman. “I can’t wait to make love to our sub. Would you like that, Charlene?”

“Oh God,” she cried when Barry sucked her clit into his mouth, suckling on the sensitive bundle of nerves gently but firmly.

Smack. “I asked you a question, sub. I expect an answer,” Turner stated coldly. 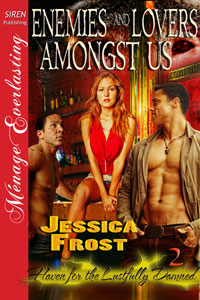 Enemies and Lovers Amongst Us (MFM)
Jessica Frost
In Shelf
$5.99