Louisiana Creole Gabriel Fortier comes of age ten years after the end of World War II under the influence of men who have returned from war with desires for other men that being a soldier in the trenches has developed in them. Gabriel has no barriers to being submissive to men, and when this gets him into trouble in rural Louisiana, he answers the call of former classmate, Adrian Ames, who had been his first limited experience with men, to join him in Lubbock, Texas. Gabriel’s bus ticket only gets him as far as Guthrie, Texas, though, shy of the Lubbock goal, where, to gather the onward travel funds he needs, he becomes a waiter and rent-boy in the local diner. He gets to Lubbock eventually, where he finds Adrian has gone on to Hollywood, and a calming interlude with rancher, Frank Doyle, and not-so-calming encounters with actors filming a Western epic in the area, lead Gabriel on to Hollywood himself and a reunion of sorts with Adrian. Somehow, this isn’t enough for Gabriel. He’s left something behind under the big sky of Texas that calls to him, telling him there is something of more value to him in life than drifting through it as a rent-boy. 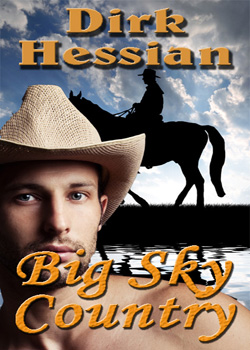 “Here we are,” the bus driver called out. He pulled the bus over in front of a gas station at the beginning of a one-main-street town, with just one line of houses on streets on either side of the one with storefronts on it.

“We’re where?” a woman near the front of the bus asked in a weary voice. “Didn’t we just stop for breakfast and a coffee less than an hour ago?”

“Me?” Gabe asked, turning his face to the front of the bus. He’d been daydreaming, reviewing his life up to this point and not finding that much to be impressed by. Good thing he was good looking and willing to lay down for a guy. A lot of guys had come back from the war with that itch. Adrian told him there were men in Lubbock who’d be willing to give him a start if he gave them something. By his reckoning they should be hitting Lubbock any time now.

“Yes, you. This is where you ticket takes you, son. You’re home.”

“Home?” Gabe said, looking around. This didn’t look like anyone’s home really—at least anyone not trapped here: two blocks of storefronts at a cross-road of two minor highways, with a row of houses all looking alike on either side and then nothing but flat semidesert land in all directions.

“Take a look at your ticket. My clipboard here says you bought a ticket to Guthrie.”

“I’m going to Lubbock,” Gabe said, scrounging around for his bus ticket. “Well, shit,” he then said. The ticket, indeed, was for Guthrie, Texas. He’d had a bit of a wrangle with the station master selling tickets back at the Lafayette Greyhound bus station. He’d tried to tell Gabe that the fare to Lubbock was more than Gabe saw marked on the sign. They’d argued for nearly a minute, with the line building behind Gabe, and the ticket seller had finally given up and issued a ticket. Gabe could understand now that the ticket seller hadn’t lost—he just gave Gabe a ticket for how far he thought the fare give would cover regardless of what the sign said.

“You can go to Lubbock for another fifteen dollars,” the bus driver said. “Lubbock is about eighty miles further west down this road. Or you can get out in Guthrie. Sorry, Them’s your choices.”

All Gabe had left was the ten dollars the guy had given him for sex the previous night back before Shreveport.

He stood by the side of the road, his duffle bag on the ground next to him, and coughed, as the bus covered him in a cloud of exhausted as it pulled back onto the road. He watched it drive through the business section of Guthrie, and he was still watching it over five minutes later, disappearing into the flat, arid ranch land of central northern Texas. Heaving his duffle on his back and holding its strap with a fist at his right shoulder, he turned and walked into Guthrie.