Bitten Peach is an eleven-story anthology capturing the essence of the deliciously euphemistic Oriental world of men making love to other men, arranged in a chronological sequence covering a 2,200-year period. These are stories that go beyond the random act of sexual release between men. They offer more complex and context-richer studies of gathering age-old themes, exotic settings, and all-so-human characters up into the Floating World of the Orient in which men give themselves to other men-some more freely than others-for something in return, whether it is for money, position, power, survival, honor, service, devotion-or, not all that rarely, really, in unconditional love. 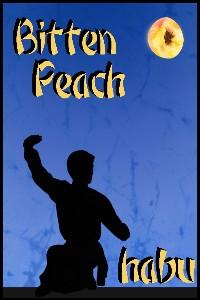 "
Bitten Peach is at once both a fascinating cross-cultural sensual experience and a guilty pleasure. Author habu draws on a rich and fascinating set of hidden traditions from China and Japan, offering a glimpse into a unique, forbidden world The eleven stories in this anthology portray a full range of human emotions, and some end much more happily than others. All are delightfully explicit, and all will satisfy on some level Each story is like a long-forgotten historical treasure, waiting to be uncovered." -Erin Schmidt, Rainbow Reviews

As they crouched, Li had to rub his eyes between looking three times to his right along the parallel path leading into the stone terrace. How could this possibly be, he asked himself. What was a brightly colored, undulating, long-tailed dragon doing up here near the summit of the Tien Tang Shan.

It was wending its way, slithering along with the motion of a ship upon a stormy sea, through the forest of pines, never seen in whole but in bits and pieces between the closely set trees of the pine copse. The dragon was snorting, and its undulating progress was what was being accompanied by the low drum beat and the playing of the flute. The dragon was twisting and turning and advancing upon the stone terrace in rhythm to the drum and flute.

And there was the beat of feet, many bare feet, and the humming of men-an almost human dragon. A sight to behold, one that Li thought no one from the valley below, in the markets of Kueilin, would believe should he live to tell of what he saw and heard.

And when the dragon entered into the stone terrace and made a quick turn to the right, up the path toward the summit of the Tien Tang Shan, Li realized what it was. Nothing more than one of the ceremonial dragons that wended the streets of Kueilin marking the Chinese New Year. A long, shiny-cloth costume, in brilliant yellows and blues and greens and white, slung over the bodies of many men, undulating around and twisting and turning through the streets of Kueilin, and, in this case, around the summit of the Tien Tang Shan, and now up, up, up toward the Yung Yuan Hsi Lo monastery that now, as the mists above them began to be burned off by the morning sun, Li could see what was perched at the very apex of the mountain. White marble columns rising from pavilion platforms to high-peaked roofs covered with fish-scale shaped golden tiles that gleamed in the bright sunshine there at the top of the world above the clouds separating the world of the monks from the common valley dwellers.

And there, suspended from chain links high above his head, his cheek pressed into a marble column at the edge of one of the pavilion platforms, the rich folds of the scarlet silk robe Li had given him lapping at his feet, hung Li's protg and erstwhile lover. Junjie-naked and magnificent of body against the pristine backing of the mountaintop temple.

Shocked at the sight of his shackled love, Li rose up onto his feet in the bed of ferns and opened his mouth to cry out to Junjie. He was stopped, however, by the tug on his sleeve by his servant, Zhong. Li remembered where he was and that it was death to be discovered there, and what he had started to call out to Junjie stuck in his throat and came out as no more than a low gurgle.

Those of the dancing dragon did not hear Li's cut-off exclamation or see him rise in the fern patch. They were turning their attention upward now, upward toward the new initiate, the handsome, desirable Junjie.

Li collapsed back down into the bed of ferns and watched, in frustration and horror, as the undulating dragon, powered by a myriad of beefy, well-muscled, naked thighs wound and wove its way up the last flight of stone stairs to the base of the Eternal Joy monastery platforms, weaving its way, like an inevitable wave toward the ripe youth chained to the monastery pillar.

Li let out a low, guttural moan as the dragon head reached Junjie and reared up, revealing the naked body of the lead monk under the dragon covering as he embraced the shackled Junjie from behind with one arm and wrapped the other around Junjie's belly, pulling Junjie's hips back in presentation to a hard, thick, ready cock.

Li nearly fainted back into Zhong's arms with a sob, as he helplessly watched the first thrusting entrance of the initiation ceremony by the lead monk under the dancing dragon pelt between the thrust-back, plump buttocks cheeks of Junjie, the one who Li had been cultivating and saving for himself.

She Loves Me: a Collection of Lesbian Erotica
Leigh Ellwood
In Shelf
$2.49
Tweets by
sirenbookstrand