Black and Blue and Pretty Dead Too

Paul Turner returns. In his first appearance since 2007, this gay Chicago detective and father of two sons gets caught in a tangle of intrigue and corruption. A brutal Chicago cop is found murdered at a gay leather festival. Turner, plus his police department partner, Buck Fenwick are assigned the case. Through a rising tide of danger, they need to find the truth among police corruption and cover ups. Some top cops and A-list leather queens are among those whose lies and fears drive the web of desperation and deceit that Turner and his partner must unravel. 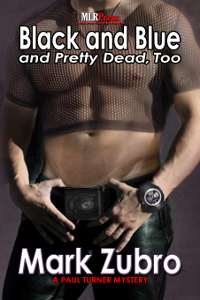 Black and Blue and Pretty Dead Too

Fenwick sweated. Summer in Chicago. Dampness formed sticky pools on the overweight detective's desk where he rested his forearms. Heavy, dark splotches under his armpits, patches of wet in the middle of his back aiming for the crack of his ass. The six-foot-high pole fan next to his desk thrummed on high speed, clanking and whirling as loudly as the semi-trailer trucks rumbling along on the Dan Ryan Expressway half-a-mile away. Secured to the floor nearby, two low-rise fans swiveled and gurgled. The combined blasts of air barely caused a ripple in the fountain of sweat that was Fenwick.

Buck Fenwick and Paul Turner had all their papers on their desks anchored from long familiarity with the lack of air-conditioning in Area Ten headquarters, scheduled for renovation sometime in the next decade. Nobody was holding their breath for work to start while crime still lasted in Chicago.

Fenwick flung his pencil onto his paperwork. He said, "I'm going to shoot the next person who commits a crime in Chicago."

Turner said, "If you could shoot them before they committed the crime, it would save us all a lot of hassle."

"I'd need a timetable," Fenwick said. He drummed his fingers two inches from one of the damp patches. "Or I could consult my personal goddess for inside information."

"You have your own one-man psychic network? I would hope you'd keep that to yourself."

"A dream come true. Although I'm curious about how that goddess shit works. Do people have to line up to chat with yours, or do they have to get their own?"

"She calls and I listen."

Turner said, "What if she calls while you're traveling eighty miles an hour on the interstate?"

"I never go eighty on an interstate."

Fenwick said, "That was Clark Street, and we were in a hurry."

"To get you to an air-conditioned diner."

"You have your kinds of emergencies. I have mine."

"Tell the goddess not to call me. I'm not picking up."

"Hell of a thing," Turner said. His cell phone rang.

Fenwick said, "If that's the goddess, tell her I'm busy."

Turner noted it was just before nine o'clock, pressed the button to answer, listened for a moment then said, "He's busy. Can I take a message?"

Fenwick smiled. He said, "One for you."

It was Ben, Paul's partner. Ben said, "Do I want to know what that was all about?"

"Fenwick's waiting for a call from his goddess."

"Again?" Ben asked. An in joke for Paul and Ben. They both loved the old Rocky and Bullwinkle shows.

"Brian has been drumming a basketball in the driveway since the beginning of time. I'm going to hear it in my dreams."

"He slathered on a million layers of sun block, level ten gazillion. He has several gallons of specially purified water that he guzzles at regular intervals." Their oldest son was a health nut and insisted on organic everything. Probably dribbling an organic basketball covered in sun block. Paul had told the boy if he could afford it, he could be as organic as he liked. "He's been packed and ready to go since dawn. Which I think is when the basketball dribbling actually started."

Paul repeated their parental mantra, "Better than drugs and alcohol."

Ben said, "Let's not vote on that until after he leaves."

A few moments silence ensued. Paul pictured Ben bringing the phone to Jeff. Paul knew exactly what their youngest son was doing, sitting in his wheelchair in his room in the middle of a horrendous mess. The boy could dither about packing with the best of them.

Paul interrupted. "You're not trying to pit one of us against the other?"

"Parents always agree on everything."

"Okay." With just a hint of the soon to be teenager's whine in his voice. Paul didn't comment on it. He didn't need to take a victory lap on his son's compliance.

"He always has been before. I asked him why there was always Chess Camp drama. That's when he wanted to talk to you."

"Mrs. Talucci will stop over whenever you get home."

"Excellent." Mrs. Talucci was their ninety-something next door neighbor. She was planning one of her exotic trips, this time to the Amazon.

Paul loved the low thrum of his partner's voice. He and Ben had been looking forward to the boys being gone; hot sexual escapades in a house to themselves. They exchanged endearments and hung up.

Fenwick said, "That wasn't the goddess. You lied."

Commander Drew Molton tapped the top of Fenwick's desk with a rolled up piece of paper. They hadn't heard him approach because of the noise from the fans.

Molton said, "I hate to interrupt, but the criminals of Chicago have struck this evening."

Molton said, "I think that's against regulations. I'll try to get the laws changed. Just for you. Meanwhile, the call came in. We've got a problem at the old Prairie Street train station."

Molton said, "Just go. And try not to sweat on the corpse."

"One of ours," Molton said.

Fenwick said, "But we aren't all rushing around madly rounding up the usual suspects? Solidarity forever and all that bullshit. What's the problem?"

Every cop in the city knew the story. Two months ago, Trent Belger had been in a bar with another cop, Barry Callaghan, his partner for eleven years in the department. Callaghan began beating the hell out of the female bartender. Belger had stepped in, put a stop to it. When uniformed cops, detectives, lieutenants, captains, and commanders showed up, Belger backed up the bartender's story. Video from a patron's cell phone confirmed Belger's and the bartender's version of events. Since that day Belger had been vilified throughout the department. For interfering. For turning on one of his own. For disloyalty. For breaking the blue code of silence. Didn't matter if logic and the recording proved the offending cop committed a felony.

Within hours of the event, even before reporters splashed the video all over the news, everything in Belger's locker in the Ninth District had been stolen or destroyed, his car keyed, his tires slashed.

Molton said, "I want a real investigation. Our guys are the obvious suspects. Be careful. Follow all the rules."

"This is going to be complex and maybe dangerous," Molton said.

"I think so," Fenwick said, "I just can't imagine someone trying to mess with us." He flexed the mounds of fat on his right arm. Turner knew that Fenwick's heft included a great deal of muscle and toughness.

Molton said, "They won't have the balls to confront you. It'll be sneaky and nasty. Behind your back. Be careful."

Molton added, "I'll send over pictures of Belger and Callaghan. That's the least you'll need. I'll try and think of any kind of paperwork that would help. I can tell you that neither one was scheduled to be on duty tonight. I'll have Barb put a packet of data together for you." He left.

His secretary, Barb Dams, was possibly the most efficient in the CPD.

When Molton was out of earshot, Fenwick said, "Fuck-a-doodle-do up the ass."

Turner said, "That doesn't sound at all pleasant."

"Not for the chicken," Fenwick said.

Over the past few years Fenwick had weaned himself from his triple-fuck system of categorizing people, places, things, and ideas he didn't like. He'd replaced it with the fuck-a-doodle system. Turner wasn't sure it was much of an improvement. The lowest rungs in Fenwick's fuckdom were reserved, as always, for Bears quarterbacks who threw game-losing interceptions, or Cubs pitchers who walked in winning runs. Turner didn't disagree.

Fenwick said, "This case is a no-win, ball-buster."

Turner said, "Aren't they all?"

"Sometimes we catch bad guys and bad things happen to them."

Turner said, "And sometimes we don't."

They grabbed blank forms and sport coats and got ready to leave. When the dew point in the city soared past seventy degrees, as it had today, Fenwick evinced a different set of oddities. Turner had learned to ignore most of these no matter what the weather. His practiced aversion of his eyes allowed him to take no notice of Fenwick's ostentatious grabbing, through his pants, of his underwear out of his ass crack as he stood up. 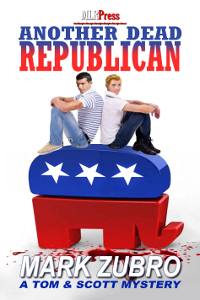 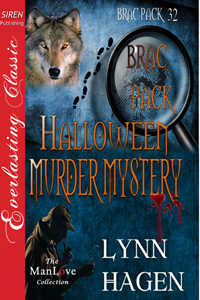 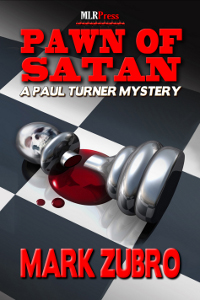 Pawn of Satan
Mark Zubro
In Shelf
$7.99
Tweets by
sirenbookstrand