Artist and playboy beach bum Sam's life is turned around when he meets blind Kieran and falls hard for him. Kieran is fiercely independent and doesn't need a man like Sam in his life. But Sam needs a man like Kieran and it's up to him to persuade Kieran he's worth a shot. 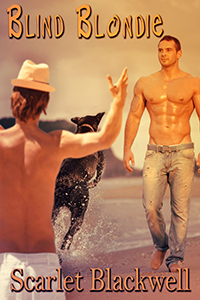 The sun was shining down from a cloudless, azure sky and I was cruising down Main Street with my windows down and my system blasting, hanging out of the window and perving on all the flesh exposed when the weather hits a certain temperature.

By flesh I mean male of course, men in shorts and flip-flops, men topless and—fuck me, I nearly ran a red light—one guy in Speedos smuggling a budgie.

Yeah, the sun makes me happy.

The traffic was building up, and my attention drifted to the near curb, a few people bustling out of shops or standing around.

There he was. Average height and blonde, wearing a white t-shirt and khaki cargo pants, he stood there holding up a homemade cardboard sign that read, incongruously, Taxi.

Man, I stared with my tongue hanging out. On a hot day, he was like water in the desert. His body was lithe and well-developed. On one decent bicep, he had a bright tattoo that filled every bit of luscious skin. His eyes were covered by mirrored shades but he seemed to scrutinize the street intently.

I had already convinced myself I was in love. There was only one tiny detail that threw a spanner in the works.

He carried a white stick.

I debated for a split second with myself. Was it a problem? Did you need your eyes in the sack? He still had fingers and a mouth and a working orifice, didn’t he? Wasn’t it so much for the better that he couldn’t see if I was having a bad hair day or cultivating a mountainous zit?

I pulled the sun visor down and checked my hair, grinning at my reflection. Well, I looked just great today, even if it would be wasted on him. I signalled and cruised over to the curb all casual.

Leaning over, I called, “Hey, are you looking for a ride?”

You understand, I wasn’t trying to deceive him. Not really. Merely doing my neighbourly duty for one not as blessed as myself. But shit, when I got up close, he appeared blessed in all the right places to me, especially between his legs, that promising bulge under his clothes looking mighty fine to this seasoned eye. Oh, I could give him a ride all right. The ride of his fucking life.

“Yeah, great.” He stepped toward the curb. Anxious that he didn’t fall into the road and ruin our first meeting by getting swept under a truck, I left the engine running and hastened out of the car.

Rushing around to the passenger side, I grabbed his arm as he reached the car. He froze instantly. A frown crossed his face. He pulled away. “I’m good, thanks,” he muttered and felt for the back door handle of the car.

I stepped away, perturbed. But I guessed he must get that a lot. My mind flashed back to Al Pacino berating Chris O’Donnell in Scent of a Woman for grabbing his arm. Asking him ‘Are you blind’? Proceeding to tell him he should do the grabbing.

It was all true of course. Why would holding a blind person’s arm help them out at all?

The blonde opened my door. He put a hand up to gauge the roof of the car and then down to the seat before he slid inside. He closed the door before I could help him and I trotted off back around the car to my own place. Looking over my shoulder, I saw he had already buckled his seat belt and sat patiently waiting, white stick between his knees.

I studied him for a moment. He was pale, as though he never saw the sun. His face was way too pretty for a man, but that was okay. I liked angelic-faced boys who were devils in bed. His lips were plump and pink and made for all sorts of X-rated scenarios. For a moment I imagined him bound and tied at my mercy. I shook my head, smiling to myself and checked my mirrors before a kind driver let me out into traffic. Was he gay? My gaydar suggested just maybe.

I tried not to think about him getting into the back of my car while we inched up Main Street. I mean, he didn’t actually think…did he? I hadn’t actually said… Only offered him a ride. That didn’t qualify as…

I glanced nervously in the mirror and was met with those inscrutable mirrored sunglasses. I turned down the Killswitch Engage track blaring from my stereo and cleared my throat. “Where to?”

“The animal hospital on Cedar Avenue,” he said. “Going to pick up my dog.”

Of course he was. That fact brought home to me again just what a major disability I was dealing with here. Fine for a tumble in the hay, not so good to deal with the morning after. I didn’t do real life. Far too selfish for that. I looked wistfully at his pretty face. When I let him out at the end of this ride that would be the last time I’d ever see him. I didn’t need the hassle of a dog and a stick.

“I never met a taxi driver playing Killswitch before,” he remarked.

My gaze shot to him in the mirror. Shit. “Yeah well—”

“And your radio is awful quiet.”

I swallowed. It was too late to confess. Hadn’t I already committed some kind of crime? 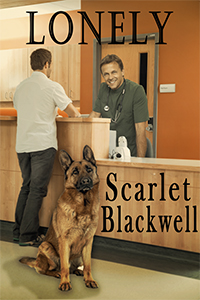 The Last Omega He Would Ever Choose (MM)
Marcy Jacks
In Shelf
$3.99
Tweets by
sirenbookstrand