Blood on My Hands (MM)

Because he's a vampire, Jonathon Splinter needs to feed, hungry for blood. He seeks out young men along Lake Erie in the small town of Bitter. As Halloween approaches, Jonathon devises a plan for his next hunt with the help of his mortal lover and personal assistant, Toby Kinks.

Life grows bitter for Jonathon, though. Someone discovered his true identity and witnessed one of his bloody hunts where he not only fed but also murdered the man. Now Jonathon is being blackmailed.

With Toby’s help, Jonathon seeks out the blackmailer, and the two devise a plan in which Jonathon will hunt and feed on the man. But on the evening of the planned murder, Jonathon Splinter's bloody life will change forever. 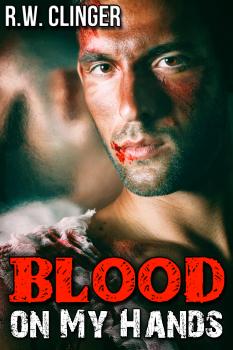 Blood on My Hands (MM)

Kalin shuffled past me in search of a special book for me: Lords of Chaos by Philip Dinsington. “It’s about eighty legions of demons in hell. I think you’ll like it, Jonathon.”

Accidentally our bodies came together in a slim aisle exactly the way he wanted them to: jean-covered cocks ever-so-slightly rubbing, chests touching, and nipples grazing. He didn’t kiss me, but he probably wanted to. Maybe he knew deep inside that it was best to keep his distance from me.

Some young male entered Hades Bookstore: semi-bald, scruff on his chin and cheeks, the bluest eyes I had ever seen, perfect complexion, slim build, no smile. I tasted his salt and sweat in my mouth, pulsing my taste buds. I smelled him as he passed me, making light eye contact. I felt his forearm accidentally brush against my right hand and ...

One of my freshly manicured fingernails dragged through the smooth and flawless epidermis of that stranger’s tight forearm, drawing his blood. A mere scratch that heightened my senses. Autumn-smelling blood leaked out of the breakage and I inhaled its sugary-sweet-mortal aroma deep inside my aged lungs, consuming the young man through painless perfection, bliss discovered.

Kalin found me again, a new book in his hands. Something about warlocks and witches. His crotch grew immediately hard as he stood in front of me. “I’ve found the perfect read for you. Something dark and memorable.” He passed me the book.

I read the title, “Magic and Immortals.”

“I couldn’t put it down. Buzzed through it in just a few hours. An evening’s read.”

I was still feeling afloat from the young stranger’s blood that flushed throughout my core. A rush of life poured throughout my body. Semi-unconsciousness. I felt lighter, overcome by the man’s strong and sweet liquid. Age became lost. Centuries melded into one day, one hour, one minute, and a single second. My eyes fluttered and my heart raced. The young man’s blood careened throughout my entire frame, generously polluting and healing my system, filling me. Something I occasionally called Red Lust. Food for me. A drug provided for me, or I had meticulously stolen from him. I can only describe that overwhelming emotion how meth works on and for humans, an immediate high and addiction. Buzzing in my ears. Clarity. Numbness. A sliver of Divinity opening up its palm for me to rest in. Eternity unleashed. Life after death. Immortality. Pleasure. Pure bliss that almost felt superficial, but it wasn’t anything of the sort.

Kalin went in search of yet another tome, busy.

I didn’t kill the visiting, young stranger there and then that day inside the bookstore. Maybe I should have. Rather, he became a vat of life for me as I followed him to the fiction area: mysteries and thrillers. Soul-juice for me. A Red Lust beverage for me. So tantalizing for me. Rushed bliss. Euphoric splendor. How elementary it would have been to sink my protruding fangs into his forearm, neck, or shoulder and poison him with my curse.

Instead, I purposely bumped into him and again and grazed fingertips against his forearm with a fingernail, taking what I needed and wanted from him. Blood. Food. Red Lust. Why murder the young man when he could became a snack for me?

I listened to Kalin rifle through books nearby, lost in his world, humming.

The stranger must have noticed that he was bleeding and entered the bathroom at the rear of the shop.

Although I wanted to enter the restroom behind him and enjoy more of a snack, Kalin found me again.

“Best read ever,” he said, and dropped a small paperback in my left palm. “It’s about vampires in London during 1840.”

“Interesting,” I told him. “You know what I like.”

He smiled, winked at me, and whispered, “So handsome. So beautiful. So mine for these few minutes.”

As he passed me, I thought he would kiss me, overwhelmed by me. We didn’t kiss, though, even if I sensed that he deeply wanted. Instead, he said, “Let me get Lords of Chaos for you.”

I grinned and thought: I am a lord of chaos. There’s probably a chapter in the book about me.

Off he went yet again.

The young stranger visiting the store exited the restroom. He moved up to a shelf of mysteries and reached above him for a large book from a high shelf, showing off his hairless stomach and navel as his T-shirt pulled upwards.

I licked my lips, wanting to place my lips and teeth against his exposed area. Desiring more of his blood and needing more strength. So deliciously looking, and wanted. Sweet blood for my system. More food.

Kalin intervened with my methods. “It’s a second edition. Only fifteen dollars. I think you’ll enjoy it, Jonathon.” He looked at me with a glimmer of lust in his eyes. Did he want me to be his forever? Had he fallen in love with me? I was certain of both answers. Yes. And yes. So easy for me. Intoxicated by me.

He passed me the book and our fingers touched.

I shivered. “I’ll love it. You have such great taste, Kalin. Thank you again.”

We moved up to the cash register area. He keyed numbers into the modern device and I gave him a fifty. He passed me change.

Before leaving the store, I smelled the young male stranger one last time: burning red, hot blood. Good food. Thick desire. Unfortunately, I would never see or smell him again.

Kalin bagged my books and I told him, “Until we meet again. Hopefully soon.”

He winked at me.

I chose not to wink in return.