Some sins stain not just the soul but the bloodline. The truth behind a long buried secret emerges in a bloody battle that engulfs a town and threatens the lives of Police Chief Bob Johnson and his family as he works to unravel a knot of clues to new and old crimes. 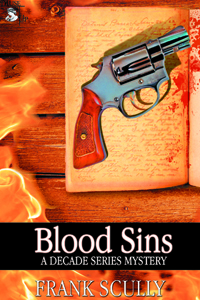 In their winter camouflage outfits, Bud and Mac blended into the shadows between snow-covered bushes next to a fence along a dark alleyway. They had been watching the house for the past hour. The falling snow had almost covered them, making them look like misshapen snowdrifts. Their new car, a 1953 nondescript tan Mercury, was parked at the end of the alley on a side street. Both men were armed with their pistols, and Mac was carrying a large bag of his toys.

“Damn.” Mac sniffled and wiped his nose on his sleeve, “it’s colder than a witch’s tit out here. Why can’t we do it now and get it over with before I freeze my prick off. Patty wouldn’t like that,” Mac whispered with a snicker.

“Shut up!” Bud hissed. “We have to wait until seven. Not before and not after. You want that bonus, don’t you?”

“Yeah, man,” Mac replied softly. “For that kind of dough, I’ll stand on my head and fart Dixie for the man at the right time. Hell, with that kind of bonus, I might just retire. But, shit, is he ever picky.”

“Retire, hah! You never save a dime. You’ll just blow it all on some stupid bitch,” Bud said sarcastically.

Bud let the thought of retirement run through his head. It would be nice. Maybe with this payoff, he would. If he did, he would have to kill Mac. He couldn’t afford to have him still working. If Mac ever got caught, he would turn rat in a hurry to save himself.

No, when I retire, so will Mac. He just doesn’t know how.

Bud watched the house quietly and hoped Mac would shut up. It was hard enough waiting in the cold without listening to Mac’s never-ending crap and his sniffling. They had gotten into a well-hidden position just after dark. Inside the house, people were moving around. The operation looked like it would be a piece of cake.

“Are you ready?” Bud asked. “I don’t want to waste any time when we’re in there.”

“It’s supposed to burn, not blow, remember.” Bud was getting fed up with Mac’s attitude.

“Jesus, man, take it easy. I know my job. You just get me in there, and it’ll work. Just in case, I brought along my insurance.” Mac pulled two sticks of lethal-looking dynamite tied together with a short fuse from his back pocket.

“Shit! I told you not to bring that. You’re going to blow us both up,” Bud said sharply. The dynamite made him nervous.

“Relax. It can’t go off that easy. Of course, if somebody shot me in the ass, I’d never know it.” Mac had to hold himself to keep from laughing out loud.

“I don’t give a shit if you stick it up your ass and light it. You can be a Roman candle, for all I care. I just don’t want to blow with you, you dumb shit!”

Mac went back to sorting through his wares in his bag again. Bud silently fumed over Mac’s lack of mental acuity. The clock in his head ticked off the minutes to jump-off time.

“What’d you do about the garage?” Bud asked.

“While you were over here playing with yourself, I got in there and set up a little surprise. There’s a small device attached to the door that’ll go off when it’s jiggled. When it goes off, so will the car’s gas tank. Good thing he didn’t go in there when they got home,” Mac reported smugly.

“Okay, it’s time to get this show on the road. Get your gun out, and for God’s sake, don’t shoot me. I’ll go in first.” Bud started off quietly toward the back door. He hadn’t seen anyone moving around inside for a couple of minutes. With luck, they could burst in and have everyone under control in seconds. Mac was lugging his bag along behind Bud.
They stood at the back door for a moment before Bud slowly turned the knob. It wasn’t locked. The rubes in these small towns never locked their doors. Bud frowned with disgust. He held his breath and nodded to Mac and cannoned through the door with his gun in front of him.