Daniel Basile, known to everyone as Digger, has loved Emmi LoPresti from afar most of his adult life. She’s the youngest daughter of Mob boss Tony LoPresti, for whom Digger has done extensive work. But Emmi wants nothing to do with him because he’s a contract killer. When her long time boyfriend moves across the country without her, ending their relationship, Digger sees his chance. But Emmi is no easy conquest.

During a snowstorm shortly after the holidays, Digger is at the LoPresti home for dinner with Emmi’s family. He wastes no time in letting her know he hasn’t given up on possessing her, but she tells him in no uncertain terms nothing will ever happen between them.

Until he kisses her later that night under the mistletoe in the upstairs hallway. But is this only sex? Or can the woman of his unending desires learn to love him?

Digger had never been this aroused. His dream woman … his all-consuming passion for years was pressed up against a door, kissing him like she was out of her mind with the need to fuck. He couldn’t think. He could hardly fucking breathe.
He trailed his tongue down her neck, following that with moving his hands slowly down her arms and across her breasts. The loud moan escaping his lips couldn’t be helped. “Do you have any idea how long I’ve wanted to touch you?”
She shook her head, her beautiful dark eyes filled with lust. He’d been waiting a long time for that, too. To see her look at him that way. It was almost too much to handle. “All my life, Emmi.”
Digger massaged her breasts through the sweater, watching her face the entire time. Any sign of going too far, too fast, and he’d back off. As much as he wanted to possess her, he would not fuck this up. If he did, he wasn’t certain when or if he’d get a second chance. “I need to see these.”
When she didn’t flinch or protest, he brushed his hands down to the hem of her sweater and tugged it over her head. Smiling at the pretty lace bra, he eased the straps down over her shoulders, slowly.
“Digger, please … for the love of God.”
Dare he believe his ears? Was she impatient at how carefully he was proceeding? He cupped her breasts again through the lace. “For the love of God, what?”
“Fuck me. Please!”
He nearly came in his pants. Digger’s mind went blank except for unbridled lust. He turned her around and pulled down her jeans, taking her panties with them. The need to be inside her outweighed all rational thought.
“Condom,” she said, her voice breathless. “You probably want to use one, right?”
What? “Fuck.” He had to take several deep inhales before his brain would work. “Do you have any in here?”
“No.”
Fuck! Fuck! Fuck! He hadn’t brought any with him. Why the fuck would he, after all? This was completely unexpected.
“I’m on the pill. And I’m clean. Shit. I’ve never had sex with anyone but Sam, and I know one hundred percent he never cheated on me.”
He’d had a feeling that was the case, but hadn’t wanted to embarrass her by asking. “Okay. Are you all right with me not using one? Because I can’t wait any longer.” He had to have her, right fucking now, and he suspected the information about Sam being the only man she’d ever fucked had slipped out only because of the circumstances.
“Yes. I’m okay with it if you are.”
Fuck it. He had no reason to think she was lying to him about being on the pill, or about not having any social diseases. “I am.”
Every fantasy he’d ever had surrounding this woman was about to come true. When he brushed his hands over her upper thighs, Emmi cried out in pleasure. It was too much. His self-control was fucking gone. “Bend over.”
As she did, shivers ran down his spine. He’d bet good money she’d never done anything this raw or spontaneous with Sam. He removed her bra and cupped her bare tits from behind, eliciting more cries and moans from her. His pulse raced, and sweat broke out along his hairline. “Oh my God, these are fucking incredible.”
“That feels so good!”
Digger massaged the mounds of flesh he’d longed to touch for years until he couldn’t stand it any longer. He pulled down his zipper and freed his dick before sliding two fingers into her pussy. The velvety softness was slippery as hell.
“Oh fuck. You’re so goddamn wet!”
“As if I can help that.”
He’d done that to her. Him. Daniel Basile. No one else. She did want him. His body, at least. And today he’d take that because the rest would come in time.
Digger gripped her pussy from behind and thumbed her clit, nearly coming on the floor when she moaned loudly and pushed back against him. He’d found the right spot so fucking easily. He massaged her clit for a few seconds, nuzzling her neck, but he was losing it quickly. He had to be inside her.
When he slid his dick into her pussy, she cried out and replanted her hands on the door. “Oh my God, Emmi. That feels so fucking good!”
“Good” was not an adequate word for the sensation of finally being inside his Emmi. Digger couldn’t imagine anything more perfect.
“Yes,” she whispered. “It’s exquisite.”
Exquisite. Digger took that word in and savored it as he held onto her right hip with one hand. He kept up the pressure on her clit while he fucked her, slowly at first, letting her get used to his length and girth. He had no clue how big Sam’s dick was, but he doubted they’d had an adventurous or exciting sex life. Oh, the things he would teach his Emmi! 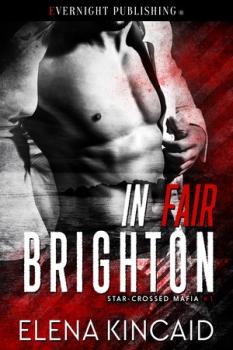