On a first-class flight, Bruce encounters a service dog that’s only slightly less annoying than the woman who owns it. What no one realizes is that, thanks to a monkey bite, the dog is now a vector for a plague that will soon sweep the planet.

A sexy, young flight attendant named Burk offers to help Bruce home and to stay with him while on break. Burk organizes Bruce’s home for survival as they watch civilization begin to fall apart. Slowly, they collect others in need, including a young transman. When they hear cathedral bells calling the survivors to come together, they all pitch in to help.

Can love bloom amidst the apocalyptic death and destruction? 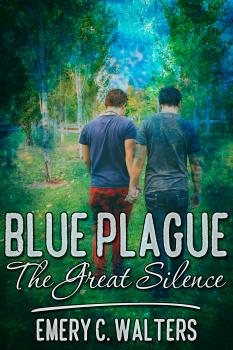 I walked back in the house and down the basement stairs, flicking the lights on twice before I remembered. I went back to the kitchen, rifled through the drawers until I found a flashlight, and headed back down again. Behind me, Finn started singing the theme song from Jaws. Thanks a lot, kid. I hadn’t been scared until then.

Yes, it was dark, obviously. I laughed at my fears. I stepped off the bottom step, and to my left, something moved. I had the flashlight in my left hand because I’d been holding the railing with my right one on the way down. Of course, I dropped it, and it fell on my toe, bounced off, lit the ceiling, and went out. Something brushed my face, and I screamed, as they say, like a little girl. I forgot I had two wrenches in my back pocket and stood there clutching the railing, grateful I hadn’t fallen on my face in -- whatever had moved. Was it inching closer? What was it?

A light bounced off the railing and onto the floor. Steps thudded down behind me, and something soft pushed into me, almost knocking me over into the thing. Done screaming, too scared now to squeak, I saw the light from another flashlight come over my shoulder and rest on a moving mass of mice and rats and bugs, crawling over and devouring what had once been a person. At least, I presumed it had been because it had a hand with a ring on it.

Finn’s voice quivered behind me. “Now in a role playing game, that would come alive, and we’d have to fight it to get the ring and ...”

I said, “No, thanks, I’m out of here! Thank you for saving me!” Luckily for what bit of ego I had left, I remembered I was the adult and turned Finn around to go upstairs ahead of me. But he wouldn’t let me do it.

“I have the flashlight. You go ahead. Age before beauty, you know,” he finished that more quietly. We got upstairs without incident, and Finn just shut the door firmly behind me.

“We’re still having pizza right? The oven’s almost up to temperature!” He smiled sweetly at me. “There’s beer in the fridge, and it’s still cold, too. You’d like a cold beer, wouldn’t you? To settle your nerves? Because, fuck me sideways, I sure would.”

We ended up sitting at the kitchen table, which I noticed was from the fifties and probably worth a fortune by now. Finn stuffed some dish towels in the crack beneath the basement door to make me feel better, got out some beer, and popped the pizza in the oven. It hadn’t occurred to me that people might have gas ovens, since my house had been updated to all electric years ago. What else had I probably overlooked?

When Burk came in, following the aroma of the pizza cooking, he washed up, grabbed a beer, and joined us. I told him about the radios in the cars, and he got excited and wanted to go get them right then. Finn made him wait and eat with us first.

Afterward, Finn went into the garage with Burk, and I, being no smarter than an hour ago, went upstairs to check out the bedrooms. I wished I hadn’t. One was full of toys, and I felt like a thief taking some small cars for the boy at the church, but I said a feeble promise to the child who had owned them that they would give another child pleasure. And then I took the clothes, just piles of little boy shorts and shirts, shoes ... knowing in my brain, if not in my heart, they would be put to much better use at the church than here.

After that, I couldn’t take it anymore, and as soon as the kids were ready, their hands stuffed with radio parts and more food and beer, we left to walk home before it got dark. I hoped we’d never have to go there again.

That night, after we had all gone to bed, Burk came to my room.

The Man with the Big Gun (MM)
Gordon Phillips
In Shelf
$2.99
Tweets by
sirenbookstrand