Beanie MacKenzie and her husband Mac have led perfect lives, with perfect families and perfect jobs they both love, he a leading cardiologist, she a teacher at a school for troubled children. Now they have the perfect home, a big house on a quiet Albany street, just perfect for raising a big family. Only the babies they’ve been trying so hard to conceive just won’t come.

Stressed in her marriage and fearing she may never bear children, Beanie throws herself into her work, surrounded by society’s throwaways. Enter Beanie’s new student, seven-year-old Blueberry Truth Crowley, a fiercely independent child whose life had been anything but perfect. Abused, neglected, and mistrustful of everyone around her, Truth throws a monkey wrench into the perfect order of Beanie’s classroom--and into her very life--challenging Beanie’s notions of motherhood, commitment, and family. But their unlikely bond may be just the thing to teach them both about love. 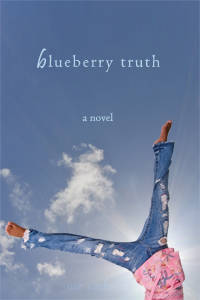 His smile is nearly as blinding as his clothes. “My brother got me three.” He holds up three fingers. The shirts probably fell off the back of a truck, but I won’t say anything about that.

The rest of the kids filter in one by one. Todd’s hair has started to grow back; the little blond fuzz makes him look like a baby chick. Elena can’t stop talking about her new baby niece. And Simon stands near the door on one leg with his head cocked to the side. I ask what he’s doing.

We settle in, nine kids humming along during reading. Nine kids doing math without a hitch. I glance at Dot, helping Keisha with math problems, and she glances back and raises an eyebrow. It’s nearly lunchtime, and I know she’s thinking what I’m thinking: this can’t last. Turns out, the first incident after vacation happens without much of a bang when Sister Mike pops her head into my very peaceful room and asks if she might have a word.

Sister’s office is the size of a broom closet and has her desk and two chairs squeezed into the space. Usually, there’s one kid or another doing time in one of the chairs. But not today, and Sister invites me to sit, her broad dark face beaming with a beatific look that can only mean trouble. “I know you already have nine children in your classroom, Beanie.”

This is the conversation I’ve been dreading. State regulations allow a maximum of ten kids in a class like mine, the ratio being five to one with Dot, my assistant. This doesn’t take into account that Todd likes to wander off, Eddie has psychotic episodes, and Simon and Ray Ray are autistic. Every kid in my room would benefit from one-on-one. Sister knows this. She’s been very careful about guarding my students and keeping class size at nine. A tenth child isn’t illegal, but it should be.

I sigh and lean back in the chair.

“She’s too old for Anna’s room, and Terry has ten in his group already.”

All of my kids need a lot. Most of them have incident notes and individualized education plans the size of the Manhattan phone book. “This won’t tell me much.”

“She was in a regular classroom?”

“Up until before vacation. She was having some difficulty. She’s been to eight schools in three years, so I imagine she’s fallen between the cracks.” Sister folds her hands together as though she’s about to pray. “On Saturday, she assaulted her uncle with a baseball bat. Broke his nose while he slept. The uncle claims she tried to kill him. He may press charges.”

Kids get sent to this school for all sorts of reasons. I’ve had children in my class who set fires, children who ran away from home, and children who were taken out of abusive or neglectful homes. But I’ve never had a kid who attempted murder.