Years of jobs, kids, and other family demands can take the excitement out of a marriage. But when neighbors become lovers, suddenly new and unexplored worlds can open up. Especially when they go "Boating with the Buttermores".

Well, I can certainly say I will never step foot on another boat without a little ring-a-ding running through my head. Playfully raunchy is how I would describe these two fun-loving couples. COFFEE TIME ROMANCE 3 CUPS

A gathering of several couples for a back yard barbeque was the start of an evening of too much eating, too much drinking, a few dares made, and a few dares taken. After the others had left, our ‘drinker’s courage’ lead Kate and I to shed our clothes and join Ron and Julie in the hot tub. It wasn’t long before Julie’s soft body was next to me and Kate was wrapped up in Ron’s arms. For a while I waited for the ‘buzz’ to subside and return four embarrassed people back to their own spouses. It wasn't until I saw Kate’s arms drop around Ron’s neck, that the reality of the situation began to settle in. When I looked into Julie’s eyes I knew that this was not teasing. As Julie’s body melded against mine and our lips met, a new world opened before me.

Kate and I made love that night; several times in multiple positions, but not with each other. For the first time in our married life, we were unfaithful to each other. Not in the manner of a clandestine affair, but side by side on the large bed in Ron and Julie’s bedroom. 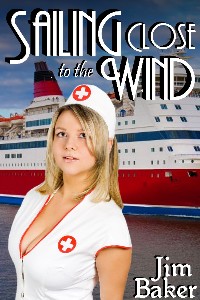 Sailing Close to the Wind
Jim Baker
In Shelf
$3.99