“You are one of us. Say no to Morningstar.” Moments after Sage Travers receives this note from a blonde girl in a wheelchair, the girl is kidnapped by a man with hunched shoulders, misshapen fingers, and glittering feral eyes. Sage has a seizure and “sees” her in the back of a black mini-van, terrified by the creature before her.

Despite Sage’s objections, his mother sends him to Morningstar Academy to receive treatment for his epilepsy. Soon after arriving, he realizes his ability to “drift” to other locations during his seizures makes him invaluable to the women in charge. They wish to subject him to a procedure called “bonding,” which is irreversible. Can the girl in the wheelchair save him and help destroy the sisters? 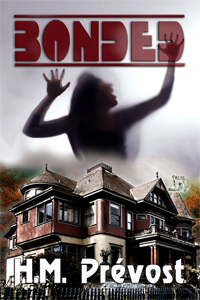 “When you have a seizure, what do you see?” Dr. Melrose studied his face so intently Sage felt a momentary jab of fear.

He’s lookin’ at me like a cadaver on the dissection table. “I don’t see anything. I’m unconscious. Not conscious. Get it?” The last time he told a doctor about his visions, he was prescribed an anti-psychotic that took him on a nasty trip to side-effect city.

Dr. Melrose discovered the leaky pen in his pocket and threw it into the trash. “I’d like to conduct more tests.”

“No more,” Sage said. Get yourself a rhesus monkey and do all the experiments you want.

Melrose put on his glasses and aimed a “the-doctor-always-knows-best” look at Sage. He took a square, plastic film from the files and clipped it to a lighted view box. The film showed a brain. Multiple folds and creases surrounded two neatly separated hemispheres.

“Last night?” Sage bolted into a sitting position. The doc stuck him in the claustrophobatron? “While I was unconscious?” The Magnetic Resonance Imaging machine was a coffin for the living. A long cylinder swallowed your entire body, and you waited and waited, trapped in this massive iron apparatus, until the scan ended.

“It was best to do this when there was lots of electrical activity to document.” Dr. Melrose tapped the photo of Sage’s brain. “There’s scarring in the left hemisphere.”

Sage’s heart accelerated to twice its normal speed, and he bit down on his lower lip. The small white spot next to the doctor’s index finger transfixed him. Brain damage.

“Mrs. Travers, your son is a prime candidate for SUDEP.”

Her face crumbled, and a fresh avalanche of tears cascaded down her cheeks. Sage had read about Sudden Death By Epilepsy, but it was rare. His chances of winning the state lottery were better. All the other doctors had said so. Melrose was talking out of his ass.

“Epilepsy is a complex disease, and Sage presents a challenging case.” Melrose licked his pale lips and took the clipboard from the nurse. “The scan proves that his seizures are causing permanent damage. As long as his seizures continue, the damage will worsen.”

Sage’s knuckles whitened as he crumpled the bed sheets in his fists. Doctors had problems with his particular type of epilepsy because he had tons of seizures, severe ones, yet didn’t suffer from learning disabilities or permanent memory loss. He aced most subjects at school without any serious studying.

“SUDEP,” his mother repeated, as though the doctor had given him two weeks to live.

Sage glowered at Melrose. Where’d his medical degree come from, the Online University of Quacks and Charlatans? He took a long breath. The scar was located on his fronto-median cortex, the area associated with self-control. He’d read the medical textbooks, deciphering them with a dictionary, and he’d interrogated all his previous doctors about his condition.

Sage swung his legs back and forth on the side of the gurney. Permanent effects were inevitable, weren’t they? After ten years of overactive synapses firing in his skull, the gray cells were dying.

The doctor’s pupils flared. “Sage, the damage is irreversible. You need treatment to prevent further lesions from occurring.”

Sage’s mother held the suede jacket closed around her neck.

“Mrs. Travers,” the doctor said, “a few hours from here there’s a rehabilitation center for teens with a variety of disabilities. School runs normally during the day, and therapy is available in the evenings. Drugs don’t work for Sage, so you need an alternative.”

“This particular facility is run by philanthropists who are devoted to teenagers in need,” Melrose said. “There are no fees involved. Sage would share a room, of course. I’ve already spoken to them. There’s an opening.”

“You mentioned that Sage has difficulty socializing,” Dr. Melrose said.

“He doesn’t go out with friends, or on dates.”

Heat flushed Sage’s cheeks. Thanks for the extra dose of embarrassment, Mom. As if I don’t get enough of it already.

“Sage will blend in. There will be less stress, less peer pressure.” The doctor’s voice became hypnotic. “It’s been documented that stress increases the frequency and severity of epileptic seizures.”

“Oh.” His mother toyed with the zipper on her jacket. “I thought sending him to public school would teach him social skills. I didn’t think…”

“You did the right thing.” Melrose placed a calming hand on her arm. “Now do a better thing. Place him in the care of professionals.”

You’re smooth, doc. Sage stared at the white lesion on the brain scan.

His mother raised her head and tossed back her tangled hair. “How soon can he start?”

“Elena will send a bus later today.” Melrose said the woman’s name quickly, as if it were a hot stone it hurt to hold. “Sage, I’m sure you’ll feel at home at Morningstar Academy.”

Morningstar. The name burned into him. “I’m not going,” Sage blurted. How did the girl know he’d be offered a place? And what was so bad about Morningstar that she’d bother warning him not to go?

“Sage, it’s an opportunity,” his mother said, her face drawn, “and you will take it.”

When it came to his health, Sage knew his mother would fight to provide him with the best possible care. “What do we know about this place?” he argued.

She worried about him too much, spent every moment of her free time looking out for him and playing round-the-clock nursing aide. Sage crossed his arms, trying to look as authoritative as possible.

“Listen to your mother.” The doctor’s pen tapped insistently on the clipboard. “You will never be prescribed anti-seizure medication again. Many epileptics have learned to deal with their seizures without the help of drugs.”

“I don’t care,” Sage said, determined to get what he wanted. For once. “I’m staying here.”

“You’re not.” His mother shoved her hands into her pockets and straightened her shoulders. Her deep-set eyes bored into him and he flinched. “There will be no further discussion. Dr. Melrose, my son will go to Morningstar.”