A Gentleman in Love

A Christmas wedding and a growing passion. Will a political scandal destroy their love?

Desperate to exonerate her family name of any wrongdoing, Shelby Chesterfield gate-crashes the Foreign Office Christmas party to ask her father's accuser for help. When Ambassador Samuel Hardwick refuses to cooperate, Shelby is determined to ruin his diplomatic career any way she can, and a chance to do so arrives sooner than she expected.

Caught in a passionate embrace, Shelby puts Sam on the spot and tells journalists they're engaged. But her plan backfires when Sam turns the tables on her.

Sam wants no commitment to anything or anyone except his career. But when his best friends are killed in a violent terrorist attack, leaving their daughter orphaned and in his care, he has the daunting task of finding a wife and substitute mother, or he will risk losing his newly acquired ward into the foster care system. With time running out, when Shelby asks for help to clear her father's name in a political scandal, Sam offers support in exchange for a Christmas wedding.

The trouble is…Shelby knows about his ongoing affair with Lady Donna Ruston.

Can Shelby and Sam work together to achieve their goals, or is their winter romance fated to fail before it's begun? 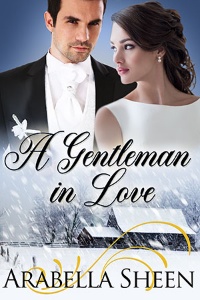 A Gentleman in Love