How to get a best friend into deep trouble . . .

But when the handsome Jake turns up with an equally handsome friend, and the alcohol takes its toll on Rose’s self-control, the eighties theme party moves into the realm of the naughties.

Reader Advisory: Contains nudity and grown women (who ought to know better) dressed as naughty schoolgirls. 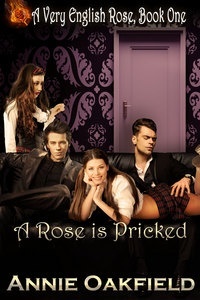 More From A Very English Rose

Becky wagged a finger. “I hope you boys aren’t planning to take advantage of me.”

“Oh? Why not?” Becky jammed her hands onto her hips and pouted.

“Because we’re not those kind of—”

Jake nodded. “Adam, I think our young friend might be hinting at something.”

“Why don’t you loosen her clothing? Help her cool down a little.”

“You heard the lady. She wants you to stay. We should all get cozy.” He slipped off his jacket and hung it on the back of a chair. But when he reached for the buttons on his shirt, Becky stumbled across, wagging her finger.

“You can get closer than that, big boy,” she chided. Encouraged, he pressed himself against Becky’s barely covered buttocks. She glanced back at him and grinned. Slowly, deliberately, she ground her cheeks against his crotch. Adam’s hands followed her slow, sensuous movements as he slid them round her waist.

When Jake’s chest was exposed, Becky bent forward to kiss below his throat. At the same time, she pushed herself more firmly against Adam, rubbing her cheeks up and down on his cock. Adam dared to pull up the short skirt and took hold of Becky’s generous buttocks. With only a thong in place, her cheeks were fully bared. Adam’s big hands squeezed and caressed the fleshy globes; he was still unable to believe what was happening.

She pulled Jake’s shirt out of his waistband, leaving him to slip it off completely. Once he’d set the shirt aside, Jake pushed her arms up above her head, then slowly opened the buttons of her blouse, making sure his knuckles brushed against her breasts. Adam slipped his arms around to her front, sliding his hands onto her thighs. When he brought them together at her crotch, he slid his fingers across the thong, pressing it firmly against her flesh.

“Mmm . . . Now, press that hard cock against my butt.” She tilted her head to the side and sighed. Jake’s hands cupped her ample breasts, rubbing them with firm strokes of his fingertips. When he encountered her hardening nipples, he brushed them several times, encouraging them to grow.

Adam grabbed a handful of one cheek and squeezed. His other hand stroked between Becky’s thighs, pressing the material against her lips.

“Your thong feels damp,” he said.

“Maybe I should investigate.”

“Maybe you should.” She leaned back against Adam as he stroked her crotch. Jake’s hands continued to caress her breasts, cupping and squeezing. Her nipples had grown hard enough to show through the bra. Jake bent down and pressed his lips to the red lace. Becky sighed as she was sandwiched between the men, both eager for her body. Adam’s fingers were making small wet sounds as they slipped beneath her thong. His touch was heavenly.

She’d fantasized about being with two men for a long, long time. She grinned at the idea of both men having her. Perhaps they’d have enough energy for more than one time.