Heat Rating: Sensual
Word Count: 59,491
0 Ratings (0.0)
Contemporary Paranormal Shape-shifter
[BookStrand Paranormal Romance, shape-shifters, HEA]
Tyrell Blackhawk is home and staying at the lodge his brother Devon owns. Recovering from near fatal wounds, he’s not easy to live around. Hiring a private physical therapist goes against the grain, especially a sassy and very feminine one like Page. Acting like a wounded wolf, the sparring match begins.
Nadia isn’t at all happy with stopping over at the Blackhawk Lodge. Her peeve vanishes when she steps up to the desk and encounters Tyrell’s brother, Devon. Who would have thought she would find the perfect man for her ad campaign out here in the sticks?
As they try to untangle attractions that grow in spite of their outward choices, a fifth entity asserts itself. Tyrell’s wolf, a totem carried by the Blackhawk gene, makes it clear that Nadia is Tyrell’s life partner. Tyrell wants none of it. He is ready to settle down, and Page is more his type of woman, but his need for Nadia is undeniable.
A BookStrand Mainstream Romance 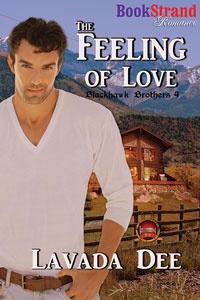 He glanced over, and again noted Tyrell’s drink of choice. “I still can’t believe you’re actually drinking wine. You, the beer and hamburger guy. Good grief, something is in the air. First, Nadia does a flip on us and becomes real. Then you do an about face, including your drinking habits.”

Devon’s statement about Nadia opened the door for Tyrell, and he didn’t waste any time pushing through it. “Nadia…what’s your take on her?”

“You’re fishing. You know damn good and well you purposely hung back on the trail coming back, so I would have her to myself. I should hold out on you for such a sneaky move.”

Tyrell pushed out of the lounger. “Want another beer while I’m up?” Wine was good but he was ready to switch.

“Not yet, and I don’t need a peace offering. I was glad I had a chance to talk to her, though to tell the truth, she was scaring the shit out of me.”

Tyrell didn’t want Devon to read his body language, and getting beer was a good excuse to put some distance between them. Now, he took his time and called back. “Do you feel any attraction?”

Tyrell almost dropped the bottle he was holding.Damn. Schooling his features, he took pity on his brother, and suggested he come in where it was warmer.

Devon was grinning when he came in the door. “So to get back to how I feel about Nadia. She is pretty, maybe more…more like beautiful. I can imagine…”

Tyrell knew he had asked for it, but Devon was taking it too far, or would be in a few seconds. “Knock it off.”

Now Devon was laughing. “If you can’t take the heat…” He half fell down on the sofa and put his feet up on the coffee table. “Okay, yeah, I’m finding myself liking her. Attracted? Not like you’re asking, or maybe like you’re trying not to ask. So a question for you. What’s going on?”

Tyrell leaned forward. “Remember the talk Dad had with us about women?”

Devon nodded. “Yeah, sort of. That’s going a ways back.”

“It was in that same conversation that he explained about the totem our people carry. An ancient gene that allows some of us to shift into another part of ourselves. By that time, I had experienced it and unfortunately you, Grant, and Cooper had witnessed it. Hell, none of you wanted to share a bedroom with me.”

Remembering back, the two brothers were silent for a minute. Then Devon said, “After explaining the totem, birds and bees seemed tame.”

Tyrell took a drink of his beer and sighed. “He told us about taking the time to seek out the one woman that was meant for each of us. The one that would complete us. Grant and Cooper have been lucky.”

Devon interrupted. “Not so much Cooper. You weren’t here, but finding and then losing Galynn almost destroyed him.”

“Yeah, Grant called me. He was really worried about our boy.” Cooper was the youngest of the Blackhawk brothers, and they all felt protective of him. Tyrell maybe more so than the others.

Devon took a deep breath and leaned back trying to look nonchalant. “So are you telling me what I think you are? Nadia?”

Devon seemed wary, like he didn’t want to say too much. Tyrell couldn’t blame him. Finally, he found words and said, “Are you sure? I mean how could you be so positive. She doesn’t come from here. New York?” He laughed. “Sorry, thinking about the Pace Salsa ad that’s running on TV.”

A visual of the ad where a group of cowboys sit around a campfire and make derogatory remarks about the salsa being made in New York City hung over the room, and for a minute, lightened the conversation. Then Tyrell brought it back around. “It’s the wolf within. For years, I’ve relied on its senses to know things. On missions, it was this other identity that kept my team alive and gave us the advantage to get the job done. Not just mine, but the other men as well. It’s hard to explain, but it is sort of like living in a parallel world.” He let his gaze lock with his brother’s and knew the moment Devon accepted what he was saying as the truth.

Accidentally Theirs (LoveXtreme)
Lexie Davis
In Shelf
$4.99
Tweets by
sirenbookstrand