When the apocalypse happened, it was nothing like anyone expected. Josh Reynolds has to find a way to survive when all the computer chips in the world stop working.

But he doesn’t have to do it alone. He has his man by his side, and together they can overcome all odds. 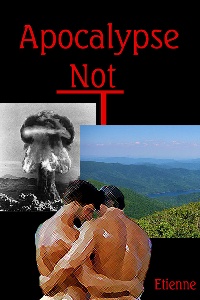 “Right behind you. Want me to drive this time?”

“Sure. I could do with a nap.” Back in the van, Josh settled back in the passenger seat and closed his eyes. “Wake me in a couple of hours, okay?”

An hour later, Randy pulled the van to an abrupt stop and said, “Wake up, Josh, there’s trouble ahead.”

Josh shot up from his reclining position and looked around. “What trouble?”

“Just down the road. Looks like some people in a Conestoga-style wagon are under attack by bandits on horseback.”

“Have the bandits spotted us?”

“Not yet,” Randy said. “I think they’re too busy tormenting those folks in the wagon. I’ll get my rifle. It looks like an easy shot from here.”

“Go for it,” Josh said, and reached under the driver’s seat. “I’ll bring my trusty six-shooter.”

“Best leave him in the van, what with bullets flying around, and who knows what else.”

“Good,” Randy said. “Should I pull up closer to the fight?”

“If you can do it quickly and quietly.”

Randy started the van and pulled forward until they were within a hundred yards of the battle. As they hopped out of the van, he said, “I’ll go for the two riders at the back of the wagon, and you can take out the one in front.”

Randy knelt in the highway median, took careful aim, and with a couple of well-placed shots, knocked the two men at the back of the wagon out of their saddles. Meanwhile, Josh ran forward until he was within easy pistol range and shot a third man as he turned in his saddle to see what had happened to his cohorts.

They ran up to the wagon, which was by then on fire, and looked inside. Josh saw an older man and woman lying obviously dead behind the bench that served as a driver’s seat for the wagon, and heard a moaning sound coming from its rear. They hurried to the back of the wagon, where they saw a younger man lying on the floor bleeding from a leg wound.

“Help me get this guy out of the wagon,” Josh said.

“Behind you!” Randy said in a shout.

The next thing Josh heard was the sound of a shot being fired, and he turned just in time to shoot one of the riders Randy had knocked out of the saddle. The man had managed to get to his feet, and take a shot at Randy, who was now lying motionless on the pavement.

Josh turned back to the wagon, and pulled the moaning victim from its bed, then he turned to take a closer look at Randy, who’d taken a gunshot wound to the head.

“Fuck,” Josh said to nobody in particular, then his training as a Navy Corpsman kicked in. Living first, then wounded, then deal with the dead, he thought. He carried the victim, who he now realized was a young man in his twenties, over to the van and got him situated in the passenger seat. Then he returned to where the wagon had been -- the horses had been spooked by the fire and bolted, taking the burning wagon with them -- picked Randy up and carried him to the van as well. He opened the backdoor and managed to get Randy’s body laid out beside their cargo. Rex began to whine and lick Randy’s face.

“Rex, sit,” Josh said somewhat firmly. Then he grabbed a cloth and wrapped it around Randy’s head to stop the blood from getting all over the floor.

Time for first aid, he thought, and turned back to the young man in the passenger seat, noting for the first time that the man was a rather attractive blond with a really defined body. He treated the man’s injuries as best he could, then he returned to the fallen bodies and searched them. He retrieved wallets, guns, and pocket contents, leaving the bodies where they lay. He looked briefly at the bandits’ three horses, who were now grazing quietly at the side of the road. I wish I had some way to take you guys with me, he thought before he returned to the van. Josh got in the driver’s seat and headed down the highway, thinking it best to get as far away from the scene as quickly as possible.