After spending a year in his mother's pack, Arren has returned home. Only now his best friend hates him, and his father wants to get him mated before he retires. Arren wants nothing more than to spend his days lazily swimming in the lake. But Cole, the new beta, has his own plans. To him, Arren is a brat, and he doesn't want the task of finding Arren a mate. After a good spanking Arren seems to be falling in line, but his submission is just beginning. Cole quickly realizes that playing with this coyote comes with trouble, and that the best mate for Arren might be himself. 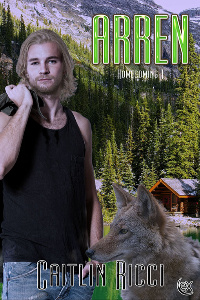 Cole shook out his fur as he lumbered out of the icy lake. The sun wasn't up, so it couldn't have even been six yet. He still had plenty of time to enjoy his morning. The pack would all be asleep for hours. He let his bear self fall away and reached with trembling hands for his backpack. The shift always left him hungry. He sat there, naked and cold, as he ate his granola bar and watched the sun come up over the lake.

The doves had all gone to bed just after sunrise and the crows had taken their places in the trees by the time Cole came back to his house around noon. Bastian, a little hawk shifter who was always underfoot, was waiting for him on his front steps. As one of the pack's three betas, Cole had the luxury of not having to share his home with anyone else like most of the rest of the pack did.

"What do you want?" Cole growled at him.

Bastian stopped tapping his feet and looked up at him with wide, interested eyes.

Maybe he should have bothered to put a shirt back on after his swim. Maybe the boy should have been interested in someone more in his own league.

Bastian smiled and tilted his head back a little more. His hair fell around his face.

He said the name like Cole was supposed to know who that was. "Who?"

"Oh." The one that had gone to spend a year with his mom's pack, then. Leo had multiple kids, spread out over various packs at any given time. Cole didn't bother keeping track of them all. "And? What?" He didn't care what the kid did or where he was.

"Leo wants you to go pick him up. His flight lands at the Springfield airport at two."

Cole had no interest in doing that at all, but if it was a direct order from Leo, he couldn't very well say no, either. He turned on his heel and stomped barefoot through their lakeside community to Leo's cabin.

Cole knocked because that was the polite thing to do, but he really wasn't feeling polite at that moment. He'd had a day of being lazy planned, not one of driving an hour into the city to go pick up some kid he'd barely had any contact with at all. Despite being one of the pack's betas, he didn't know everyone very well. Not even the alpha's son. He had so many of them, and they came in and out of the pack all the time.

It took a long time for Leo to come to the door. Once he did, he was hastily pulling his shorts up and a woman was being shown out. Cole resisted the urge to roll his eyes. It wasn't any of his business if Leo wanted to work on having another child with someone in the pack Cole barely knew.

"Did Bastian find you?" Leo asked him as the woman left and he ushered Cole inside.

Cole nodded. "He did. So, your kid is coming into town?"

"He is. Arren. One of my younger ones. He's twenty-two. A good boy, for a coyote. That's why I want you to go get him. He can be tricky to get along with, though he doesn’t mean to be, generally. He needs help getting from point A to B sometimes."

Cole didn't want to spend the afternoon babysitting anyone. "Bastian could go get him."

Leo huffed. "If that boy was to go out and get my son, they'd likely end up at some casino in Oklahoma. No, I trust you. I know you'll get him and bring him here and that will be it. He's been a wild one, ever since he was a child. He had his year of freedom with his mother, and one with his uncle before that when he was younger. Now it's time for him to get back home and settle down so that he can one day help lead this pack. He won’t ever be alpha, but I could see him being a good beta someday. I know you'll be a good influence on him. He'll listen to you, and if he doesn't you have my permission to smack him upside his head."

Cole pursed his lips. "That's it? Just go pick him up and bring him back here? Then I'll have the rest of the day off?"

Apparently that wasn't the right thing to say, because Leo gave him a dark look. "Do you have something better to do today than bringing my son safely home?"

"I was hoping to have some time for myself, but...you're my alpha. If you want me to go do something for you, of course I will." That, at least, was exactly what Cole knew Leo would want to hear.

Leo gave him an approving smile. "Yes. Well, take him out to lunch first, then bring him back. I'm sure he'll be hungry." Leo reached into his pants pocket and pulled out his wallet. He put a hundred on the table between them and Cole took it. "I expect a receipt."

Leo waved him away. "You can go now. Arren's flight gets in at two. I'll text him and let him know to meet you out front. Take the blue SUV. It's the cleanest."

Cole nodded and left. He was glad to be dismissed. And since he didn't have anything to do until about one when he would have to leave to go get Arren, he went home. Unfortunately, Bastian was still on his front steps. "What do you want?" Cole grumbled.

"Are you going to pick up Arren?"

Cole nodded. "You can't come with me, though."

Bastian cracked a smile. "I know. I already asked, and was told no."