Quinn Turner has spent her life on the run from faceless enemies. The tables turn after an attack one night that leads her straight into the arms of both her Kindreds and she's pulled into their protection.

Sorcerer, Xavier Knight, never expected to encounter his Kindred so late in life, or for it to pull him back into battle in a major way. It brings him face-to-face with an ancient enemy who could be his downfall. More than that, so could Quinn.

Vampire Elder, Dante Graves, has been living his life on the straight and narrow. But his sinful past plagues him when he and Quinn are forced into close quarters. He doesn’t want to taint her innocence with his darkness.

The three of them could be a match made in hell. Or solidifying their bond could be the one thing needed for them and the entire supernatural world to survive the onslaught coming their way.

Xavier rematerialized less than gracefully, stumbling forward several steps before he managed to regain his balance. Normally, he was known for his perfect form and gracefulness when it came to his magic. But he was clearly off his game.

He scanned his surroundings, letting his supernatural awareness guide him. Yes, he was in the correct place now. He could feel the pendant, its specific brand of magic lingering in the atmosphere. It was close, which meant Dante had to be close by, too.

Considering he found himself in a tunnel he recognized as the subterranean escape route located beneath one of his abandoned mansions that was still warded, and he could sense a hell of a lot of vampire energy, that didn’t bode well.

He spun around, heading for the security door…right into the barrel of a gun pointed at his heart.

“Who the fuck are you?” a raspy female voice demanded.

Xavier couldn’t quite believe it. There she was. The raven-haired beauty from his dream come to life.

Although, the sweet, angel-like aspect clearly hadn’t translated over into reality. Instead of an innocent girl sitting on his bench in a white lace dress, there was a kickass woman in jeans and a cargo jacket cursing at him and threatening to blow a hole through his chest with a pistol.

It jolted him back to his mission. And that was when he noticed his pendant hanging from her neck. And, sure enough, just like in his dream, it was shattered.

“How did it break?” he asked, stepping forward and grasping it to study.

She jerked back. “Hey! What the hell? Do you see this gun?”

“Did Dante give this to you? He was forbidden to allow anyone to have this. Tell me what is going on, child.”

“No. But you are focusing on the wrong things, because you’re terrified.” He flicked his wrist. Her magazine dropped from her gun and crashed to the floor, making her gasp. “That wouldn’t have stopped me anyway if it’s any consolation. Also, if I intended to hurt you, someone I have absolutely no reason to, by the way, I could have already accomplished the task several times over.”

“The pendant broke when I fell. The tunnel rocked violently from some sort of explosion. Maybe someone is trying to breach the wards. Or maybe they’re trying to firebomb the place. It could be a Hunter attack after Dante, freelanced by the Order. I came here to warn him about it. He’s my Kindred. Then we found a brand I’ve had since I started being hunted as a teen that could be from some guy who’s supposed to be long-dead. Dante pushed me through the security door with the pendant and told me to press it once I got out of the tunnel because apparently only Xavier Knight can protect me from this Orion psycho.” She sucked in a breath. “So, there’s the answer to all your questions. And I’m guessing you’re Xavier.”

He wouldn’t believe it. There had to be a mistake.

He cleared his suddenly dry throat as his eyes raked over her. What was it about her? His dream seemed to point toward her being his—No! Focus!

“Go wait for me at the end of the tunnel. I will help your…Kindred.”

“Chickenshit,” he heard her mutter.

He stopped short. Had she actually said that? “Excuse me?”

“I called you a chickenshit.”

She was a spunky little thing. A spunky little thing pushing his buttons. Before he could stop himself, he was turning back around and stalking up to her, not stopping when he breached her personal space. He heard her suck in a breath as he towered over her, only leaving a couple of inches between them as he glared down at her. She met his glare, heat spearing his.

It’d been an age since anyone had challenged him in any way. And Xavier wasn’t sure whether the fire coursing through his veins at that moment was irritation or a burning lust to taste her. One that, for the life of him, he just couldn’t seem to control, to get a hold of.

“What’s your name?” he growled.

“Quinn,” she whispered, as though she were in some sort of trance, her eyes wide and glazed.

A beautiful name for a stunningly beautiful woman. He dipped his head lower. “Tell me, Quinn, is this how you always get what you want? Through overt stubbornness? Calling people out?”

“Those are rather underhanded tactics, especially for a good girl.”

Interesting and very telling. He tugged at her belt, hard enough that she’d notice the movement. He watched her reaction, her eyes widen. Nerves. She’d just given herself away. But she surprised him then by suddenly wrapping her hand around the back of his neck and jerking him down to her.

Before he knew what was happening, their mouths were colliding in a fierce lip lock. An intense spark shot through him at the point of contact, like that of an electrical charge, the current shooting through his entire body and jolting every nerve ending to life. It was the first time in years he was allowing a woman to actually kiss him. Hell, he wasn’t just allowing it—he was relishing every second of Quinn’s luscious lips upon his.

He tunneled his fingers into her silky hair and angled her head, as he swept his tongue between the crevice of her lips, demanding more. She parted them on a breathy moan, and he dived inside like a man starved, plundering her sweet mouth. He devoured her, an inexplicable animal hunger arising that just couldn’t be contained taking him over that she seemed to be causing. Something deep within him knew only she could satiate it. What the hell is happening?

He was supposed to be in the middle of a mission, and here he was losing himself in a woman. A woman who was Kindred-bound already to Dante Graves. Wait! Kindred? That spark he’d felt. The unusual sensation of being out of control. Then those words from his dream hit him: “Reina? Right bloodline. Wrong time period.”

Son of a bitch!

He pulled back, holding her at arm’s length. “You’re mine.”

He increased the speed of the twisting, and she whimpered and moaned around her mouthful of Dante’s cock. Xavier watched him throw his head back against the headboard as he stroked her hair buried in his lap.

Xavier smoothed his hands over her firm ass as he watched the plug stretch her for what was to come.

He delivered a stinging slap to her right cheek, making the soft flesh quiver. Then to the left one. Until he was raining down a series of alternating smacks. Her moans were muffled by Dante’s cock buried deep down her throat as she worked him over good.

They knew she enjoyed a nice burn and bite of pain with her fucking now.

“Slap her pussy,” Xavier ordered Dante. “Use your vamp speed,” he added with a wink.

Dante gripped her hair and pulled Quinn from his cock. “Lick my balls, little one,” he said, stroking her face briefly before pushing her head down to his sac.

She sucked one into her mouth swirling it around. Dante nearly shot up off the bed. He grasped her by the hair and tutted at her. “I told you to lick. Not suck.”

She laughed and then went back to work, doing what he’d asked this time.

Xavier and Dante exchanged a look. Their Kindred was a wily little minx. And they loved it.

As Dante’s palm connected with her dripping pussy, Xavier spelled the butt plug to plunge in and out of her ass. Then he resumed raining down his smacks on her ass.

Whimpers and moans from Quinn filled the bedroom. They quickly escalated to shrieks. Her body began to shudder.

“That’s right. You like that burn, don’t you, love? You’re gonna come for us, aren’t you? Go on. Let that pussy explode.”

Dante shoved his fingers deep inside her. “Clench around me. Drench my fingers.”

“Ah! Oh my God!” She threw her head back and shrieked.

Her asshole squeezed the butt plug, almost pushing it out. Xavier eased it out and tossed it aside, gripping her ass as she came screaming, her juices dripping down onto the sheets.

When she tried to relax against the bed, Xavier hoisted her up and positioned her over Dante’s cock. He held it steady at the root, ready to receive her, his eyes glinting with anticipation. His hands joined Xavier’s, helping to lower her down slowly onto his cock until he was buried balls deep, her lying flat on top of him.

Xavier pulled the center of the spreader bar to make her ass more accessible, right as Dante guided her hands to grab onto the bed frame in front of her.

“I can’t move with that bar attached,” she complained.

“You don’t need to,” Xavier told her. “Just lie there and take our cocks.”

He smiled as he watched her noticeably tremble. Yeah, she liked that.

He grabbed the bottle of lube he’d used earlier to insert the butt plug and slicked up his cock. He moved into position and drew his tip around her puckered hole, teasing her and drawing a gasp from her.

And then he eased forward.

“Push back against me,” he instructed her when he felt intense resistance despite his prep work.

He heard her suck in a breath. Then the resistance lessened. He pushed forward and plunged deep into her ass, driving his cock in until her ass swallowed it completely. She whimpered and bucked wildly.

“How are you doing?” Dante asked her while they both remained still for her to adjust to two big cocks filling her.

Dante pumped his hips first. Xavier reared back and plunged in deep next. Quinn screamed out in ecstasy. “Holy shit, guys! What was that? Do it again. More!”

They both chuckled and resumed their alternating rhythm. Their woman didn’t need much of a buildup. She wanted it full-on hard-core right away. She was out of her mind with pleasure. A couple of thrusts in and she was already coming. Dante and Xavier stepped up their game, Dante using his vamp speed to fuck her pussy and Xavier reaming her tight little ass with his big fat cock.

When she clenched so damned hard for the third time, Xavier lost control and spurted his seed deep inside her ass. Dante cursed, obviously feeling his throbbing dick through the thin membrane between them and came with a snarl too.

Quinn climbed off Dante and rolled onto her back, her leg resting on his shoulder, while Dante stroked her hair and rested his head on her breast like a pillow. 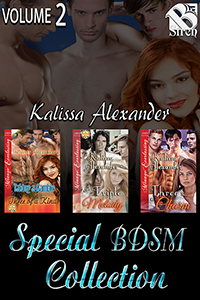