Being a bridesmaid ain’t easy. It’s even harder when all the other bridesmaids have bailed and left you to deal with Angela Stevens, a bridezilla who outdoes them all.

Marnie Flynn knows her best friend is temperamental, but she can’t figure out if Angie just has cold feet or whether something more is going on. It feels like she’s trying to get everyone to walk away—especially the groom, Kai Kemmerlin.

Marnie isn’t too sure about Kai’s reasons for this marriage but knows it’s her job to help the wedding go off without a hitch. She wonders if it’s the right thing to do. 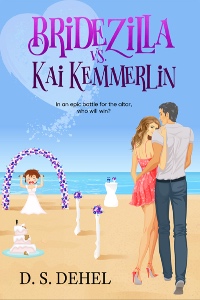 It started with the dress, that damn baby shit yellow bridesmaid dress. A tulle and crochet lace monstrosity that looked like it was stolen from a bargain bin ice dancer. Somehow that fluffy nightmare cost half my pay for a month, as only a designer dress can.

I—Marnie Flynn, bridesmaid extraordinaire and erstwhile best friend of the World Champion Bridezilla of all time, Angela Stevens—was chosen to be adorned with this abomination.

Angie was always one to flaunt her wealth and privilege and make everyone else go along in order to keep the peace because no one—and I mean no one—wanted to be the genesis of one of her mighty rages.

So yeah, it started there when I tried the dress on and knew without looking that it turned me into heroin junkie wannabe. One glance in the mirror confirmed the worst. My auburn hair appeared positively ginger, and my skin had a jaundiced cast. Even better, the scoop neck emphasized my lack of breasts, and the ratty scrappy sleeves added to the cadaverousness, if that is even a word.

I looked exactly like an extra from a cut-rate zombie movie. And in that second, I hated Angela.

This dress had been chosen to make me look as bad as I possibly could.

Wait. Maybe I better explain a few things that happened before the moment I stared at myself in the mirror. And there’s a lot.

First, I would say she wanted to make all the bridesmaids look bad, but I was the only one left. The only one who hadn’t bailed when faced with her ridiculous demand for a destination wedding at an inclusive resort.

Stacy Mc Teer hadn’t been able to afford it and politely declined. When I had offered to pay, Stacy had confessed that she was relieved for a valid excuse to get out of being a bridesmaid.

Amy Lin had told Angie to shove her dress deposit of a thousand dollars and her list of suggested gifts to the bride—and bride alone—for the engagement party.

Britney Waples had texted that she was out once Angie ordered—not suggested—that the bridesmaids go in together for the high-end Weber grill as a shower gift.

Why did I stay?

That’s complicated. Way back in sixth grade, Angie had been the only one to accept me, the curly-haired, skinny new kid. To this day, I don’t know why she did, though I have my suspicions. But golden girl Angie took me under her glorious wing, and I got all the popularity that went with it. And if there was a price to pay from time to time, if Angie was randomly mean and spiteful, it was worth it to no longer be a nobody.

And being on the outs with her was social suicide, so Stacy, Amy, Britney, and I put up with her pouts and snide comments. And truthfully, she was sweet to us most of the time. Until our senior year of high school, when her mom died in a car accident and Angie took her ire out everyone, even her closest friends.

I stayed with Angie as much as I could, even cooking for her and her dad. Mrs. Stevens had considered me one of her family, and I mourned deeply, though I tried not to let it show.

Three months after the funeral, I found Angie staring moodily into her closet, trying to figure out what to wear. “Mom would have helped me with this.”

She’d have yelled at her mom to get the fuck out of her room and leave her alone, but I wasn’t about to argue. “Yeah.”

“And you’re hopeless.” She waved her hand at my jeans and Panic! At the Disco t-shirt.

“Yeah.” I ran a hand over the image of the lead singer as if soothing her cruel words. “I have two moms. I can lend you Cari. She has a good fashion sense.”

“Hmm.” Angie tapped her chin. “Maybe, but then I’d be a lesbian like your moms and you.”

“I’m not a lesbian.” I wrapped my arms over Brendan Urie. I definitely didn’t want him to hear that. He was hot.

“Yes, you are.” She bared her teeth at me. “You just haven’t realized it yet.”

“Yeah. Like a sister.” I kind of wanted to punch her but knew that would only add fuel to the fire.

“Whatever.” She flapped a hand. “Like a sister. Crushing on me. It’s all good. You wouldn’t be the first.”

“Angie.” I flopped back on the bed. “You’re too much of a bitch for me to crush on you.”

“Ah-ha. You do crush on me.” She lunged at me, grabbed my hands, and pulled me up off the bed, which was easy, given she had 25 pounds on me. Then she wrapped her arms around me. “You love me.”

“And I wouldn’t survive without you.”

And that’s how Angie rolled. Obnoxious one minute. Sweet the next. Though, from that day on, she’d tell any guy we were both interested in that I was a lesbian. Because above all, Angie could not stand competition. Even if there was no way I could compete with her gold blonde Barbie looks, she always made sure I was neutralized.

Which brings us back to the dress. I’d have to wear something vile and look hideous because Angie feared I would outshine her in some tiny way. She bludgeoned the world with her insecurity, and as usual, I took the brunt of it.

But being a bride took her pettiness to a whole new level.