When Hunter Mitchell meets Stephanie Lynch during a star-gazing session, he is enamored by her beauty and her brains. Even though he fears she will reject him for his interest in sensual bondage, a relationship starts. To their collective joy, she wants to be tied up as much as he wants to tie her up!

Just as they are starting to learn about everything that bondage and restraint can offer, Stephanie is rocked to her core when she receives terrible news that Hunter is not the wonderful man that he seems to be. Only after she abandons him and the relationship does she discover the horrible mistake she has made. She wants to fix things, but Hunter, angry and hurt, now wants nothing more to do with her.

Can they reconcile their differences and resume the relationship that has stoked their passions? 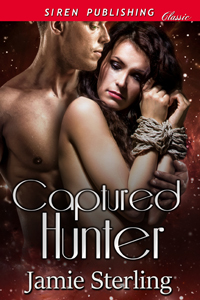 Heat Rating: Scorching
Word Count: 72,345
2 Ratings (4.5)
Contemporary
In Bookshelf
In Cart
In Wish List
Available formats
HTML
ePub
PDF
Mobi
Cover Art by Harris Channing
Reviews
I found this book just a bit slow at the beginning but that did change. There was a lot of technical information about astronomy, but given Stephanie has her doctorate in that field and is a professor at the college I guess it was somewhat necessary.

Hunter on the other hand is a technical writer in finance. He has a couple of hobbies a Hockey league for one, fishing and astronomy. A public event at the observatory is how he meets Stephanie.

I really liked the way the relationship developed with unique dates over the course of a few weeks. The way Hunter is reluctant to reveal his kink and how Stephanie handles it was fun and sensual.

There is a twist that took me totally by surprise. One that I wasn't sure how it could possible be resolved.

I laughed, held my breath and bit my nails a bit. I also learned a lot about astronomy, not something I expect in a romance novel.

I did find a couple of editing errors but not ones big enough to pop me out of the story.

Stephanie’s Monday morning disposition was legendary among her co-workers. Even the most hardcore of the academic team dragged their asses just a little bit down the halls of the university as they faced the prospect of a long work week, but Stephanie never, ever failed to have a disgustingly fresh face and a pleasant grin at the ready. Some of them admired her for it, some hated her, and most were envious.

But even those accustomed to such bliss took an extra second to stare at her today. She looked radiant. The more perceptive women noticed that, although she had on very little makeup, her skin seemed to glow. The men, especially those whose social skills had suffered from years of Spartan scientific pursuit, wondered yet again if her friendly acknowledgment was an invitation to ask her out. Of course, none of them would. Stephanie was, at least in their eyes, quite unattainable.

She reached her cluttered office and noticed that she had a voice mail. It was not unusual. Her graduate students seemed to panic about a paper or a lab assignment somewhere around four in the morning. These messages were often quite humorous, as desperate, sleep-deprived students on deadlines came up with the oddest concerns. She could laugh at them because she had been there many times herself.

She pushed the button on her phone.

“Hi, it’s Hunter. I just wanted to let you know that Saturday night was great fun, in spite of all my wise-ass remarks. I like spending time with you, and a haunted house was definitely a different experience for me. I have a funny feeling there might be more odd destinations if I keep letting you pick where we go on our dates.

Oh, yeah…Theodore says you’re a good sport and he’s sure you’ll get me back sooner or later.

Anyway, I’ll catch up with you soon. You can call if you’d like, of course. See ya.”

Stephanie noted that he had left the message before 7 a.m., meaning he’d had the presence of mind to take a moment out of his morning routine to do so. She pressed the message button again, wondering why she felt the need to hear Hunter’s voice again. Then a third time. And again. With her focus fully on his words she didn’t notice Brenda standing in her doorway. “How many times are you going to play it?” she asked, making Stephanie jump in surprise.

“Geez, Bren! How long were you standing there?”

“Long enough to see you play it twice and hear it once more when I was walking up. Who’s Theodore?”

Stephanie explained the extensive joke to Brenda, who laughed. “That’s pretty creative for spur of the moment,” she said.

“Yeah, I was totally freaked out until he admitted it, and then it was funny.”

“I’ll bet,” Brenda replied, entering her office fully and closing the door. “So, what else happened?”

Stephanie explained his other actions in the haunted house. When she relayed how Hunter had purposefully derailed their sexual liaison and his reason for doing so, Brenda looked puzzled, much as Stephanie believed she had looked on Saturday.

“Do you believe him?”

“Yeah,” Stephanie said. “I mean, he has to be serious. What kind of guy stops things right at the brink of having sex, especially for the first time with a new woman?”

“I thought about that,” she replied, “and I even kind of alluded to it with him by making a joke.”

“How did he respond? Was he defensive?”

“No, he laughed it off. It just doesn’t fit. He was turned on, as much as I was. I guess it’s possible he has some sort of sexual dysfunction, or some kind of phobia about sex, but I’m quite certain he likes women.”

“I am,” Stephanie said, confident in her opinion. “You know, as odd as it sounds, maybe he’s just an honest and romantic guy. I think women get conditioned to look for the hidden meanings in what men say. What if we’re looking for a curve ball when all he’s doing is throwing a strike right down the middle?”

“We all are a little bit,” Stephanie answered.

“True. I think I have to meet him in person. Then I can give you a much better assessment. You know—to see if he’s a ‘man’s man!’” They both laughed.

“Cool. I have to go, we’ve both got stuff to do.” Brenda made to leave the office, but stopped. “I hope, for your sake, that you’ve got a good read on this guy. But just remember, if you are waiting for him to throw a strike, and that ball curves even a little bit, your home run swing won’t be anything more than a big ‘whiff.’”

“Now,” he commanded, his voice thick with pure lust, “take the rest of it.” He released his grip and Stephanie obeyed immediately, sliding her full, moist lips past his head, down his length until she had most of it in her mouth. She bobbed her head and drove her tongue along the broad underside, pushing him further into the delirium of unchecked arousal. Hunter let out a breath as the delicate folds of her mouth wrapped around his rod. He had to focus on something else for a moment in order to keep from shooting his load right then and there. She was that good.

“Exceptional,” Hunter groaned. “You treat it well. I think I’ll keep you here as my hostage.” His words had a pronounced impact on her. Stephanie moaned around the shaft filling her mouth, as if the very idea of being held against her will and being “forced” to fellate him was, in itself, highly erotic. She sucked harder, and her increased effort, combined with seeing Stephanie on her knees in such a submissive pose and tugging at the ropes in a vain attempt to free her wrists, made Hunter’s knees go weak for an instant. She tugged at the tight rope once again, just to remind herself of her condition. He imagined that she was there truly against her will, that she was being held captive solely for his use, and his cock twitched in her mouth, making her yelp in pleasant surprise.

Hunter met her gaze. Those huge eyes, so beautiful and expressive, took his breath away, even more than her oral ministrations. They were clouded with outright lust, but he could also see how much she was enjoying herself—not just sexually, but intimately, showing her joy at sharing this experience with someone else. He let his own similar feelings come through so she could see them, and was amazed to see her eyes crinkle in a smile even as she continued to work on his shaft. Her lips stretched to accommodate his girth, creating the most pleasurable suction that threatened to drain the cum right out of his balls at that very moment, orgasm or not.

Finally, he had no choice but to pull out of her mouth before he exploded. He allowed the head of his penis to slide along her lower lip as he did so, leaving a trail of her saliva and his pre-cum. She did not try to lick it off. She either did not know it was there or did not care, but seeing it was a turn-on for him all the same. He helped her to her feet.

“Oh, please, please, Hunter!” Stephanie’s voice was laden with arousal and a hint of desperation. She pulled once again at her bindings, trying to escape, blissful in the knowledge that she would not.

Hunter just grinned as he resumed his tantalizing caress of her midsection. “I told you,” he said in a calm, patient voice, as if he was reiterating something to a small child, “you don’t get to dictate what happens, or when it happens. Now be quiet.”

“You don’t understand,” she protested. “I’m going crazy here! I can’t stop shaking! You have to touch me, Hunter! I need it!” At that moment, Stephanie seemed convinced that she was going to lose her mind from lust. The feelings filling her body and soul had no words, but it was like a pounding bass drum going right through her, compelling her to do whatever had to be done in order to get him to indulge the beautiful ache between her legs.

“I warned you.” Hunter stopped stroking her hips and thighs and leaned back to the nightstand, retrieving something. “I see that having your hands tied does not give me the control I want.” He walked behind her and pressed his body to hers, resting his chin on her shoulder. “Open your mouth.”

Stephanie wondered what he was doing, but she did not hesitate to obey his command. Despite her willingness, she was still rather surprised when Hunter shoved a wad of fabric between her lips and pulled it tight. It was a kerchief, knotted in the middle, and she struggled with the sensation for a second as Hunter tied the ends tightly behind her head. She fought a brief wave of what might have been panic, which was quelled when he touched her back soothingly, calming her.