When Marco's immortal father remarried an immortal woman, Marco never expected that their children would develop a supernatural ability: Serafina and Valerius can communicate telepathically. Not only that, but they're hearing telepathic cries for help from someone they don't know. Desperate to conceal his family's secrets, Marco decides to investigate the strength of their abilities by taking Valerius with him on a planned visit to an institution in a distant city.

Soon Valerius reveals that the voice's owner is Sergio, an adolescent who has been institutionalized for most of his life. Tests reveal a family connection to Marco's family, so they decide to have Sergio moved to a spot nearer to where they reside -- but they aren't the only ones interested in Sergio's heritage. 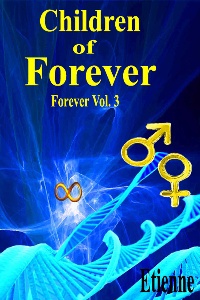 Afterward, we lay back on the pillows and Dani rolled over onto his side, looking at me strangely.

“I know what you’re thinking,” I said.

“It’s amazing, isn’t it?” I said. “Here we are, nearly twenty-five years after we became lovers and partners, and we still turn each other on.”

“I just realized something.”

“I think you’re going into your active period,” he said.

“Really! Been keeping track, have you?”

One of the unique things about Father’s male descendants was their extreme longevity. In addition, and we assumed it was Mother Nature’s way of preventing overpopulation, the males in the family suffered from a low sperm count most of the time. But every five years, our sperm counts rose to normal, and our libidos went into overdrive for roughly six months. Which was why I had triplets and Father had twins and triplets -- we hadn’t been in our active periods when we’d donated sperm. Because of that, we’d both used IUI -- Intrauterine Insemination -- and the surrogate mother I’d hired was put on a regimen of fertility drugs prior to the procedure, as was Angelina. The same cycle held true for Angelina’s family -- the females only went into monthly estrus cycles for a period of six months every five years, during which period their libidos also became hyperactive.

“Really? You mean to say you marked it on your calendar last time?”

“Of course,” he said. “I made some notes as soon as I was certain it had begun, and again when it had passed.”

“And said nothing about it?”

“It was only a year or so after my transplant surgery,” he said, “and we were very busy at the time.”

“You got a faraway look in your eyes all of a sudden,” he said.

“Speaking of your surgery gave me a flashback to your first hospital stay -- after the explosion.”

“You were probably too busy recovering from the attack to notice, but I had a lot of time to reflect on the fact that it was the first time in all our years together that we’d ever spent the night apart. In fact, being alone in a bed was so strange that I had a hard time sleeping.”

“I didn’t have that problem,” he said. “They gave me a pill every night.”

Still later, having secured the house and checked on the boys, we crawled back in bed and snuggled up against each other.

“Can I ask you a question?” I said between kisses.

“Does it bother you that I’m not more verbally affectionate?” I said.

“In the first place, you weren’t raised that way, and in the second place, I’ve never approved of starting the soup with who we love. If every third sentence contains the phrase ‘I love you’, it sort of robs the sentiment of meaning. You don’t have to look any further than my family to see the truth of that -- every one of them will ‘I love you’ to death at the drop of a hat, and we both found out how real that was when I told them I was gay and had a boyfriend.”

“No argument there,” I said. “I remember the occasion quite vividly.”

His old-world and staunchly Roman Catholic family in Boston’s North End had disowned him totally on that occasion. It wasn’t until years later when he was hospitalized after the attack on us that I was able to effect a partial reconciliation by inviting his mother and grandmother to Aragoni.

“In the second place,” he said, “there’s an old-but-true saying, ‘still waters run deep’. You tell me you love me at odd times, when I least expect it. That has much more impact than hourly declarations of affection.”

“And, in the third place, I’ve never been the least bit insecure about our relationship, and after all these years ... wait a minute. What brought this on?”

“I was just wondering,” I said.

“What people think when they see us,” I said.

“Who cares? If they’re observant, they can see how we feel about each other. As for everyone else, screw them.”

“I’d rather screw you,” I said, “speaking metaphorically.”

“No shit, Sherlock. You could have fooled me. Now shut up and either do something about it or go to sleep.”