Crossroads 5: Show Me What Love Is (MFMM)
Dixie Lynn Dwyer
In Shelf
$5.50
All Books In Cart
All Books In Bookshelf
Excerpt

“Shit, they’re starting to leave. I have to stop them. Come to High Avenue.”

“Mia,” he exclaimed and then heard the phone click off. He explained what was going on to Murdock and then gave him the number for the Yarland police to respond.

As he pulled along the side street, he found High Avenue then he caught sight of Mia surrounded by the three men, two of which were holding large sticks or bats. He also saw an older woman getting into her car and trying to reverse out of the parking spot.

He slammed his car into the older woman’s vehicle, and Murdock jumped out of the passenger side of the car.

It happened so quickly. He caught sight of the older woman leaning her head against the steering wheel, obviously hurt. Then he saw Mia defending herself as two men struck at her and she fought back, knocking one down with a high kick and another with a forearm to the throat, but the third struck her across the mouth and then grabbed her, wrapped his arms around her arms and midsection, and lifted her up in a bear hug.

“Stop. Police. Let her go,” he yelled as Murdock knocked out one guy with one punch to the nose. He reached for the other guy, and Mitch went for the one holding Mia. But Mia took that moment to slam her head backward, causing the guy’s nose to break and splatter blood as he released her. She turned and jabbed him in the scrotum. The guy went down to his knees and then slammed his arm against her legs, knocking her onto her back. Mitch tackled the guy to the ground, turned him over, and cuffed him.

The sound of sirens blaring and cars pulling up quickly alerted them that help had arrived.

Mitch turned to look at Mia, who was slow to get up, her lip bleeding. There was dirt all over her blouse and pants.

“Are you okay?” He used his knee to get up off the guy he’d cuffed and pulled out his badge to identify himself to the local police.

She used the back of her sleeve to wipe her mouth. “Fine.”

Murdock approached. He reached his hand out to her. She stared up at him and was going to refuse his brother’s help as she didn’t reach for his hand right away and tried to maneuver up herself, but then she cringed. Murdock grabbed her hand and pulled her up slowly. She pressed against him, and he held her.

“You have a mean right hook, sweetheart.”

“And a few dirty moves,” Mitch added, and she glanced at them.

“You could have been hurt badly, even killed.”

“You should have waited,” Mitch added.

“They would have gotten away.”

They heard some yelling and then turned to see Mrs. Phillips banging the steering wheel and having a tantrum.

“So you were saying something about foul play?” Mitch asked her as he reached for her chin to look at the damage to her lip. She looked so sexy, and he noticed Murdock kept his hands on her hips as he stood pressed against her back, being supportive..

“So, we’re going to go over what went down and try to figure out how you pieced this together,” Mitch stated.

“You stupid bitch. You ruined everything. Everything,” Mrs. Phillips yelled at Mia, and Mia stared at her as a police officer held her by her hands that were cuffed behind her back.

“Got a large envelope of cash in here and some files, too, Detective,” one of the other police officers yelled to Mitch.

“And you ruined your daughter’s life and your grandchildren’s lives by killing your husband for money to buy antiques.”

Mrs. Phillips growled, and the officer pulled her away to place her into the back of the patrol car.

“Despicable woman,” Mia said through clenched teeth and then cringed as she pressed her fingers to her lips.

“Mia, once we wrap everything up here, we’re going to have that drink.”

“You heard me, Mia.” He stepped closer and ran his thumb along her chin. He leaned closer and kissed her temple then inhaled against her, trying to ease a concern he had for her safety by absorbing her scent. She shivered.

“You scared the hell out of me,” he scolded as he looked down into her dark-blue eyes.

“It was fine, and I was fine.” She then gasped and turned toward Murdock, who must have given her hips a squeeze.

“My brother is right. I wouldn’t deny a direct order from him.”

“Really?” she asked and then looked between them.

“We have a first aid kit over here, Detective,” one of the local officers told them, interrupting them.

Mia pulled away and followed the officer. Mitch looked at Murdock, who just stared at Mia as she walked with the officer then looked over her shoulder at the two of them.

“Does Tiegen know about her, too?”

Mitch smiled and couldn’t help but feel excited because even Murdock was attracted to her. They could make their fantasies become a reality with Mia.

“He sure as shit does. You keep an eye on our girl. I’ll give Tiegen the heads-up about her, and we’ll get this mess cleaned up.”

“Our girl, huh?” Murdock asked, and he didn’t look so sure. He actually looked a little worried as he watched Mia.

“She’s going to answer to me for that little stunt she pulled not waiting for backup. Mark my words.” He then walked over toward the van to help try to figure out exactly what Mia had done to finally put these men behind bars once and for all.

Mia couldn’t believe how wild she felt. She was thrusting her hips, clawing at Mitch’s back as he feasted on her breast while Murdock fingered and sucked her cunt. She couldn’t hold back, and she didn’t want to. She wanted to feel more.

“I need to taste her, too.” Tiegen knelt on the couch and reached for her chin. He held her gaze with eyes as intense looking as she felt.

He covered her mouth, kissing her deeply, and then when he released her lips, he lifted her chin.

“You’ll let me taste you, too, and then Mitch?”

She nodded so quickly she felt the heat of embarrassment hit her cheeks. Where had the fear, the anxiety about the inevitable and failing relationships gone to? It was nonexistent when these three men touched her, kissed her, and aroused her body, making her needy for cock and the deep connection only sex could bring.

Slowly her legs lowered, and Murdock gave her a wink as he moved back and Tiegen took his place. She gasped as Tiegen massaged her calves as he knelt between them, and then he gripped her ankles as he held her gaze. He gave them a squeeze. He looked so sexy, intense, and capable that it made her pussy spasm more cream.

“I want you naked on our bed tonight. I want you to put the past behind you, along with everything that ever made you feel like you couldn’t love or be loved, and forget it. For tonight, for this moment, Mia, just let go and we’ll catch you.”

His words brought tears to her eyes but also seemed to bring an encouragement or a push, a challenge, that fed her needs.

She held his gaze and took unsteady breaths as she absorbed the feel of his hard, warm palms moving from her ankles to her inner thighs, spreading her wider.

“Oh God, Tiegen. You make it seem so simple.”

Mitch clutched her chin and tilted it toward him. “It is that simple. Nothing but us together, tonight, matters. Let go and let us make you feel so good.”

Mitch didn’t give her a chance to respond. Instead, he kissed her deeply, plunged his tongue inside, and tasted her fully as thick, hard fingers undid her blouse and her bra the rest of the way. Then she felt the thick, hard digit press up into her cunt. A thumb, Tiegen’s, stroked her pussy lips while he thrust fingers to her cunt. He rolled her cream over her pussy lips, round and round, applying the precise amount of pressure to make her inner muscles tighten, her core ache, and tiny spasms erupt and leak more cream. She was sopping wet and felt so needy for cock she wanted it now.

“We want you, too, baby. Feel how badly,” Mitch told her as he moved her hand over his cock. Then Murdock did the same with her other hand and brought it to his cock. She cupped their balls, leaned her head back, and moaned out another release as Tiegen suckled and fingered her pussy.

It was too much. She shook and cried out.

“My turn,” Mitch said, and Tiegen slowly pulled fingers and tongue from her pussy and moved back.

Mitch immediately took his place and went right in for a taste. He suckled so hard with his lips and tongue that she gasped and grabbed onto his hair and head. She rocked her hips against his mouth and cried out for more.

“I’m on birth control. I’m safe.” She panted for breath.

Mitch pulled back and began to undo his pants. She ran her fingers and hands along his shoulders and grabbed for his shirt, lifting it up over his head as he clumsily got out of his jeans and boxers.

“Upstairs on the bed. We should go now,” Tiegen said.

Mitch stopped, and she shook her head.

“Here. Now. Like this.” They helped her get her clothes off as she started to do it herself and kept falling back. She was so aroused and needy she just wanted them inside of her now.

“Are you sure?” Mitch asked, stroking his cock in his hand.

Her legs were spread wide, her ass and pussy hung off the couch, and she knew this was right. “Yes, now, Mitch. I need you.”

“Fuck.” He gripped her hips and aligned his cock with her pussy as he held her gaze.

“So beautiful. This is going to be fast, baby. You got me there already you’re so sexy. I promise to make it last longer the next time.” He said his last syllables through clenched teeth as he pushed his cock between her pussy lips, nudging to get farther into her tight cunt. 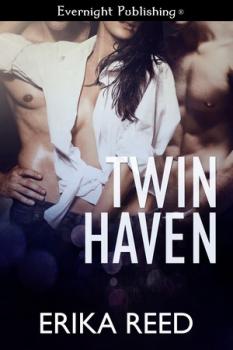