Jasper Reid is everything his fans of The Obsolete want him to be. Whether it’s for the dance-y pop songs he writes, his flirty and mischievous onstage persona, or the masterful way he plays along with the fans’ ships, he’s the perfect performer. On the verge of turning twenty-one, in what’s expected to be the next boyband phenomenon, his life could not get any better.

Until he meets Ryan, an irresistibly attractive dancer, who is added out of the blue to their vocal band. Jasper is quick to call bullshit on the manager’s reason for this addition, but even quicker to accidentally flirt with their new member.

This close to the band’s success, Jasper’s pissed to be the one vocally training this dancing liability. Between Jasper’s outspoken nature and Ryan’s anxiety, tensions rise. When a plan to improve Ryan’s confidence backfires, putting the spotlight on something Jasper’s been ignoring all his life, truths come to light.

Can Jasper let himself get swept up in his own real-life, convoluted, fanfic love story while protecting Ryan from the negatives of fame, uncovering the real reason their manager added him, and saving the band? Or will a photo scandal throw everything out in favor of some satisfyingly petty revenge? 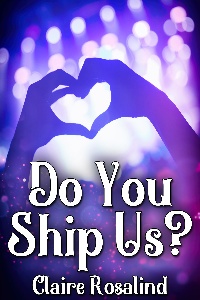 Chris, smug as ever, sits behind his desk, acting like he has an actual job to do that doesn’t involve slowly but surely ruining the lives of his employees.

“Something you want to tell me?”

Jasper shrugs, crossing his arms and sitting back to appear casual and unfazed by the reason his name is trending online today. “No.”

Chris narrows his eyes like he despises Jasper’s calmness. “I’ve seen the photos. You sure there’s nothing you want to say?”

“It might surprise you to know, there’s another photo out and I paid off the person who took them, to not release it.” Chris takes out a photo and places it on the desk.

“I’m not ashamed of whatever is in this photo.”

“What about Ryan? How would he feel about this being released?” Chris slides a photo across the desk, his eyes not leaving Jasper’s.

Jasper grabs the photo and stares at it. It's the same kiss, but a different angle where you can clearly see both Ryan and Jasper, lips locked in the passionate moment.

“You can’t do whatever this is anymore. I want you to deny that it’s a guy you’re kissing. Say it’s Photoshopped or something,” Chris says calmly as he sits back in his seat, showing Jasper his phone with a copy of the photo on it.

Jasper shakes his head. As he takes in the photo, a sense of empowerment comes over him. The photo captured an incredible moment. The moment Jasper knew and didn’t care what it meant, that he liked kissing Ryan. He couldn’t go into hiding about his sexuality. He doesn’t want to, either.

“Or I could come out officially.”

“If you come out, the fans that are hoping to be the next Beth will lose interest in you. Loss of fans means loss of sales.”

Chris’s motives are at least consistent.

Jasper raises an eyebrow. “Have you not heard of fanfiction? At least half of my personal fans have always been writing me being gay. They ship me with all the guys in the band, plenty with Ryan. People love our chemistry.”

“If you care at all about this band, you will keep this to yourself and end whatever’s going on between you two. It’s careless and the impact could be ...”

“The impact will be whatever you decide to turn it into, no doubt. I’m sure Ryan and I, as adults, can handle our personal lives without it becoming an issue for the band. You released the photo to the media, so I would back off, trying to intimidate me into silence, and now you want me to pretend it’s fake and hide my sexuality because you’ll profit more from the speculation?” Jasper leans forward again with a smug expression. “Or do you think being gay isn’t good for publicity?”

“I’m just saying it’s better if you keep this quiet.” Chris plays it down, trying to act like he’s being reasonable after Jasper’s snarky “handle it like adults” comment.

“I did keep it quiet, but this works better for me. Because now I don’t have to hide anything. And if you have the nerve to ask me to deny my sexuality to all the fans, including proud members of the queer community, because you’re not comfortable with it, and anyone found out you were silencing me, that would be terrible publicity, for you personally.” Jasper stares him down for a moment with a stern, threatening, expression before giving an innocent smile, knowing he’d won this power battle at least. “I’m not intimidated by you, and I’m not ashamed of who I am,” he states, turning and walking out of the office with his shoulders back.

“It was Chris,” he announces casually as he enters the band room.

“He outed you? What the fuck!” Blake punches his fist into his other palm, seething with rage for Jasper.

“What are you going to do?” Ryan asks.

Jasper shrugs, typing on his phone as he answers. “He wants me to stay in the closet, so I’m going to make sure that when I come out, it is at his expense. He isn’t getting away with this, but for the time being, I’m going to let him think he’s got me cornered. It’s not like I haven’t been walking right on the boundary of being obvious anyway, so I’ll just be me and let the speculations keep pouring in,” he smiles sweetly at Ryan.

“The hell do you think you are, jackass?” Blake stalks over, raising a fist as soon as Chris enters the room. Simon grabs his fist and pulls him back.

Chris grins. “Don’t even bother, Blake. Jasper, I want you to make a statement about this photo. I’m going to arrange a press ...”

Jasper cuts him off by clearing his throat dramatically before reading from his phone. “In light of the recent photo taken and released without my consent, I’m taking some time for myself and will not be answering questions until I am ready to discuss it. I appreciate the respect for my privacy after this invasive breach. Love you all, talk soon.”

“Well, I’ve already posted it on Twitter, so that’s my official statement. My words, on my terms. Just how it should have been from the start.” Jasper shrugs and looks back at his phone. “Oh, and I retweeted the photo with my post too, so fans can see I’m not ashamed or trying to hide anything,” he looks over at Chris with his ever confident, cocky grin.

“Good. Now that it’s out of the way, you can all get to work and write me your next big hits,” Chris demands in a bitter tone.

“The next big hit you’ll be getting will be from a fucking chair,” Blake says, folding his arms across his chest and glaring at Chris with unwavering hatred.