Grad student Andrea is mostly self-assured and quite open to whatever the world might bring her way. She's sensible, but she's got a quiet belief in the supernatural and a daytime interest in studying history, and finds herself surprised to be falling head over heels for the older woman she just met.

Liz is thrilled to have made a new best friend. Overjoyed with how well they click, how well her son likes Andrea, how much fun they have together, and how easily she can open up, Liz finally considers it might be more.

Blissfully in love, Liz relishes in how all this makes her feel, and how it's almost made her forget that high school boyfriend she's been grieving over for a couple decades.

But maybe things are too good to be true? A family dinner brings up questions for Liz. Questions that prove difficult to answer, and possible answers that defy logic and reason. 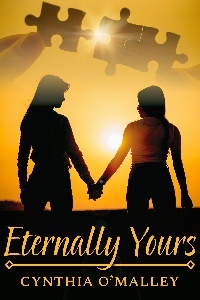 Of course Liz noticed that every time she met up with Andrea for coffee or lunch or, well, pretty much any reason, time seemed to fall away. They nearly always found themselves surprised at how quickly the time flew. She didn't think much of it, other than good friends enjoying their time together. One time, wandering aimlessly, they came upon a little thrift shop. They spent the better part of an hour browsing the aisles, trying on vintage dresses and concert tees.

"How about this one?" Andrea asked, holding up another T-shirt in front of her.

Liz laughed at the nostalgia of the George Michael picture promoting his Faith tour. "Do you even know that album? I mean, it was before you were born, you know."

Andrea gave a mischievous grin. "Yes, but remember, I'm a history student, so I've learned about the music of the dark ages." Liz narrowed her eyes and swatted at Andrea with the scarf she'd been considering. She tried really hard to look serious and stern, but they were giggling into the clothes rack in mere seconds. Taking a breath to calm her laughter, Andrea put the Faith shirt back and kept browsing. "Anyway, I've always been told I'm an old soul."

Liz was still smiling, and nearly didn't hear what Andrea said. She'd been a little distracted by the way her eyes lit up when she laughed, and the way she tried to hide behind the hot pink fringe as her hair fell in front of her face. "Oh?" Her thoughts finally caught up with the conversation. "And who told you that?"

Liz wasn't sure, but she thought she saw Andrea blushing just a little. "Oh, lots of people. My Uncle Bob, my sister Lisa who's a pagan priestess, some lady at the doctor's office once when I was like eight, um, a couple of psychics."

"Ooh, you went to psychics? What did they tell you?"

"Just talked about lots of generic archetypes that I lived as in my past lives. You know, the usual psychic reading stuff." She seemed a little nervous, and Liz thought it must have been worry at being judged.

"You know, I like to think I have an open mind. Hell, I even ..." She paused, realizing that in over twenty years, she'd never told anyone this, and wondered slightly at the flutter in her chest as she realized she felt perfectly comfortable telling Andrea. "I even went to a psychic to try and contact the dead once."

"Oh, now you get to play shocked? Yes, I did. I ... lost someone. Someone very ... my first boyfriend. I heard about this lady when I was in college. She'd contact people's grandparents or long lost brothers or whatever." Her voice dropped as she thought back on that time. She'd been barely nineteen, recently broken up with a jerk she'd met in her geology class, and missing Michael so much she worried it was unhealthy. She kept talking almost unconsciously.

"I wanted to see if she could contact him for me, let me tell him I loved him. I guess I was looking for closure. I needed something to pull me out of a rut, but it didn't work. Madam Deanna couldn't reach him, though. She gave me back my money, said she sometimes couldn't reach spirits if they had moved on to a further away realm. I guess those worries I had of him moving on without me after he graduated came true, even across death."

Before Liz could think much on it, she found herself wrapped up in Andrea's arms, hearing comforting murmurs in her ear and feeling soothing circles being rubbed on her back. "It's okay. Hey, you know Madam Deanna was probably a flake and just didn't know how to tell you how much he loved you and wanted to see you again." Liz returned the hug gratefully and stepped back. She blinked quickly a few times, trying to hide the fact that her eyes had teared up.

"Thank you. I guess I should just be glad people don't think I'm crazy when I reveal that I'm not quite over my high school boyfriend from twenty-five years ago." She smiled, hoping to lighten the mood a little, and was happy to see Andrea smile back as if she understood the unspoken plea to move on and change the subject now. Within moments, Andrea had spotted the vintage hats on a stand in the corner and was dragging Liz toward them while talking about which ones to try on first.