Family Recipe: Justin O'Dwyer is 19. Four days ago, his mother died of a drug overdose, and now Justin is back in Enterprise, Oregon, trying to figure out how to raise the younger siblings he's afraid of losing to the foster system. Justin is completely out of his depth. Harper is six, and hates him. Wyatt is four and doesn't remember him. And baby Scarlett, at fourteen months, has never even met her big brother before. When Scarlett gets sick and won't stop screaming, and when Harper runs off in the middle of the night, Justin is at the end of his tether. In desperation, he knocks on a neighbor's door begging for help.

Del Abbot is 38, and living in his grandparents' old place in Enterprise after his marriage broke down and he lost his restaurant in the divorce. He's a chef, even had his own show on cable for a while, but now he's looking for a new start, if he could just figure out what exactly that entails. When the O'Dwyer family barrels into his life one night, Del can't refuse to help. What begins as a trip to the hospital becomes a regular child-minding gig while Justin struggles to find his feet. And the more time Del spends with Justin, the more they both want more than friendship. But small town life comes with its own bigotry, and, in Justin's case, that bigotry has always been close to home.

When an act of violence threatens to destroy the small family they've built, both Justin and Del need to put aside their pasts and reach for their future together.

Recipe for Two: Wyatt Abbot is 19. On the outside, he lives the perfect life. He has a loving family, he's wealthy, and he has just been given the opportunity to travel to Paris and train under one of the world's best pastry chefs. But underneath all that, Wyatt is struggling. He's battling anxiety, he's scared of the future, and he's struggling to come to terms with the fact that he's genderfluid.

Izzy Kostas is 28, and on parole. When he gets a job at Abbot Organic Produce, it's a chance for a new start. Izzy has his own demons he's trying to overcome, but meeting Wyatt throws even more complications his way. Izzy has always thought of himself as straight, and certainly didn't expect to fall for his boss's little brother.

When Izzy is blamed for putting the Abbots at risk, it jeopardizes everything he and Wyatt have begun to build together. Izzy knows how important family is to Wyatt, and he doesn't want him to have to take sides. But when it comes to found families, nobody is perfect, and there's always room for another seat at the table. 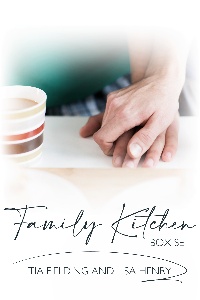 What did he really want from life?

Right now, he didn't know, so he soldiered on, trying to come up with new ways to spin some old recipes for fine dining food that could be made at home. Trim had been a success because of him. Hell, just before he'd left, there had been murmurings of a Michelin star in the imminent future.

The thought of returning to a restaurant kitchen seemed daunting at the moment. Especially if he wasn't the owner of the said kitchen. He hadn't worked for someone else in a decade.

He'd had a short-lived cooking show on cable too, a handful of years ago. That had been fun, sort of, even though he'd hated being directed and how it all was about the "right angles" and how he looked. Maybe that had come through, the way he didn't like that the producer had wanted to concentrate on him more, and that was why they'd axed the show after ten episodes.

The cookbook had been Bernie's idea. She loved celebrity chef cookbooks, and when Del had asked Paul to help out, he'd found a great potential publisher that was very interested. Del just had to find it in himself to write the fucking book first, though, and he wasn't ... inspired.

Del fell asleep on the couch. His body was long ago used to not being nourished the ways he should've been. He'd lived too long on whatever he tasted as he cooked and scraps from this or that.

Not eating caught up with him when he jolted awake at the pounding on his door some hours later. The TV was on low, but the wailing sound of a baby would've pierced a higher volume for sure, based on how efficiently it cut through the heavy wood of Del's front door.

He got to his feet, instinctively alarmed, and then swayed wildly when his low blood sugar caught up with him. "Whoa ..." He managed to make it to the door, his brain still scrambling on to what might be going on. When he opened the door, he suddenly had his arms full of a wailing toddler.

He stared in confusion at the scene in front of him. Two more little kids and a young man that all but collapsed on his porch, pleading for help and apologizing in a tone that could only described as defeated.

"Okay," Del said, automatically feeling the toddler's forehead which was burning up. "Alright, it seems like we have an emergency here."

He turned and walked into the house, calling after his shoulder. "Can someone tell me what's going on?" he asked as he looked around for his car keys. The baby was hot enough for it to be alarming, and he needed to get her into a car and to the hospital as soon as possible.

"The baby's sick and Justin's piece of shit car didn't start," the oldest of the little ones, a girl with horribly unkempt natural hair said in a tone that was surprisingly aggressive for a kid.

"Alright. You're --" he thought for a while but couldn't remember the name of their mother, so he went with "The O'Dwyer kids, right?"

"I'm Del, what are all your names?" he asked as he maneuvered on his shoes while holding the baby.

"And Justin is your big brother?" Del guessed, making Harper nod solemnly. "Okay. Let's get my car, it's in the garage."

Del didn't stop to wait and see if Justin could collect himself enough to get up. Instead, he took the lead and hoped everyone would follow, because now Scarlett had gone quiet, and that wasn't a good sign at all.