Find Me in July

It’s the summer of 1978. Troy Larson is only one university-year away from living his dream as an elementary school teacher. In the meantime, he’s heading to his family’s annual month-long vacation at a Northern Minnesota lake resort. He’s looking forward to time with his best friend, Jessie, and finding out what has happened to him. This year was odd. They hardly spoke on the phone, and Jessie didn’t come home for the usual breaks. When they meet, it’s clear something’s off with Jessie. One day in, Troy secretly stumbles upon Jessie in an illicit act with another man. The incident triggers questions about Jessie’s sexuality and confusion about his own.

Jessie Smith is set to take over his father’s Minneapolis foundry when he graduates from a New York university next year. But the time in New York has taught him how to accept his sexuality, and his newfound freedom is not something he’s willing to give up. As the families meet for their vacation, it’s clear that Jessie is different. After the first day, Jessie sees an abrupt change in Troy, and it’s baffling. The changes in Troy cause a lifetime of repressed feelings to surface in him.

Troy’s pursuit of the truth brings him closer to Jessie than he ever thought he would want to be. He struggles to understand what’s going on between them and how his best friend is turning into more, way more. With the gay rights movement facing legal challenges from Save our Children, can Troy convince Jessie he’s willing to fight alongside him and face any consequences together? 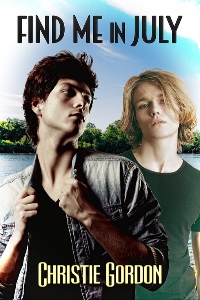 Find Me in July

Troy looked out the window of his parents’ brand new 1978 Chevy conversion van in the late afternoon sun, anticipation tightening his gut. The greenery of the Northern Minnesota woods cut away to the barely paved drive leading to the dark brown two-bedroom log-sided cabin. They were finally here. He had the whole month of July off from his cashier’s job at Target, no classes for the summer, and a month to spend having fun with Jessie and find out what had happened to him. The last year he’d been hard to get  hold of. Troy’s gaze caught on the back of his mother’s short bleached-blonde hair as she sat in the brown passenger seat. His father, in a blue short-sleeve shirt matching his eyes, stopped the van and lifted the shifter on the column under the steering wheel. He turned his head of stubby dirty-blond hair and gazed at Troy. “Here at last.”

“Open the door, Donna.” Troy slapped his younger sister’s arm. “I need to piss like a racehorse.” He shouldn’t have tried to hold it since this morning, but he wanted to get here. Making everyone stop always meant a half hour delay. He glanced at his younger brother, sitting in the back on a brown couch that converted into a bed, reading a paperback, his brown wavy hair hugging his face.

“Take a chill pill.” Donna glared at Troy with her large blue eyes, made even bluer by the blue eyeshadow she insisted on wearing. She flicked her long blonde hair, parted in the middle, behind her shoulder, set her crossword puzzle book on the brown shag carpeting, and slid the door open with a thunk.

Troy crawled over her from his captain’s chair behind his father and out the door, then tugged his t-shirt over the top of his cut offs. “Thanks.” With a quick smile, he held out his hand. “Keys, Mom.”

His mother opened her door, stepped out of the van, then straightened her blouse and smoothed her Bermuda shorts. “Here you go.” The keys she dropped in his hand were chained to an orange plastic diamond with the Breezy Point Resort logo on it.

Troy clutched the keys and trotted to the door. He’d go find Jessie right after his piss. He unlocked a plain brown door, opened it, and strode over thick orange and cream shag carpeting, down a hallway, and into the bathroom, slamming the door behind him. “Shit.” He shouldn’t have waited so long. He was about to burst. He flipped an olive-green toilet lid and seat up with a groan, gazing around him at the orange towels hanging from a brass towel rack above the toilet, the brown, orange and white daisy wallpaper, and the olive-green sink sitting over a rustic wood cabinet. Mom had the place renovated since last year in all the latest colors. While washing his hands, he checked himself in the medicine cabinet mirror.

His hair was on the shaggy side, but he liked the way it had grown out. He looked a little cooler now. The wavy dark-blond hair fell over his forehead in thick bangs, then around his face and down his neck, barely past the neck of his t-shirt. His brows, a much darker shade, were on the thick side and gently curved. His large, blue eyes were rimmed by dense, dark lashes. He smirked. His mother’s friends always commented on his lashes, even though he was a dude. He shifted his face in the mirror, taking in his smaller, gently sloped nose and wide mouth with thick lips.

He wiped his hands on one of the towels and sighed, then lifted his puka shell necklace from under the neck of his t-shirt. Inspection over. Time to go find Jessie.

He opened the door and sauntered out through the main room.

His father carried two green and orange flower patterned suitcases through the door and into the waiting bedrooms down the hallway. “You going to help?”

“In a minute.” I’ll go find Jess first. Troy glanced at his mother.

She grabbed food out of paper grocery bags, set on an orange laminate countertop on the kitchen island facing the main room. The kitchen was filled with rustic dark wood cabinets, olive green appliances, and wood paneling.

“Honey, where are you going?”

“Going to find Jess real quick.” Troy strolled out the door, over the cement entry, and across an overgrown, weedy section between the cabins to the next one over. As he made his way across the side of the cabin, muffled yelling floated out on the air. “What the hell?” He stopped and listened.

It was Jessie’s voice, then Jessie’s father’s. What the hell were they arguing about? He took a few steps more, and a beautiful deep-blue Pontiac Trans Am with the T-tops removed came into view, parked next to a white Cadillac Seville. “Bad ass.” He walked toward the muscle car and stopped. “Damn, Jess.” His friend had told him his parents bought him this car, but it was even better in person.

A clap sounded and Troy turned toward the cabin.

Jessie yanked a white, sleeveless t-shirt over his brown, corduroy shorts and stomped to him, seized his arm, and pulled. “Let’s go.”

“Get in the car.” Jessie shoved him toward the passenger side of the Trans Am, then strode around the front to the driver’s side and got in. He turned the car on and revved the engine.

As Troy’s hand rested on the door handle, he looked over Jessie’s almost black head of straight hair, parted to the side, feathering perfectly around his face, his large blue eyes, in stark contrast to the dark hair, watching him, then the slightly pointed nose and generous lips, always curved in a way that showed off his front teeth.

“Get in here.” Jessie knit his brows.