Finis: The War to End All Wars

Inevitably, the end must come. But only one side can win the war.

Senna Reed—soldier and arson investigator—knows danger. She was there right beside the men in the war—a soldier. Now she’s facing an enemy the likes of which no one in their right mind could have foreseen years before.

Franklin Mann is a soldier first and foremost. Romantic entanglements aren’t his speciality, but Senna, the woman he’s been tasked to work with, pushes all his emotional buttons. He fights the emotional entanglements…until he can fight no more.

The passion between them is scorching, but there’s work to be done. Dirty tasks only soldiers can perform.

The possibility of failure in tracking down the one person who is behind the creation of the super-soldiers and neutralizing them won’t be easy. The battle will require them all to steel themselves, because never before have they seen the likes of what’s to come. 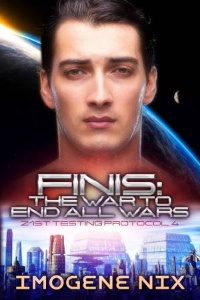 Finis: The War to End All Wars

“Clarissa is cooking, so we’ll join them, then we can take some time, have a drink with our friends, and go into the night. Just us,” he said.

Her tension was palpable, fingers pushing down hard on his. “Is that okay with them?”

“We have a standing invitation, Senna.”

She nodded, a stiff acknowledgement, but he read the nerves in the way she jerked her head up and down. “Okay.”

At the door, he turned and pulled her against him. Kissed her with a light touch then released her. He wanted her to latch on and take more, but this wasn’t the time or the place. Which sucks!

She cleared her throat. “Umm, what was that for?”

“To keep you going through the meal.”

Now Senna laughed—a tinkle that rode across his nerve endings like a gentle caress.

As a couple, they entered the room, and Franklin was aware of the speculative glances that shot their way. He waited for a comment or query, but they remained silent. Not sure if this is good or not.

The meal was yet another simple and basic stew, but tasty and a great improvement from the variety of slush served in the mess hall. Once the meal was done, the clearing attended to, and the goodbyes offered, they rose and thanked Clarissa and Michael for their hospitality.

Senna exited first, but before Franklin could follow, Michael clasped him on the shoulder. “You’ve chosen well, my friend.”

Unable to form a reply, Franklin simply nodded then joined Senna on the stoop.

The breathless quality of her voice melted him. He wondered if it was because she was a strong woman or the arousal that curled around the two of them. Probably a mix of both.

They strode into the night, two people looking for time together. Alone.

Making their way to the gardens at the end of the parade ground, he pulled her down onto the seat beside him. “How are we traveling?”

“On foot?” she quipped back, and he laughed.

He wasn’t a man given to long speeches or second-guessing his actions, yet this tentative romance was beyond his experience. “No, I mean the situation between us. I want more, Senna, but I understand the need to take our time.”

Franklin’s chest expanded as a sense of peace filled him at her words. He wanted and needed this to work. He’d expected to never experience this sense of rightness or belonging, and yet, here he was, with Senna.

“When I was a little boy, my mother would tell me that one day a princess would come along and I’d know.” A lump formed in his throat, the memory hazy, but in his mind, the voice of his mother echoed. “She said I’d know when she turned up, and I would do the right thing by her.” The cold that clutched his guts at the memory of his mother melted away. “I think you’re the princess I was supposed to seek out.”

Her fingers clutched at his sleeve. “I thought we were supposed to take this slow, Franklin. I can’t…” She moved, sitting up and creating a separation between them. The eyes she turned in his direction shined with tears. “I can’t say with any certainty that I’m your princess. I can tell you I’d like to be, but more than that…” She shrugged, and he understood.

“You need time, and so do I. I just wanted to tell you that.” Cupping her chin with his hand, he propelled her forward so their lips met. The kiss was gentle, yet it fanned the flames of desire.

Passion rolled like a wave over both of them as the kiss deepened. Lips and tongues moved as one while he gripped her shoulders so they remained close despite the gap between their bodies. When Franklin and Senna drew away, their breathing was frantic, chests moving quickly as their heaving lungs sucked in the oxygen they both needed.

“I want more, Senna. But not tonight. Tonight we forge what is between us. Tomorrow we do the job, but once that’s done…”

Without the further need for words, they rose in concert and walked back to the lines, hands entwined and heading back to their lonely accommodation. 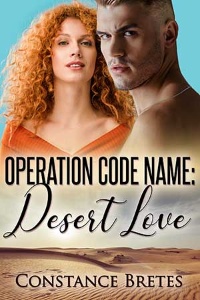