Lucas Miller is having a quarter-life crisis. After a bad breakup, he moves to another town to start college and fulfill his lifelong dream of owning a restaurant. New life is challenging, and Lucas feels out of place wherever he goes. Meeting Evan might be a good thing. Having someone to help him settle if just what he needs.

Evan Henderson has his life planned out. Living on his own has taught him to know what he wants and how to get it. But being on his own means he’s lonely sometimes. Lucas might be the friend he needs.

As time goes by and Lucas and Evan grow closer, the attraction is harder to fight. Can they heal from their past wounds and forge a life together? 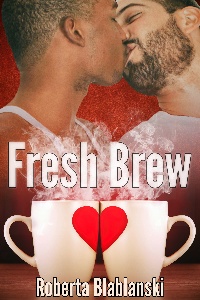 Lucas learned a lot from Evan's impromptu tour, which eased his worries about declining the optional orientation offered when he registered. His decision to enroll at a school hours away from the only home he had ever known was partly spontaneous and partly well-thought out. Regardless of the forethought, Kevin was the sole motivation for Lucas' quarter-life crisis.

Kevin. Lucas bit back a growl as Evan gesticulated animatedly at the next building they stopped at. Evan must have noticed a change in Lucas' demeanor, because he lowered his arms and squinted at Lucas.

"What has the fine arts building ever done to you?" Evan chided. There was concern on his face that belied his jovial tone.

Lucas shrugged. "I think I'm just tired. It's been a long morning."

"Actually, it's afternoon," Evan corrected, checking out the display on his cell phone. "You hungry? Up for having lunch with me?"

How could Lucas say no when he was having one of the best days in recent memory? He truly liked Evan, with his enthusiastic chatter and obvious passion for the university. Maybe with Evan's help, Lucas wouldn't stick out like a sore thumb on campus once classes started.

Lucas hated how insecure he had become. Two years ago, he was a much different person. He was self-assured and knew where his life was headed. Now, he even questioned his choice in beverages.

Evan took Lucas to the local supermarket which had a deli that served simple sandwiches and cold sides. They sat outside at one of the picnic tables in the park across the street and dug into their lunch.

"Are you excited to start your classes?" Evan had a smear of mustard above his upper lip, and Lucas wanted to lean over to lick it off.

Lucas mentally shook his thoughts clear. "I'm more nervous than anything else. I'm imagining being in classrooms full of bright and bushy-tailed eighteen-year-olds. They'll wonder what grandpa is doing in their class." He shrugged to give the illusion that his insecurities held little weight, but he couldn't mask the tension on his face.

"Grandpa, huh?" Evan chuckled and wiped the distracting mustard from his face with a napkin. "It wouldn't surprise me if you found yourself one of the youngest taking some of your courses. Lots of kids I graduated high school with took a gap year that extended to three or four years and are just enrolling in university. You'll fit right in."

Evan's matter-of-fact tone quelled some of Lucas' anxiety, and he felt the tightness in his chest begin to loosen. He was able to enjoy the rest of his sandwich without worrying he'd choke due to the tension in his body.

"Let's make a plan to meet up at Holey Java the morning of our first day of classes, and we can head over to campus together." Evan's offer warmed Lucas' insides, relaxing him further.

"I'd like that," Lucas agreed with a big smile. This new journey may not be so bad after all.