Lilian has always been hopeless when it comes to relationships. When she gets a chance to intern at her favourite digital magazine, she lies to get the job. The editors are looking for a bisexual woman to write for an advice column. Though Lilian is in fact bisexual, her ability to give advice is questionable at best. Knowing she has to keep up the lie to save her job, Lilian goes out on dates to get a better sense of how to write for her advice column.

Unfortunately for her, dating women isn’t as easy as it looks. With the help of her best friend Kristen, she learns how to properly socialize and navigate the often confusing and overwhelming side of discovering your sexuality. Kristen shows her a more adventurous side of life, one that involves speed dating and parties. Will Lilian be able to overcome her fear of intimacy to finally accept who she truly is? 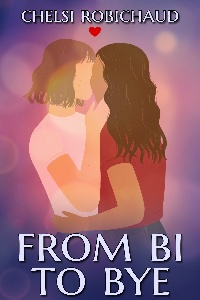 When I got home, I called Kristen.

“So you need to write an article?” she asked. She was sitting at her desk. Behind her was a bed that seemed fit for a princess, with a canopy and everything. “About the life of a promiscuous woman?”

“Georgina didn’t use the word promiscuous, but essentially ... yes.”

Kristen smacked the gum she was chewing loudly against her teeth and blew a bubble. “You’re not very promiscuous, though.”

“Kris, have you not been listening to a single thing I’ve said to you? That’s exactly my problem! I have no sweet clue what to write!”

“Why don’t you just go speed dating or something? Seems to me like a good way to meet people.”

“Oh, what? Do you have a better idea? By the way, staring adoringly at Goth Girl from a distance of fourteen feet does not count as approaching someone.”

I groaned. “I really was going to talk to her today, though ...”

“So you say.” She smirked. “You just need to start throwing yourself into situations you normally wouldn’t. Starting tonight.”

“Bedtime? Seriously?” She snorted. “And you wonder why you’re so miserably single.”

“I thought you said the right person would love me no matter what,” I muttered. “That they’d like me exactly the way I am.”

“Yeah, that’s if you ever go out and meet anyone,” she said. “Do you really think you’re going to meet the love of your life by sitting alone in your room waiting for it to be ‘bedtime’?”

“Stranger things have happened,” I said. She did not look amused. “Okay, okay. You’re right. So what’s the first step, then? Where should I go?”

“Normally I’d suggest a bar, but given how sensitive you are to alcohol, probably a bad idea.”

I nodded. “True that. Where else?”

“Let me see. I’ll check if there are any interesting events in your city tonight.” Her face was illuminated as she switched screens. “There are a few things that might be cool. But nothing you’d like. A dance party ... nope. Cooking classes ... nope.”

“Why not cooking classes?”

She raised a brow. “Do you not remember the time you set rice on fire?”

“Shouldn’t that be proof enough that I’m in dire need of cooking lessons?”

“You’re trying to score a date, remember. Not scare people off.”

“Oh! I found just the thing for you.”

My laptop dinged. She sent me a link. I clicked it. It led to an event page for an anime night. “Oh God.”

“It’s perfect, isn’t it?” she asked, clapping her hands together like a geeky kid in a video game store.

“Because,” I hissed. “Do you know what it’s like to be a female geek amidst a group of men?”

“Because it’s creepy as hell. Most of the men don’t know how to speak to women and end up being really awkward. The others spend the entire time trying to catch me in a lie. I once went to an event like this. This random guy came up to me and, I kid you not, said, ‘Something’s gotta be a lie.’ I said, ‘Excuse me?’ and he said, ‘Either you’re lying about your interests, or you’ve had plastic surgery to look the way you do. Both can’t be true.’”

I rolled my eyes. “No. He was trying to intimidate me into leaving because for some reason he felt threatened.”

“That makes me so frustrated. If I were there, I’d roll up my sleeves and tell them where they can put their sorry excuse for a --”

“Okay, okay,” I said, pinching the bridge of my nose. I was starting to get a headache. “No need to get vulgar.”

“You don’t drink, dance, cook, or speak with men at all,” she teased, mimicking some of the men I had encountered in the past. “What can you do?”

“Nothing,” I said, quickly, then paused. “Unless whining on the internet counts.”

We both laughed. She spat her gum out onto a wrapper. “Even if there’s nothing going on tonight, you should probably start saying yes to more adventurous things.”

“Adventurous?” I intoned, as if the word were some kind of frightening curse.

“Yes. Adventurous for you, that is. You need to get out of your comfort zone. Try new things.”

I crossed my arms in front of my chest. “You sound awfully cliché right now.”

“Every cliché has a sprinkling of truth in it, dear,” she said.