In the 17th Century, the ancient sprawl of Epping forest is bursting with magic and those who go unseen by human eyes: the elves who rule the summer court, and the goblins who rule the winter court. It is said that if a human catches the eye of one of the fey, they are either doomed or blessed.

Wulfren and the Warlock: When Wulfren wakes from a strange dream of a human captor with long silver hair, and grey eyes, his brothers tell him they rescued him from a warlock, and take Wulfren back home to the goblin king's palace. But Wulfren isn’t so sure the matter is that simple. Why was he missing so long? What are the strange dreams of the beautiful man with the silver hair? Dalliances with humans are severely frowned upon, especially by Wulfren’s father, but Wulfren is willing to risk the scorn of his family to find the human who haunts his dreams.

Quiller and the Runaway Prince: After a hard winter, Quiller is sent deep into the forest on a family errand, and is surprised when a human stumbles into his path. Quiller swoops in to pester him, perhaps even eat him, but there is something special about the human: his scent is royal, though he protests that he is not, and soon Quiller finds himself agreeing to help the human with his troubles -- in exchange for a kiss. 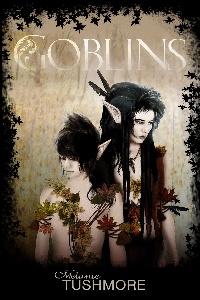 The warlock looked me up and down. A slow smile spread across his lips, and he made a sound which I took for pleasant surprise. "And who might you be?" he asked.

"Wulfren," I said breathily, not sure why I was so worked up, or why I felt it so important that he know my name.

"Wulfren," the warlock said with a smile.

At the sound of my name I could feel the magic around us draw close, threatening to make me dizzy. Shaking my head clear, I demanded, "Who are you?"

A gentle breath of laughter was on his next words. "You may call me Ash."

"Ash?" I repeated, eyes immediately drawn to his hair, the silken blond lengths that framed his face.

He smiled at me. It was strangely hypnotic.

"Wulf," I mumbled, as I darted around the table to sit opposite him.

"Wulf, then." Ash gestured to the second cup. "Please."

I grasped for the cup, trying my best not to stare at him. I gazed instead into the tea and took a sip. Nettle, milk thistle, spice ... and something else. I gulped it down greedily. Its sweetness trickled down my throat, spreading out inside me.

"Many nights you have visited here, without invitation," Ash said calmly. "I wonder, how did you get inside my home?"

I bit my lip, realising that I was in a delicate situation, and decided to stay silent.

Ash made that noise again, a thoughtful hum. He took a sip of his tea then placed it on the table. Raising his hand, opened palm up, he stretched slender fingers toward me. "Tell me, Wulf, who are you?" His fingers curled back into his palm one by one, pulling invisible strings on my will. He simply made me speak.

"I'm the seventh son of the goblin king."

No! My hand clamped over my mouth as soon as the words were out.

Ash laughed darkly. The sound sent a shiver up my spine. "Well, well," he said. "No wonder you found your way in. And tell me, who was that with you before?"

My hand fell like a dead weight and my mouth betrayed me again as I said, "My brother, Garnet."

"Where is your home?"

I tried biting my lip, but it was no use. "The goblin city."

"City? Where is this city?"

"North of here," I said. "Across the river. Past the line of hornbeams, next to a bracken pond."

"What would the city look like to me, I wonder?"

"A ring of rotten tree trunks."

"Very interesting." Ash smiled at me. I was caught in his gaze, trying to determine the colour of his eyes. They were pale, like the silver of his hair, with a flash of violet. "You're the seventh son, you said?"

His eyes flicked down, raking over me. "How old are you?"

"Summer green, by my last birthday."

"Seasons? The seasons ... But that would make you ..." He sounded surprised, his eyes widening. "Age aside, you must be a young spirit."

"I'm not young!" I said, indignant. "I do everything the adults do."

"Including spying on me?"

My face flushed. I didn't answer.

"Who knows you are here, Wulf?"

"No one." My heart thudded all the louder in my chest.

"And what do you suppose I should do with an uninvited guest? Even a royal one, such as yourself?"

I swallowed hard, watching his lips move as he spoke. Full, lush lips. They distracted me from the very real danger I’d stumbled into.

"My home clearly needs a greater spell around it," he said. "I could use your help with that. I'm sure I could coax the magic out of you."

His words set me alight. What was he saying, exactly? Take my magic? But that would involve ... Us, together.

Desire, then confusion, and very real fear washed through me. In a panicked move, I snarled at him. My face changed as fangs filled my mouth. Ash jolted back in surprise. Good. I wanted to frighten him for toying with me, I wanted to spring up and kick his stupid tea over. I'd show him. But when I tried to raise my clawed hands, I found them stuck fast, rooted to my sides.

Ash's low laughter caressed my ears. "You can't move, Wulf. You're sitting on a chair twined with silver birch, upon a sigil of propriety. And now that you've tasted the tea with silver leaf, I will bind you, Wulfren, inside and out."

Horrified, I turned wide eyes up at him. The warlock smiled as he leaned across the table and whispered, "You are mine."