Heart's Desire (A YA Fantasy Romance)

One touch. One look from Morgan’s hypnotic eyes and Skye can’t deny the magnetic pull.

High school senior, Morgan Raines was used to change, whether it was transferring to a new school or shifting into a were-jaguar under the full moon. Starting over didn’t bother him, but finding his mate pinned to her locker by her loser ex-boyfriend does.

Will turning furry during the full moon send Skye running scared or into his arms?

NOTE: This is a re-release under the same title but the author name has changed. All other content remains the same, except the cover art. 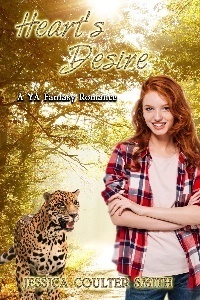 Heart's Desire (A YA Fantasy Romance)

Glancing at him from the corner of her eye, she almost stopped breathing.  He was easily the most gorgeous boy she’d ever seen.  He topped her five-foot-one inches by over a foot.  He was tanned with sandy brown hair shot through with golden highlights.  His chiseled features made her mouth water. If he weren’t a high school student, she’d think he stepped off the cover of a magazine.

“I take it you used to date,” he commented.

Skye nodded, pulling her gaze from his face before she was caught staring. “Until I caught him making out with one of the cheerleaders.  I told him it was over, but he refuses to listen. He thinks he’s God’s gift, or something along those lines.”

He grunted in response.

“He wasn’t like that when we first started dating,” Skye said, trying to explain away Chris’s behavior.

He gave her a skeptical look.

“Where exactly are we going anyway?” he asked, looking around the hall.

“Oh, um, two doors down on the right.  I have English next,” Skye answered.

He grinned. “That makes two of us.”

He continued holding her hand all the way to the classroom.  As they approached the door, he dropped her hand and motioned for her to go in ahead of him. Following Skye into the classroom, he grabbed the empty seat next to her.  Setting his books down on the desk, he glanced her way and caught her watching him—again.  She was so embarrassed. It wasn’t like her to fawn over someone, especially someone she’d just met.

He flashed her a grin and faced forward as the teacher stepped into the room.