Heat Rating: Sextreme
Word Count: 47,402
26 Ratings (4.5)
Contemporary Menage a Trois/Quatre Romantic Suspense
[Siren Ménage Everlasting: Erotic Ménage Romantic Suspense, M/F/M/M/M, HEA]
C.C. Walker has had a sad, tough life. She's ready to move on and start living again. When she takes her beat up car on the road and decides to let fate step in and grab the wheel, she never expects to wind up five hours down south in a place called Treasure Town. But her hunk a junk calls it quits and her new motto in life is "let fate decide," and that's exactly what it does.
As she waits in a bar, she hears about a job opening. One look around the crowded place and the cool first responders and she loves it. She snags a job. It's the beginning of her new adventure and life. But her heart is heavy from the loss back home and she's not quite ready to date, until she meets those two mechanics again, and their other two brothers. Sparks fly and she finally feels happy again.
Things seem perfect until the detective from New York tells her there's a killer on the loose and he's responsible for both her brother's death and her boyfriend's. It's nearly too late when they realize the killer is after her. She's his prize and he's coming to Treasure Town to claim her.
A Siren Erotic Romance
Dixie Lynn Dwyer is a Siren-exclusive author.

Heat Rating: Sextreme
Word Count: 47,402
26 Ratings (4.5)
Contemporary Menage a Trois/Quatre Romantic Suspense
In Bookshelf
In Cart
In Wish List
Available formats
PDF
HTML
ePub
Mobi
Cover Art by Les Byerley
Reviews
Brilliant best in the series so far.
Jlg29
Dixie has done it again! This is my favorite in this series so far. Oh to be C.C. and have these wonderful, sexy men panting after me!!! LOL!
rhondavb
Read more...

Hearts on Fire 9: Her Shadows of Light (MFMMM)
Dixie Lynn Dwyer
In Shelf
$5.50
All Books In Cart
All Books In Bookshelf
Excerpt

Kyle kept looking at the young woman’s eyes as he spoke with her. He was actually trying his hardest not to come across too abruptly even though he’d been told he wasn’t very approachable. But she had these gorgeous dark blue eyes and a killer body with big breasts, narrow waist, sexy hips and ass. Plus, when her camisole lifted a little, he thought he saw a tattoo on her hip. Very sexy indeed.

“What’s your full name and address?” he asked as he stood by the computer.

She rambled off her name.

“C.C.,” she replied and looked away. So she didn’t want to tell him.

“Just for the system, and a phone number where we can contact you as we look over the vehicle.”

“I’ll give you my cell number. No need for the address.”

He got a funny sensation.

“Okay, then. If you want to have a seat, I’ll go check to see what the mechanics say about the car.”

She nodded and then walked over to the set of four seats in the small waiting room, took a seat, and crossed her legs. She had great legs, too. Long, tan, and she was petite. A real beauty.

Kyle closed the door behind him and walked around the car. Frank and a few guys were looking it over.

“Shoot. Nothing you can do to help her?” Kyle asked him.

“I don’t think so. I can try to get this transmission patched up, but it isn’t going to last very long. Could be feet or miles on the road before it goes entirely.”

“What should I tell her?”

“To give me a couple of hours to see what I can do. She may want to go grab some lunch or something.” Frank went back to looking under the hood.

Kyle walked back inside. He saw her sitting there, fumbling with her fingers and looking so sweet and young. Shit.

He cleared his throat as he moved closer and then leaned against the counter.

“Well, my brother said he’s not feeling too positive about fixing the car.”

“He said to give him a couple of hours to try and patch it up a bit, but he wasn’t sure how long the fix would work or if it even would.”

“Wonderful.” She stood up and looked toward the window.

“There’s a cool place down the block called the Station. Great food, if you want to grab a bite? I’ll text your cell phone when my brother has some better idea about the car.”

“Okay. What choice do I have?” She started to head toward the door and then glanced over her shoulder. He quickly looked back into her eyes, peeling them away from checking out her sexy ass in the tight shorts. She was exceptional.

“Be honest, does it look like the car is shot? Because if I’m staying here in town I’ll need to make some decisions.” She looked sad and frustrated. He felt badly for her and couldn’t lie. That wasn’t his personality at all.

“Well, to be honest, by the response from my brother, you may want to start making some plans. It doesn’t look good.” She swallowed hard and almost looked as though she might cry. He felt terrible and took a step toward her. “Hey, but if there’s a chance it can be fixed, my brother Frank can fix it.”

She gave a soft smile, nodded, and headed out the door.

As he watched her walk down the street, he couldn’t help the thoughts that passed through his mind. If she were going to stay, she would need a friend, someone to help her find a place to stay. He shook his head. What the fuck am I thinking? I don’t even know the woman.

Frank couldn’t resist. C.C. looked so incredibly hot in that turquoise dress, her breasts full and on display and her ass round and sexy. He thought about what Mercury and Jenks had told him about the firehouse and what the guys said about her ass and her body and, of course, about the firefighters hitting on her last night. He lost all ability to take things slowly and, instead, decided to take full control of this relationship.

He ran his hand along her ass, squeezing and kneading it as he devoured her soft moans. Running his other hand up from her hip over her ribs to her breast, he cupped a mound and then ran his thumb back and forth across the nipple. He felt her rock her hips against his crotch, and he wanted more. So much more. Without a second thought, he ran his hand under her dress and was pleasantly surprised to find a very skimpy pair of thong panties. She moaned and gripped his shoulders tighter, and he took it as a sign that she was feeling things, too.

He pressed the material down and then gripped her hip, tilting it back slightly so he could find her pussy. She let him, and he moved even faster. As soon as he found her bare pussy, his cock doubled in size. She was clean-shaven, and he wanted a closer look, hell a taste of her sweet cream.

When he caressed her clit, she pulled back from his mouth. “Frank.”

“I’m in charge, you got it? You’re my appetizer. This sweet, wet pussy is calling our names, baby. This is how it’s going down.” He pressed a finger up into her cunt.

C.C. gasped but held his gaze as she stuttered for breath.

“I’m going to finger this tight, wet cunt, and then I’m going to place you on that table and instead of sucking on some clams with butter and sauce, I’m going to suck on this pussy, clit and all. You got it, baby?”

“Get used to it.” He pulled a finger slightly out and then thrust it back in.

He could tell by her expression that she was turned on by his control and orders. It was like being back in the service, but the rewards were going to be greater than anything he’d ever gotten as a reward in there. He would have C.C. entirely.

“So tight and wet. I want to taste you, baby. I want to suck on that tiny sweet clit and make you come hard. You ready for me to lay you on this table and have my wicked way with you?”

“Holy fuck,” Kyle said to the side of her. He glanced at his brothers and then back at C.C., who did the same. Her cheeks turned a nice shade of red.

“That’s right, baby. Look at my brothers. Look at your men. We’re all going to feast on you, and then we’re going to carry you inside and fill you with cock in every hole and claim this body. You’re all ours. You want that too, don’t you, C.C.?”

She was breathing heavy, and he pulled his fingers from her pussy then lifted her up and placed her gently on the table.

He ran his hands up her thighs, spreading her as she leaned back on her palms.

“Tell us you want this,” Jenks stated firmly.

Frank ran his palms up her thighs, pushing the material of her dress to her waist. He peeled down her panties and licked his lips when he saw how clean-shaven she was. He ran his hand along her pussy.

“Nice and clean-shaven. You did this for us? For tonight?”

“That makes us real happy, C.C. Really happy,” Mercury told her and then reached over, cupped her cheek, and drew her in for a kiss.

As Mercury kissed her, his brothers joined in, touching her and caressing her.

Frank spread her thighs wider as Mercury and Kyle lowered her back to the table and took turns kissing her.

Jenks moved in next to Frank.

“It sure is a pretty pussy. You think she can takes our big cocks, Frank?” Jenks asked as he ran his finger between her pussy lips and caressed her inner thigh.

C.C. wiggled her hips and tried pushing her thighs together, but neither Frank nor Jenks allowed it.

“I think we’re going to get her so wet and needy she’ll be ready to take two and even three cocks at once.” As he pressed against her pussy with his finger, she moaned, and he saw the cream drip from her cunt down the crack of her ass.

“Oh, I think she likes that idea, Frank. Look at her ass. She’s going to need a cock in there, too.”

“Then we better get her ready for the four of us.” Frank lowered to his knee and took his time arousing C.C. He blew warm breath against her folds, and she shook from the sensations. 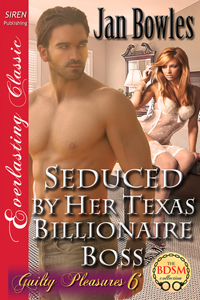 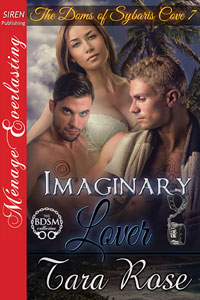 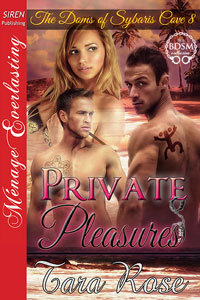