One abducted Earth girl far from home, and two savage warriors with hearts of gold.

Jennifer Smith is on her way to a wild party in the L.A. hills when she's abducted by creepy lizard aliens. She finds herself in a slave collar, far from home and out of hope. When she's taken to a space station to be sold, a huge, bronze-skinned alien charges to her rescue. With the help of his friend, a blue-skinned alien with silver eyes, they fight to save her from the slavers. But escaping the station is not that easy. Jennifer soon learns her two defenders, Nahkar and Darkon, are slaves like her. Only they are forced to fight in the station's huge battle arena, and Jennifer has been purchased and given to them for their pleasure. She refuses to be owned, even by two sexy and tempting males. But that might be easier said than done. Nahkar is caught in the grip of the mara vrhon, a mating instinct that cannot be denied. And Darkon comes from a culture that celebrates the da'katal—the bond of a menage relationship. Being abducted from Earth might be the least of her problems...

Nahkar Ka-Razal might be a famous Ikestran fighter and the arena champion, but he is far from free. He grew up in the station's slums before being made a slave and forced to fight gigantic alien predators for the entertainment of the crowds. The instant Nahkar sees the little human female, he loses all control. One sight of her stirs a ferocious desire inside that drives away all reason. All he knows is that the human girl is his mate, and he will tear apart the galaxy to protect her and win her heart.

As a fighter, Darkon Trava's speed and grace are only matched by his charm and intelligence. He immediately realizes Nahkar, his friend and competitor, is caught by the powerful mating instinct that strikes Ikestran males. But Darkon soon finds himself succumbing to the charm of this Earth female as well, won over by her kindness, spirit, and her dazzling blue eyes. Darkon comes from a culture that celebrates threesomes. Now he must find a way to convince Jennifer and especially Nahkar, who is caught in the possessiveness of his mating fever, that a menage is what they need. That isn't going to be easy. But Darkon is also hiding from his past. The dangerous secret of his royal blood could be the key to freedom and a chance at love...or cost them everything. 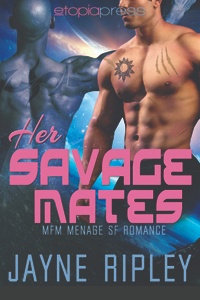