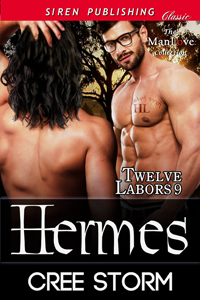 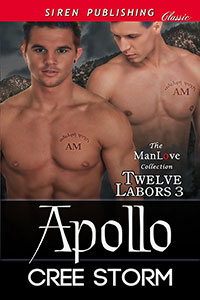 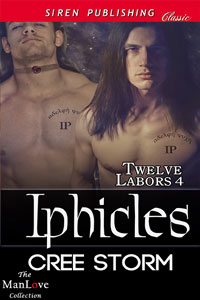 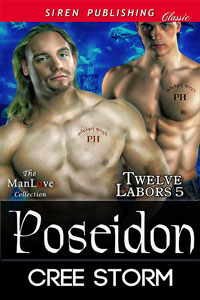 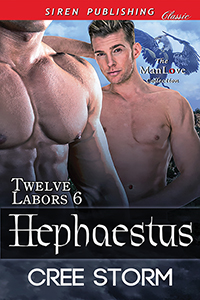 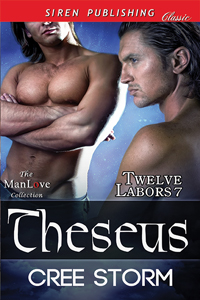 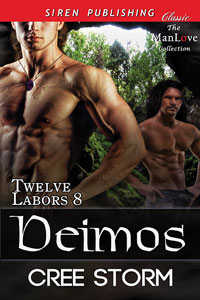 So engrossed in hearing the man speak, Laney didn’t even think about the fact that he was still sitting on the floor, asking, “What were you trying to get him to comply with?”

“It was time for his bath and then bed, but he had other plans, it seems,” Hermes said with a smile.

The man had been beautiful before, but that smile made him beautiful to infinity and beyond. Great, now he was talking in Toy Story terms.

A pig squeal was the only warning Laney got before he found himself on his back once more with a handful of sexy on top of him.

“Damn it, Harley, I swear I’m going to turn you into breakfast,” Hermes snapped.

“I’ll get him.” Cord said, chasing after the piglet.

Hermes looked confused, and then what he was feeling rubbing onto his own hard cock must have registered because he went completely still, turned the cutest shade of red, whispering, “Sorry.”

Feeling a vibration on his chest once again had Laney pulling lightly on his necklace, saying, “What is it with this thing? It feels like a battery-operated massager.”

“What feels like whatever that is you’re talking about?” Hermes asked.

Holding out the cross his mother had given him before she died, Laney answered, “My necklace keeps vibrating and the closer you are the stronger the vibration.”

Hermes’s eyes went wide as he quickly rolled to the side, hissing, “No. No. No.”

Confused, Laney quickly got up and got closer to Hermes. “Yes, it does. Look.”

Bringing his cross closer to Hermes, they could see it physically moving as it vibrated. Hermes backed up, whispering, “It just can’t be.”

Hunter went to them, asking, “Laney, can I see your necklace?”

Hermes started backing up with fear in his eyes. “I need to get Harley back to his room before—”

“You will not move!” Hunter growled, even scaring Laney a little.

Sucking up his fear, Laney stepped in front of Hermes in a protective gesture, saying, “I really would appreciate if you didn’t talk to him like that. I don’t like it.”

Hunter raised a brow, then gave a small nod. “Hermes, hand me your stone.”

“No,” Hermes said from behind Laney.

Hermes grabbed the back of Laney’s shirt tightly and hid his face in it with a muffled, “No.”

Laney looked to where Poseidon stood. He was talking to Hercules and Apollo. Seconds later Poseidon looked in their direction, said something to the two men and their mates, and they all made their way toward them.

“Hey guys, I’d like you to meet Dylan’s friend, Laney,” Hunter replied as they drew closer.

“It’s very nice to meet you. Thank you for helping our family,” Micah said with a big smile.

“Look at what Polly brought me. It’s so he can talk to me all the time and I can listen to music and everything on it. It’s even in pink ‘cause that’s my favorite color,” the adorable mate to Apollo said.

Laney was shocked to see the little guy holding out a Porsche Design P’9982 Smartphone from Blackberry. Those damn things went for almost two grand. That shit was top of the line and way out of Laney’s bank range.

“Murray, Hunter called us over here for a reason. We can show Laney your new toy later,” Apollo gently said.

Murray let out a loud sigh and then pushed his bottom lip out. “Okay, but I really like showing everyone when you get me stuff.”

Apollo lightly brushed Murray’s gorgeous hair from the little man’s eyes, whispering, “I know, sweetie and you can, later.”

The love and adoration Laney saw coming from Apollo about had Laney becoming teary eyed.

“Psy, I need you to have Hermes show us his stone,” Hunter said before anyone else could speak.

Laney heard a loud sigh, and then there was movement behind him. Hermes never stepped around Laney, but held his hand out with the sparkling gem vibrating in his hand.

Amazingly Laney’s cross started actually moving towards the blue stone Hermes held until it snapped onto it like a magnet.

Hercules looked at Laney, asking, “Where did you get your necklace, Laney?”

“It’s been in my family for generations. It seems that every first born in our family has a December birthday, and my mom gave it to me before she died. It’s blue zircon,” Laney answered.

Murray started jumping up and down. “Oh, Hermes, congratulations! I’m so happy for you.”

Laney looked questioningly at Murray. “Happy about what?”

“Well, with the way he dresses I’m not surprised this labor would go to him,” Poseidon muttered.

Poseidon drew back. “What? Obtain the girdle of Hippolyte. He wears them; it only seems fitting he should have to obtain one.”

“Have I not spoken to you about judging how others look and dress?” Hunter asked with a raised brow.

Sighing heavily, Poseidon replied, “I wasn’t trying to be rude, mate. My apologies, Hermes, for my rudeness.”

Hermes’s gasp was the only sound Laney heard before he held up his hand, asking once more, “Murray, why did you congratulate Hermes?”

Laney knew in his heart of hearts that what he was thinking was true. He just seriously needed someone to say the words out loud.

“His stone is glowing and vibrating like my Polly and mine did,” Murray said with a big smile.

Hunter looked at Laney, saying, “It is how we know who our mates are.”

Apollo slapped Laney on the arm, causing him to stumble. He then said the words Laney didn’t want to hear: “Welcome to the war.”

Hermes stepped back, asking, “And you think that by mating me I can bring you happiness? You’re not scared?”

Hermes gave Laney the sexiest smile. “I have no qualm with having a human mate and I do believe in fate. So, if you want me as your mate, then I suggest we make a mating.”

“Make a mating?” Laney asked with a scoff. “What the hell does that even mean?”

Shrugging, Hermes gave an impish smile. “Well, I couldn’t say let’s make a baby because that isn’t possible, but the action has the same result.”

Laney pulled his shirt off, still laughing. “You’re crazy, you know that?”

Kicking his shoes off and bending to take off his pants, Laney was unprepared for the breathtaking beauty standing in all his naked glory in front of him. Hermes simply took his breath away, causing him to barely whisper, “I’ll remember that.”

“Are you just going to stand there and stare at me or have—have you changed your mind?” Hermes asked nervously.

Laney walked over to Hermes and took the man into his arms. “I have most assuredly not changed my mind.”

Hermes brought his hands up to Laney’s chest, rubbing the curly hairs that coated his upper chest, following his love trail until he could clasp Laney’s hard shaft and give it a gentle squeeze. “It feels like you are having many thoughts.”

Pulling out the prostate massager and a half bottle of lube, Laney rasped, “I think I just added a few new ideas. All of which end with my cock in that tight gorgeous bubble butt I have been salivating over.”

Hermes looked at Laney’s hard shaft and licked his lips. Smiling, Laney asked, “Have an idea or two of your own right now?”

“Uh-huh,” Hermes muttered, bringing his hand up and grasping Laney’s hard cock. Hermes turned enough to lick the tip, moaning, “God, you taste even better than I imagined.”

Getting closer to the bed, Hermes was able to wrap his lips around the tip of Laney’s cock and suck it into his mouth, running the tip of his tongue gently over the nerves there. Laney moved his hips in small thrusts and dropped his head back, closing his eyes and enjoying the feel of Hermes warm, moist mouth running farther and farther down his shaft. Hermes took his balls in hand and Laney felt them tighten, causing him to pull back. Hermes made a noise of displeasure.

Smiling, Laney replied, “As much as I want more of that, I also want to be in on the fun. Lay back on the bed, Hermes.”

“Wh—What are you doing?” Hermes panted.

“Getting ready to rock your world,” Laney replied, bringing his face down and taking Hermes shaft into his mouth.

Hermes moaned and did his best to suck Laney down his throat. Both men licked, sucked, and lightly slid their teeth along each other’s shafts. When Hermes slid from Laney’s cock, and then took Laney’s balls into his mouth, Laney thought he might fucking shoot his load right then and there.

Knowing he might lose it before he could put his plan into place, Laney quickly found the lube and unsnapped the lid. Placing a dollop on his finger, Laney ran it around the rim of Hermes’ hole and then gently inserted his large digit slowly as he used his thumb to press a button on the side of the cock ring.

“Mmmmm!” Hermes hummed in shock and bliss as the cock ring vibrated, and Laney let loose on sucking his mate while finger fucking his hole, using one, then two fingers.

Laney smiled around his mate’s shaft then slowly pulled his mouth off, removing his fingers. Grabbing the massager he began to insert it into Hermes’ stretched hole, rasping, “Keep sucking me, mate, or it might be hours before I let you come.”

Hermes rapidly placed his lips around Laney’s hard shaft and urgently sucked Laney to the root. Laney hissed and arched slightly. “Yes, just like that. Fuck, your mouth is amazing.”

Taking a moment to allow Hermes to gain some sort of control, Laney moaned and gritted his teeth. Moments later he grabbed the small black box next to him and rasped, “I’m about to rock your fucking world.”